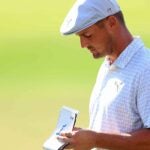 Long-rumored changes to the PGA Tour's yardage book policy are slated to begin in early 2022, a report says.

The PGA Tour will adopt a local rule officially restricting the usage of green and yardage books beginning in early 2022, according to a report from reporter Brian Wacker Monday night.

According to the report, which appears to include a screenshot from a memo shared with PGA Tour players and staff, green and yardage books in their present form will be outlawed from golf’s biggest professional tour. In their place, the Tour’s competition committee will authorize the creation of its own “Committee Approved” yardage books, which the memo says will include traditional green information, but will not allow the raw information on slopes and grades that many have argued serves to undermine the skill of green-reading.

Under the new rule, players and caddies will be allowed to include handwritten notes about greens and slopes, but must do so using only information gained from their own eyes, and not with the aid of levels or other slope-reading technology. Players may also transfer old notes that meet the new restrictions, and may include notes with green observations from watching television broadcasts.

As part of the memo, the Tour says it will work with Mark Long — whose yardage and green books are highly popular among current players — and other yardage book providers in order to craft new books that meet the Tour’s guidelines.

The Tour’s decision should hardly come as a surprise to pros, many of whom voted to outlaw current yardage books at a Player Advisory Council meeting at the Memorial Tournament in June. Changes to the books, which included precise measurements about slope and break, had been speculated for some time. Critics of the books said they whittled an art form (green-reading) down to a science, providing so much information to players, they nullified the value of green-reading altogether.

At the time of the meeting in January, Rory McIlroy, who is the head of the Tour’s council, said the books had removed the difficulty and skill associated with green-reading.

“It’s not that it’s an advantage really, it’s just taking away a skill that takes time and practice to be mastered,” McIlroy said. “I think reading greens is a real skill that some people are better at than others, and it just nullifies that advantage that people have.”

As a local rule (as opposed to an amendment to the Rules of Golf), the yardage and green book change will affect only those competing in PGA Tour events, and not recreational golfers.

The Tour will enact the long-expected changes effective Jan. 1, 2022.