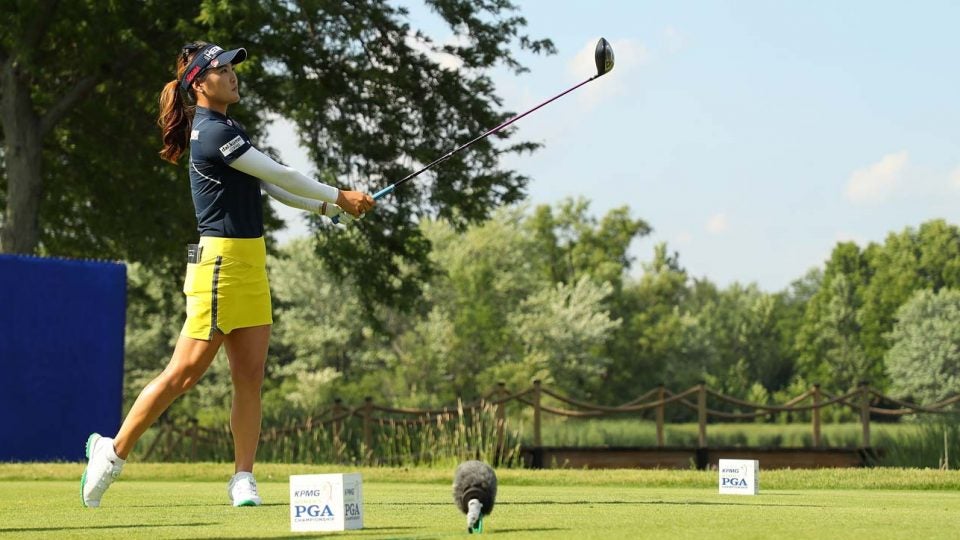 So Yeon Ryu hits her tee shot on the 18th hole during the third round of the 2018 KPMG Women's PGA Championship.
Getty Images

KILDEER, Ill. (AP) — So Yeon Ryu broke away on the closing holes Saturday at Kemper Lakes to take a three-stroke lead in the KPMG Women’s PGA Championship.

The 28-year-old South Korean star birdied the 14th and 15th holes to jump ahead of Canadian Brooke Henderson and finished with a birdie on 18. She shot a 5-under 67 on another scorching afternoon to get to 11-under 205 and move a step closer to her third major victory.

Ryu won the 2011 U.S. Women’s Open and 2017 ANA Inspiration for her major victories. She won the Meijer LPGA Classic two weeks ago in Michigan for her sixth LPGA Tour victory.

Henderson – the KPMG winner at Sahalee in 2016 and runner-up to Danielle Kang at Olympia Fields last year – led most of the afternoon. On a day when temperatures climbed well into the 90s, she was leading by two strokes at 10 under.

The back-to-back birdies by Ryu and two late bogeys by Henderson turned things in a hurry. Ryu also used a neat approach on 18 to set up a short birdie putt on the par-4 hole.

Four strokes off the lead through the first two rounds, Angel Yin was making a push toward the top of the leaderboard. The 19-year-old from Arcadia, California, birdied the 10th, 11th and 12th holes to get to 7 under before a double-bogeying No. 16.

Her 3-wood off the tee hit a bunker on the left side of the fairway and an 8-iron went to the water on the right. She also missed a bogey putt. But a birdie on 18 gave her a strong finish despite the heat.