So long, Swoosh: Tiger Woods swaps out Nike wedges for TaylorMade at Memorial

In addition to his new-look swing, Tiger Woods is also sporting almost all new clubs on the PGA Tour in 2018. Woods recently put TaylorMade woods and custom TW Phase 1 irons in his bag during his comeback. Now he’s adding some more TaylorMade gear to his arsenal.

On Wednesday morning, Woods tweeted a photo of his bag with two new TaylorMade wedges in it, along with the message, “Excited to be back at The Memorial. New @TaylorMadeGolf #MGwedge going in the bag this week.” The new clubs are TaylorMade Milled Grind wedges that don’t appear to have any custom stamping. The lofts are marked at 56° and 60°. Given their rusty appearance, it looks like Tiger put in a lot of practice with the new clubs. Now, they will make their competitive debut.

Excited to be back at The Memorial. New @TaylorMadeGolf #MGwedge going in the bag this week. pic.twitter.com/wq83blgY20 Wood signed on with TaylorMade after Nike’s surprising decision to stop manufacturing golf clubs. The lone surviving Nike sticks in his bag were the two Nike VR Forged wedges that Tiger stuck with while transitioning his long clubs. But now the TaylorMade transformation is complete. 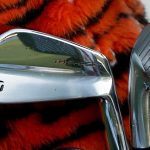 Woods tees off for the first round of the Memorial at 8:26 a.m. ET on Thursday alongside Jason Dufner and Justin Rose.