In this installment of the #AskAlan mailbag, GOLF senior writer Alan Shipnuck tackles all of your questions about the slow play debate on the PGA Tour, Patrick Reed’s loner status and more.

Having interviewed both players, can you please write your hypothetical account of how the Brooks Koepka-Bryson Dechambeau exchange went down, discussing slow play? -@HogansBookLied

BK: Bro.
BD: Dude.
BK: Congrats on being on the cover of the new GOLF Magazine. Shipnuck got me one of those a year and a half ago.
BD: Oh, you wanna make this personal, huh? He did a big takeout on me way back in 2015, when you were still sleeping with camels on the Challenge tour.
BK: My cover story had more words.
BD: Too bad you didn’t know what most of them mean.
BK: Bro, you’re the college dropout. Pretty sure Nikola Tesla didn’t need three minutes to gag a 10-footer.
BD: Say it to my face.
BK: I just did, numbnuts.
BD: What you don’t understand about pace of play is that…
BK: Is this gonna take as long as your pre-shot routine? Because Jena is blowing up my phone – we gotta practice our walk-and-kiss ahead of me clinching the FedEx Cup.
BD: Haha, that’s a good one. I knew you were long but I didn’t know you’re funny, too.
BK:
BD: Anyway, the point I want to make is…
BK: Listen, bro, I’m already bored. In case you haven’t noticed, already this season I’ve taken Dustin’s and Rory’s manhood. Do I really need to crush you like a can of Michelob Ultra, too?
BD: No, sir. Thank you for your time. I’ll put out a statement tomorrow on Instagram.
BK: Good deal. Run along now, bro.

I keep hearing Patrick Reed is a total jerk. Can you compare him to other figures in golf/sports history that weren’t very well liked by their peers? -@SteveThomsonMN

I don’t think ‘jerk’ quite captures it. He can be selfish and immature and standoffish and socially awkward, but I’ve also seen Reed be kind and even charming to fans, volunteers and reporters. He had an extremely insular childhood that was basically nothing but golf, and in college he was unable to relate to or build relationships with teammates at two different universities. Before he had a chance to grow up and figure out life, he married into a family that is extremely tribal.

I think the people around Reed accentuate some of his more problematic character traits. As the ugliness surrounding his estrangement from his sister and parents has gone increasingly public, Reed has become even more of a loner on Tour, forever distrustful of outsiders. It’s too bad Reed has built a fortress around his inner-self because he is one of the sport’s ultimate rags-to-riches stories, the Monday qualifier turned Masters champ who at age 29 has won seven times on Tour, a very healthy total. I fear he’ll never really let us get to know him.

Why should slow play really affect viewers that much? Can’t TV cameras just cut to players who are notoriously slow right as they are about to hit? It’s only a problem in the last couple groups on Sat/Sun, and even then, aren’t most people too engrossed in the outcome to care? -@Kyechsports (and @luxscen asked almost the same exact question)

Well, savvy TV producers have been doing this for decades, but it’s become harder for the slowpokes to hide in the era of social media and the streaming of featured groups, when such cutaways are not possible. Indeed, Bryson’s issues last week were made glaringly obvious exactly because his whole schtick was uncut, just as we couldn’t look away from J.B.’s four-minute layup during crunch time at Torrey Pines.

As the media landscape continues to get more fractured the TV telecast will be consumed by fewer people, and streaming and other a la carte options will make pace-of-play more important. Let’s also not forget the poor spectators on-site who have to suffer through the dispiriting lack of action. So, the very product is at stake for the Tour.

Is Rory having the Greatest Worst Season of all time? 13 of 17 top 10s, 2 wins, likely scoring title and 65 in the Open at Portrush BUT MC’d at said Open, middling results in other 3 majors, probably should have won more than twice. -@AdamOByrneStuff

He’s also having one of the best statistical seasons of the strokes-gained era. But I agree, it’s disappointing that as good as Rory has been he has played very uninspired golf when it means the most. For 99.9% of pro golfers he’s having a career year but, weirdly, I’d give Rory only a B+ on his season. If he wins the FedEx Cup I guess we’ll have to bump it to an A-. 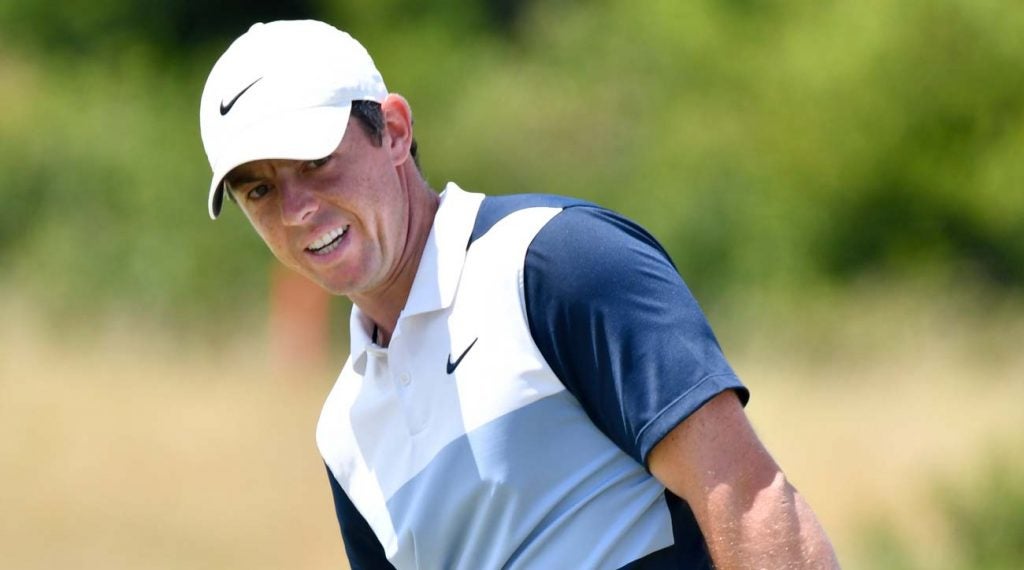 Rory McIlroy sits in third in the FedEx Cup standings prior to the start of the BMW Championship.
Mark Konezny/USA TODAY Sports

Will we be deprived of great tension (like Spieth at The Open) with a crackdown of slow play? Some situations require more consideration and some don’t. -@david_troyan

I think any decent pace policy will take into account exceptional situations. Spieth wasn’t playing slow, he was just confronted with a series of unusual rulings and it took time to sort it out. No penalty was warranted. But three minutes to read a routine 10-footer on a Friday is a much, much different scenario.

Alan, what are your thoughts on players using social media to air opinions on issues such as slow play? Is calling each other out in a public forum good for the game or a necessary tool to affect change? Seems like a Presidents/Ryder Cup team meeting will be awkward. -@forearmshivers

Well, it’s manna from the content gods, that much is undeniable. Like breakups, slow play discussions (and other thorny conversations) are best done in person. But what fun would that be for the rest of us?

Who has better chance of getting picked for Presidents Cup team: Reed, Spieth, or Tiger himself? If Spieth was automatically qualified, does he blackball Reed? Since Spieth is a long shot, does it make it easier for Captain Woods to pick Captain America? -@dafrase

This is an interesting question, given that Reed just surged to 12th in the standings and Spieth is a lowly 27th. There’s no way to defend a Spieth pick except that he’s a popular teammate, he was one of the few Americans to show a pulse at the last Ryder Cup and Captain Woods has a lot of admiration for Jordan’s grit. But if the purpose of the Presidents Cup is to prepare for the Ryder Cup — and Woods is a future Ryder captain — it makes sense to choose both Spieth and Reed so they can hug it out and learn to coexist in the team room sooner rather than later (even if their on-course partnership is almost surely dead.) As for Woods, there is massive pressure from the Tour and TV partners for him to be a playing captain. Tiger knows that and surely would relish the challenge. But as we’ve seen, his back is so iffy it’s impossible to predict his readiness to play. Luckily the picks won’t be made until November, so Tiger can get a lot more rest and rehab before having to make the call. 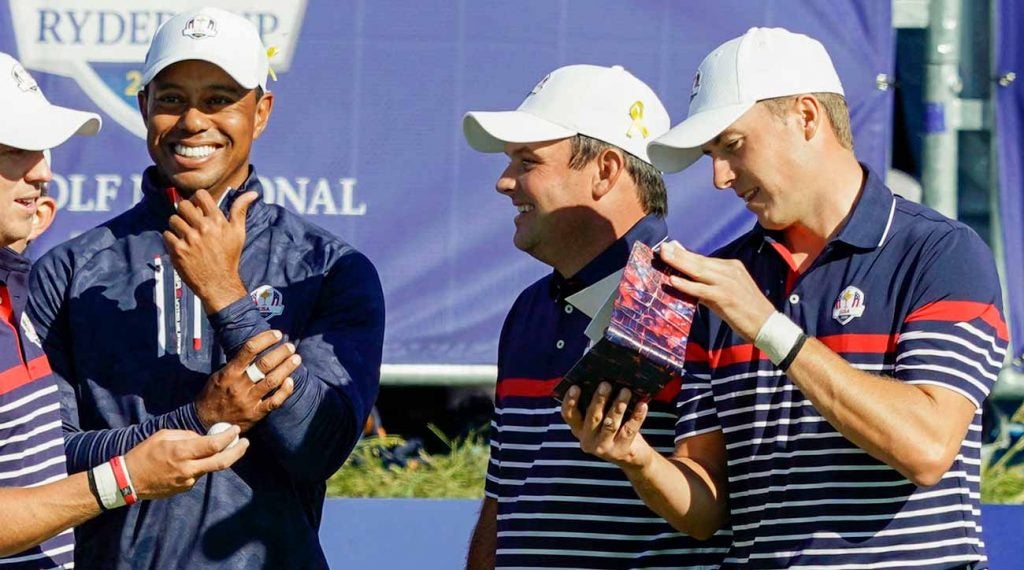 Maybe it’s because I don’t like flying, but if I qualified for the Presidents Cup, I would make up an injury and back out. There just isn’t the excitement level for it like the Ryder Cup. Do you think anyone on the American side will do this? #AskAlan -@War_Eagle1988

They already sort of tried this the last time the Prez Cup was in Australia in December, in 2000, when the entire U.S. team feigned heart defects. Unfortunately, that was after the competition had already begun, and the Yanks got blown out. I could see Dustin saying he tweaked his back lifting a jet ski and skipping the trip. But the really young guys will be excited to play, and the old dudes never know when it might be their last Cup so they will make the trip, too. It’s the established stars in their late-20s/early-30s who will be most susceptible to “injury.”

What is going on with Phil Mickelson? -@TrackingPhil

He’s old. Also, he became obsessed with picking up more speed this year. It worked — Phil’s clubhead speed with the driver is up more than three miles per hour and he’s 20th on Tour in driving distance — but he has lost the glorious rhythm that used to characterize his long, languid swing. The foundation of Mickelson’s game has always been stellar iron play, but this year he’s 126th in strokes gained: approach the green…and his driving and putting stats are even worse. Phil has always been an emotional golfer, but he’s just seemed kind of flat ever since his stellar victory at Pebble Beach six months ago. The guy has been consistently excellent for nearly three decades; it couldn’t last forever. Mickelson turns 50 next year. Hopefully he can still make a few more runs at the big events. He deserves that.

Tournaments
Tiger Woods practices putting at Medinah, but will he play the BMW Championship?

I preferred the women’s amateur final over any other Sunday golf. These young ladies put on a show with their game, competitiveness, and timeliness. They just stood up and executed. The winner lost her coach/caddie with 4 holes to play and played better. Lessons, Alan? -@LabLoverDE

Well, anyone who has witnessed childbirth knows women are a lot tougher than men! It was awesome that Gabi Ruffels and Albane Valenzuela had such a big stage to display their fortitude and talent. I agree, it was a helluva show. Can’t wait to watch both of them follow in the footsteps of Jennifer Kupcho and Maria Fassi and bring their talents to the LPGA.

If we took every Twitter suggestion for what would make the PGA Tour better/more watchable, what exactly would we end up with? -@linksplayers

A much better product…and glorious anarchy.