Welcome to Short-Game School, where one GOLF staffer (with, you guessed it, a bad short game), works with a top teacher to get better. You can read along and follow the journey, and hopefully these tips can help your game, too.

There’s no need to sugarcoat it — I’m terrible with my wedges. Or, better said, I was terrible with my wedges. I’m still far from great, but I spent the last couple of months working on some things with teacher Jon Hearn, who works with Justin Rose on his short game, and I’ve seen great results. Luckily, the part where I’ve struggled the most, chipping, is where I’ve seen the best progress thus far. That’s really all due to one drill, which Hearn shared with me and that I’ll now share with you.

But before we get to that, let’s go through some quick background.

I’m a bogey golfer that doesn’t play much golf (dad and city life are getting the best of me), which means my feel and, ultimately, my short game, are rusty. Back in the day I could get up and down with my eyes closed, but eventually I lost that edge and any sort of chip around the green, whether it was from a tight lie or in the rough, was more often than not a mix of chunks or blades. Even worse it started to get in my head. I stood over the ball — whether it was around the green or 50 yards out in the fairway — and just knew it was going to be bad. My confidence was shot.

But this winter I decided I was going to work on my golf game, especially my short game and irons. I asked our Instruction Editor, Luke Kerr-Dineen, who I could find to help me with this treacherous quest, and he recommended Hearn, a 34 year-old British PGA Professional who is the Director of Albany Golf Academy in the Bahamas and the newly launched Nexus Golf. Hearn turned pro at 16 but an injury in his mid-20s halted his playing career, and he turned his focus to coaching. He’s coached some of golf’s most successful players on the PGA and LPGA tours. He’s currently with LPGA rookie Albane Valenzuela, a former Stanford All-American who was twice the U.S. Women’s Amateur runner-up and got as high as second in the Women’s World Amateur Golf Ranking, and he’s also the short-game coach to Tour star Justin Rose.

I reached out to Hearn and he was happy to help. We talked for almost 30 minutes when we connected via phone, and one of the first things he said caught my attention right away:

“If you were given the right information, which I’m going to give you, you’d notice a meteoric rise in your ability,” he said.

That was good enough for me. Hearn and I have talked several times since and shared swing videos and tips, but one of the first drills he gave me was to improve my chipping. Here’s what it is, and it’s easy enough for you to do at home too.

Step 1: Setup. One of Hearn’s main philosophies is eliminating as many variables as possible by getting the club head, hands and chest linked together. The chest is the engine, he likes to say. Make sure the handle is in front of the ball, and with the lead arm produce a lower-case y.

Step 2: Ball position. Hearn explains there are three spots to chip from based on the kind of shot you need and lie you have: left armpit (usually for spin), sternum (bounce and check) and right armpit (to release). “From these three ball positions you can pretty much produce any shot known to man,” he says.

Step 3: The swing. Hearn wanted me to open up my front foot a touch (it helps with hip rotation) and also recommends opening the club face a bit to engage the bounce. Lastly, put about 70 or 80 percent of your weight toward your target. 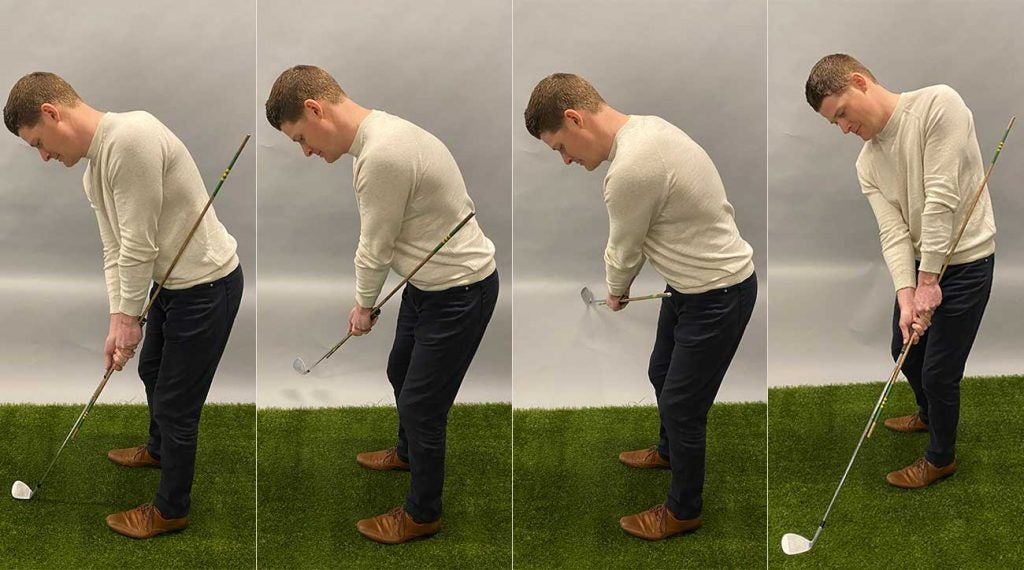 “Having seen your action, it’s going to feel very Bryson-like to start with,” Hearn told me, which I don’t think was a compliment but hey, this is a free (I think?) lesson. He added: “You can be very, very good, very quickly with this. It’s shocking how good you will get, the pattern is going to be very tight.” Here’s how it looks for a different angle: 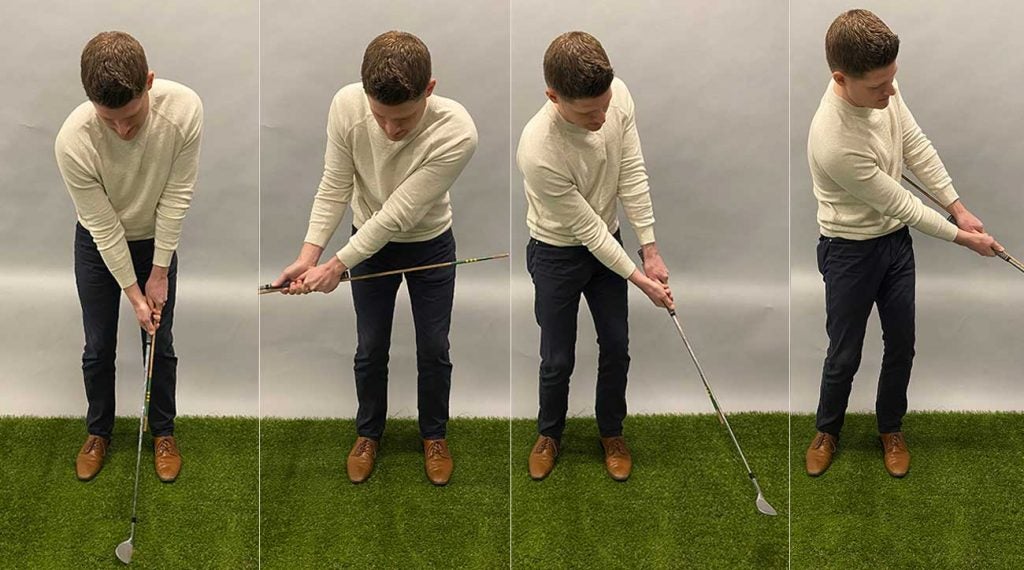 It worked! I hit a handful of nervy shots when I started this drill but eventually got the hang of it. After doing it on the range I went on a golf trip the next week and did it before every round. It not only trained my body to hit those shots, but it gave me an easy swing thought when using it on the course. I told myself the aid was still there, and swung as if it was, and it paid off. I thought of this drill when hitting off tight lies and in deep rough and over bunkers and more. I felt the most satisfaction playing the final round of a 72-hole weekend, where I found myself hitting several tricky pitches yet pulling them off. On one, I was about 40 yards short of the green in the fairway and had to clear a bunker to a front pin with little room to spare. This shot would have usually been a disaster, but I actually stood over the ball and felt confident about it. I swing and hit a high, lofted flop to four feet.

“It’s going to be a really fun journey,” Hearn said. “Then you will hit shots you wouldn’t believe. This is where amateur golfers can shot 77 instead of 85 very quickly.”

There’s more progress to come — we’re working on full swings next — but I’m already all in.