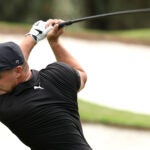 Kyle Berkshire explodes his golf ball into the screen of a golf simulator ahead of him. He walks up to the screen to watch its flight, then steps back for the landing.

Berkshire raises his right arm and flexes it. But he wants to hit again. He can make it a round number. He knows he’s got that extra yard in him.

Berkshire has won six world Long Drive events, including last year’s world championship. His longest drive in competition is 492 yards. DeChambeau is the Tour’s longest driver. His average of 322.1 yards last season was the best since the Tour began tracking the stat, in 1980. When the two, along with social media golf sensation Garrett Clark, met up at DeChambeau’s home in Dallas, it was, as DeChambeau said, “sick.” Eight-iron-longer-than-a-PGA-Tour driver sick.

“Great to finally get together with @brysondechambeau!” Berkshire wrote on Instagram this weekend. “Pretty amazing to see the things he does to be the best. He will definitely be getting even faster and longer.”