Should Augusta National change this part of Amen Corner? 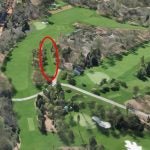 The opening to the right of the trees on the 11th hole at Augusta National.

If once a year we get to praise Augusta National and everything that makes it great, well, once a year we should also assess the property for possible alterations.

Augusta National is near-perfect. It challenges faders and drawers, bombers and short-hitters. Set up with firm greens like it was a week ago, there might not be a fairer test in all of pro golf. But one aspect of the course is becoming increasingly questionable: the opening to the right of the trees that line the right side of the 11th fairway, as we first noted in 2019.

One of the greatest stretches in all of golf goes Tough Par 4, Nervy Par 3 and Gettable Par 5, but the Tough 4 has an accessible strip of land located right of right. There’s the fairway, then there’s trouble, then there’s the beaten down first cut, trampled by patrons all week that offers an unimpeded look at the green. It’s more lush than you’d think.

The small inequity of the 11th was on full display last week, particularly during the final round for Jon Rahm. Rahm turned in four under Sunday afternoon, bogey-free to that point, when he sent his tee shot on 11 high and to the right. Right of right, actually.

“Slice, SLICE. Keep going right,” he said to his ball. “Get into that gap that everybody hits it on. Please.”

“Everybody” was said sarcastically. You could tell that Rahm, fantastic driver that he is, doesn’t love the idea of a bailout where bad drives suddenly offer good angles. And with frequency.

Bryson DeChambeau intimated to GOLF.com that his preferred line on 11 is right up over those tall pines along the right side. If he overcooks his draw, like he did in November, he won’t find trouble — just the left side of the fairway. If he misses out to the right, well, that’s not a bad deal, either, as the grassy plot right of right is just not a bad place to play from. DeChambeau did it himself during the first round and made a stress-free par.

When Rahm eventually reached his ball and began his club selection process, his caddie, Adam Hayes, thought 7-iron was the play, downhill from 203 yards. Rahm chose to hit a 3/4 6-iron, drawing off the greenside bunker. It was perfect and, for him, not that difficult.

“I mean, we have no business having a shot like that after the tee shot,” Rahm said. “They’re definitely going to plant trees in here next year.”

They in this scenario is Augusta National, one of the governing bodies in the game. They plant trees all the time. They uproot trees all the time, too. Not 24 hours after Hideki Matsuyama won the green jacket, a tree removal company was on the grounds tearing down a tall one from behind the 14th green. So Rahm’s quip, while candid, was fair. Augusta National could easily plant trees in that area to make punch shots to the 11th green a challenge. The punch shot that Matsuyama hit Saturday afternoon, fresh off a rain delay, wouldn’t be nearly as feasible with a group of tall pines infiltrating his options.

These 2021 examples weren’t one-offs. There was also Tiger Woods in 2019. Woods was still chasing Francesco Molinari when he got one of two incredibly lucky breaks at Amen Corner. Woods pumped his tee ball on 11 high and right — really right, soaring up and over the trees. But then … no reaction. The most emotive player of all-time didn’t say a word. He knew it wasn’t a fairway hit — far from it — but he also knew that his shot may have been so bad that it was actually quite good.

“That’s dicey,” Frank Nobilo said on the broadcast. Perhaps he was recalling his years of contention when the ball didn’t fly as far and that landing zone just wasn’t possible. Nick Faldo referred to the opening as a “gully.” It’s more of a channel.

Woods ended up just fine, in almost the exact same place Rahm was this year. And unsurprisingly, Woods played virtually the same shot, a tightly-drawn mid-iron to the center of the green for a two-putt par. Again, perhaps that’s fine with you. Many people were happy Woods had a mostly clear view to the green. Molinari, surely, was not one of them. Nor were the groups ahead, all of whom made their mistakes on the less forgiving 12th tee rather than on the 11th.

Augusta National sets up Augusta National for every Masters with a singular goal: present the world’s best players with a tough but fair test. When it comes to the tee shot at 11, could enough stray drives — and commentary from the likes of Rahm — convince the club to tighten the screws and eliminate the bailout area? As ever with ANGC, it’s hard to know. Check back next April.