#AskAlan mailbag: Have you ever witnessed a rules violation that went unreported?

I believe that cheating is something that comes from your soul. Do you believe in “once a cheat, always a cheat,” or is redemption possible?? #AskAlan -@JSwinging

This is a question for a philosopher, not a sportswriter! Human nature is so complicated and fascinating, and the complexities don’t end when a man or woman — flawed like all of us — turns pro. If you think of the young Vijay Singh, hitting balls all day under a mango tree in Borneo, you can imagine the desperation he felt to make it to the big leagues, and how he might be tempted to, say, turn a 5 into a 4 with the stroke of pencil. No doubt many pre-med majors, feeling a similar pressure, have cheated on a big test. Are they bad people, or did they just make a mistake? Can they be forgiven? Do they deserve to be? Everyone will answer these questions differently based on their own life experiences and personal credos. But for redemption to be granted the first step is to admit you screwed up. Sports fans are a forgiving bunch. So are sportswriters. But don’t piss on my leg and tell me it’s raining. That’s why fans and scribes are so infuriated by the Astros… and Patrick Reed. For him to say he didn’t feel the sand — twice! — is simply not credible, as Brooks Koepka helpfully underlined. Imagine if Reed had said, “You know, I was feeling a lot of pressure, and my mind went blank, I’m not sure why I did that but I obviously messed up and I’m really sorry and I’m going to do better going forward and in the meantime donate all of my Hero winnings to Bahamas relief efforts.” I think many fans would salute him for coming clean and cut him some slack. But Reed’s defiance — the shoveling at the Presidents Cup was particularly grotesque — shows that, for now, he is well beyond redemption.

But for the grace of God, my family could have been ripped apart after my mother’s death. Don’t you think Reed’s family should be out of bounds to journalists and fans? -@JoeGunter

Well, his wife was his caddie for years. Now her brother is on the bag, and the looper’s antics at the Presidents Cup got him booted off the bag for a day. Reed’s wife and mother-in-law are sometimes wilding-out on social media. So, the family he married into have made themselves an inescapable part of the story. As for Reed’s own estranged family, they were escorted off the grounds at the 2014 U.S. Open and they believe it was because Justine called security on them; that’s a pretty public event. (John Bodenhamer, the USGA’s senior managing director of championships, said USGA officials removed Reed’s parents after consulting with the police who said that the couple was making “intimidating movements” toward Justine.) Reed’s mom has engaged with writers and golf fans on social media, so it’s hard to say they are seeking privacy. Reed won the most coveted tournament in golf while his family was a couple of miles away, watching on TV in their Augusta home because they were not made to feel welcome at The National. Tiger’s wins in 1997 and 2019 were defined by familial hugs, just as Phil’s triumph in 2010 was made unforgettable because he won it for his cancer-stricken wife. It would have been impossible to write about these tournaments without this family context. After all, it is the human element that makes sports so riveting. To fully understand the meaning of Reed’s Masters win it was necessary to know about all the unpleasantness that he somehow plays through.

Hey Alan, have you ever noticed a player commit a rules violation up close and personal that went undisclosed? #AskAlan -@GoranBarnes

I’ve seen plenty of drops from hazards that looked a little generous but few things in golf are more subjective than where a ball crossed an unseen line a couple hundred yards away, so you can’t really say those were outright rules violations. I’ve also witnessed the exact scenario that Peter Kostis described of Patrick Reed, whereby a player puts a couple different clubs behind the ball to “assess” the lie and in doing so the grass gets pushed down, making the ensuing shot easier. Again, this is a very grey area — intent is everything, and that can not be seen without an x-ray of the soul. Most rules violations are exceedingly subtle, and without replays they’re hard to detect. So in all my years of prowling Tour events I can’t say I’ve glimpsed anything egregious.

Where are you on Peter Kostis’ position that reporters are there to report on the story as opposed to being a part of the story? I agree w/Peter wanting media to avoid getting dragged into controversy. If you saw Reed or anyone improve a lie/violate a rule, what would you do? -@KeithKHorton

This is a fraught issue. Just ask my friend and wingman Michael Bamberger, who reported a blatant Michelle Wie rules violation nearly two decades ago and still occasionally takes flak for it. Kostis is correct that it’s best for reporters to avoid becoming the story, but I think the sanctity of a professional tournament is bigger than that. If I witnessed a violation I would certainly report it … but probably from my burner under an assumed name, so as not to get dragged into a needless controversy. When a player breaks the rules they should pay the price, not the person (player, caddie, spectator, scribe) who happens to witness it.

How will the budding friendship of Bryson and Patrick bolster USA’s chances in the 2020 Ryder Cup and beyond, and how would you like to see either or both of them in the 2020 Olympics? -@GolfingBrock

This budding bromance is actually a huge development for Team USA. Both Reed and DeChambeau are so young and talented they are going to figure in many more Ryder Cups. Managing their, uh, quirks and finding willing playing partners figures to be one of the toughest tasks for every future American Ryder Cup captain. But if all that unorthodox mojo can be contained within one pairing, and if these spiky personalities can bring out the best in each other, well, a huge problem has been solved. As for the Olympics, I can think of a few more cuddly ambassadors to represent the Stars and Stripes. (Lolz.) But Reed and DeChambeau are each, in their own way, among the most compelling figures in the game. With golf still fighting for its place in the Games I’d rather have Bryson and PReed in Tokyo than some other blander, more boring Yanks.

Can and should the Tour suspend Cryson for his antics slamming down spike marks? He needs to be slapped several times by someone who he respects and the Tour needs to let him know his behavior isn’t acceptable. #AskAlan -@TheGhostOfHogan

A suspension would be a stern reaction but I think it’s warranted. Every time pro golf goes to Mexico City or Saudi Arabia or some other far-flung destination we are force-fed pablum about how the players are growing the game. It follows that the all these new fans in golf-starved markets are watching closely to learn the mores and etiquette of the game. So the good people of Mexico City and far beyond have now been taught that when you make a terrible stroke and badly miss a putt the appropriate reaction is to smash up the green in absurd attempt to prove that the poor grass is at fault, not the player or his weird technique. In general, it feels like golf is at an inflection point, where we are being forced to examine difficult questions about the rule of law and the fundamental nature of the equipment and playing fields. Some things are worth preserving so I think the time has come for the Tour to take a harder line on player misconduct. 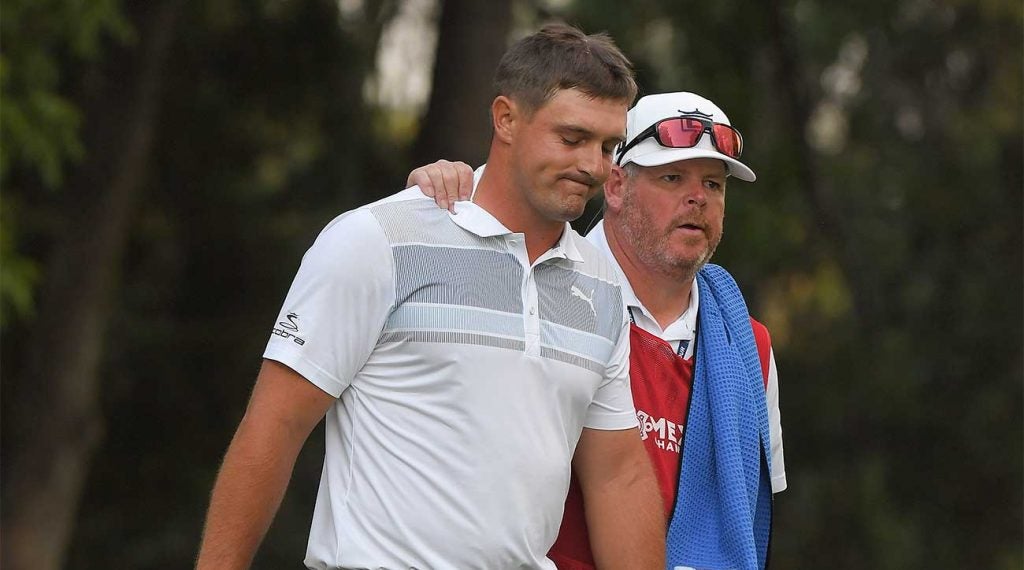 Bryson DeChambeau walks off the green after the final round of the WGC-Mexico.
Getty Images

I think that I’m in man-love with Viktor Hovland. I think he’s going to be a European mainstay for two decades in the Ryder Cup. How worried are you now with him, Rory and Jon Rahm looking like dynamite? -@GolfJoss

It’s impossible not to like this Hovland character. His game from tee-to-green is simply awe-inspiring and what a fun, fresh character he is. No doubt he’s going to be a force in the Ryder Cup. Rahm, too, even though his Paris debut was quite shaky until he outlasted a sore, stiff and exhausted Tiger in singles. And Rory is Rory — he has been spectacular and disappointing, sometimes during the same Cup. (His 11-9-4 record is solid but not commensurate with his all-world talent.) As I know from experience, it’s folly to predict the Ryder Cup too far in advance. Cornerstones crumble, heroes rise and fall, captains make inexplicable decisions (see Furyk, J.), unbeatable golfers drown balls at Augusta and never recover (Molinari, F.). But I can say with some certainty it’s going to be fun to watch Hovland for many years to come.

Does JT hurt himself by not keeping his reactions to bad shots in check? -@EugeneLForsythe

Every player handles setbacks differently. Tiger burns hot for a very short period of time, expelling the poison from his system but always getting back in the right head space for the next shot. Thomas has certainly had some Sunday implosions where it looks like he’s lost control of his emotions. But when he’s playing well he shows plenty of fire, too. Bottom line: it’s pretty hard to argue with 12 Tour wins, including a major, at the age of 26.

#askalan Why are there terms for better-than-birdie, like eagle or albatross, but there are no terms for worse-than-bogey? They are just called a double bogey or a triple; why not a pigeon or a cuckoo? -@elgransenor1

Because making doubles and triples is already so painful do you really want the added insult of having to tell the officious scorekeeper in your group, ”Put me down for a dodo.”

What will Bryson serve at the 2021 past champions dinner in Augusta? Protein shakes? Kombucha? Will every asparagus stalk be the same length? -@DS_Maples323

All excellent choices. One dessert we’re not likely to see: humble pie.