Second Stage of the Web.com Tour’s Q-School a Test Unlike Any Other 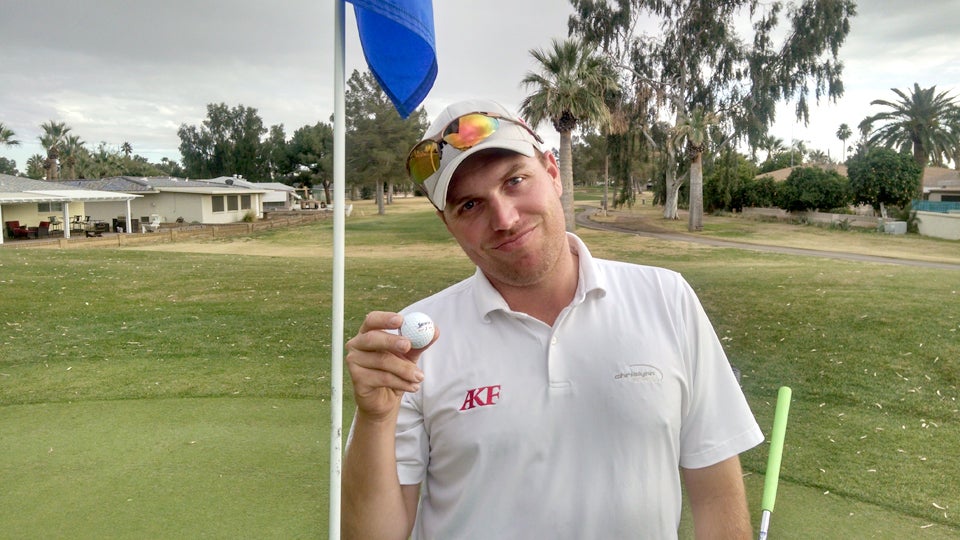 Mike Van Sickle holds up his ball after making a double eagle earlier this year at the Arizona Golf Resort the day after Phoenix Open qualifying. Van Sickle and others face a tough test ahead with the Web.com Tour’s second stage of Q-school.

BROOKSVILLE, Fla.—The next two weeks are arguably the two most important weeks on the Web.com Tour.

Welcome back to the grinder that is not-so-affectionately known as Q-school. This is the qualifying process where players advance to the Web.com Tour, the next best thing to making the PGA Tour.

These next two weeks are do-or-die for players at five different qualifying sites. But this isn’t the final round of qualifying. This is the one with the most pressure—the second stage. It has more pressure because if you don’t advance to the final stage, you go home with nothing. No status, no tournaments to play, zip. At least at the final stage next month in Florida, every player gets a Web.com card, which comes with a few perks, even if their tour ranking doesn’t get them into many—or any—Web.com events.

If you don’t make it through the second stage, you’ve got nothing. If you do make it, you’ve still got nothing but you’ve got a chance for something.

Approximately one-fourth of the players at the five sites will advance to the final. One 72-hole qualifier will be held here at Southern Hills Plantation this week, with two others going on in Kingwood, Texas, and McKinney, Texas. Two more will be played next week in Beaumont, California, and Plantation, Florida. The final, which has been reduced from six rounds to four, will be played Dec. 10-13 at PGA National in Palm Beach Gardens, home of the PGA Tour’s annual Honda Classic.

There aren’t a lot of big names teeing it up this week at Southern Hills Plantation. Sunday, I saw Casey Wittenberg walk past en route to the putting green. He’s a former U.S. Junior Amateur champion and a U.S. Amateur runner-up. He finished 13th in the 2004 Masters, the lowest Masters finish by an amateur in 41 years. Wittenberg, the 2012 Web.com Tour Player of the Year, is 31 now. 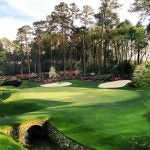 Bubba Dickerson and Nick Flanagan, a pair of former U.S. Amateur champs, are in the field here. So is Georgia Tech star Ollie Schniederjans, who finished 12th in last summer’s British Open as an amateur.

One other face I recognized on site is Mike Van Sickle, my son, a former All-American at Marquette University, Byron Nelson Award winner and author of a piece about struggling in golf’s lower echelons earlier this year in Sports Illustrated.

He took a break after a practice round to do a Q&A, Van Sickle on Van Sickle, and discuss this week’s big event:

So what’s it like to be back at second stage of Q-school?

Didn’t you say that once before?

MVS: Being back at this course for a third time, I feel more at ease. This is my (pauses to count on his fingers) seventh time? Yup, seven. It means I’m getting old. I did kind of feel like one of the older guys in PGA Tour Canada this summer. I’m 28 and most of the guys there were 23 to 26. But with age comes wisdom.

Not hair, though. You can blame me for bad follicle genetics. Is Q-school different from normal tournaments, like the ones you played in Canada?

MVS: There’s definitely a different vibe this week. There’s a sense of finality on the horizon. You finish 30th in Canada, you go, Oh well, and go on to next week. At Q-school, there is no next week and no next year. And everybody knows that.

What have you learned in Q-schools past that might help you this week?

MVS: The last two years at Southern Hills Plantation, I’ve been nine under par going to the 17th hole the last day and that’s been close to the number to advance or right on it. You don’t want to cut it that close because one bad break or unlucky bounce can ruin even a good shot and cost you everything. Two years ago, I hit a 6-iron from 195 yards on the par-3 17th hole. The wind was swirling and gusting into my face. I stared down what I thought was a perfect shot. I mean, I was sure I accidentally stuffed it close to a back pin after trying to hit the middle of the green. I was shocked when it flew over the green. I caught a bad lie and was short-sided and made a bogey that put me one over the cutline and kept me from advancing. I wasted some shots with my short game the first three rounds that put me in that position. So don’t waste shots, don’t put yourself in that position. 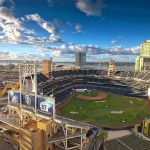 You may also like Photos of The Links at Petco Park

How important is it to play a course you already know?

MVS: The biggest thing is, you show up and your game plan is already set. Your practice rounds become more about getting a feel for how the course is playing instead of trying to figure out how to play each hole and where not to hit it. I played a practice round Sunday with Kyle Wilshire and on the ninth hole, a somewhat drivable par 4 that should be a good birdie chance, he told me he played that hole in four over par last year hitting assorted fairway woods off the tee. We talked about our game plans for that hole and agreed that hitting driver as close to the green as possible was the best strategy. The most important part of his story is that you’ve got to learn from your mistakes and adapt.

So you have an actual game plan for this week?

MVS: Yeah. Make birdies. And if not, make pars.

How did you travel to Florida and what kind of accommodations do you have?

MVS: The first day, I drove 12 hours from Pittsburgh to the Hilton Head area in my red 2011 Camry, which has about 125,000 miles on it and is going strong. It rained the whole way. It’s always a long ride through West Virginia, where it’s against the law to drive while you’re talking on a cell phone. Chatting with my wife, Kristine, always makes the time go faster but West Virginia is a four-hour blackout for us. Fortunately, it was a Sunday so I could listen to Sirius XM radio and follow along with how bad my Fantasy teams did. I just can’t understand why Matt Stafford didn’t throw the ball to Calvin Johnson more. But seriously… why didn’t Matt Stafford throw the ball to Calvin Johnson more?

Spoken like a true dispirited fantasy league coach. Then what?

MVS: After a night at a Fairfield Inn off I-95, I went another six hours the next day to Tampa, where I pried myself out of the car and practiced at TPC Tampa Bay. It was pretty hard trying to “activate my glutes.” And every other body part, for that matter. This week, I’m staying at a Hampton Inn in Brooksville. It’s 45 miles north of Tampa and about 20 minutes from the course. There just isn’t anything closer.

What kind of fine dining are you planning?

MVS: The over-under number on meals at Applebees this week is seven. Last year, we went in there once and the waitress said, “Oh, you’re back!” Yeah, the other options are a McDonalds, a Wal-Mart and a Toyota dealership. So yeah, we’ll be eating good in the neighborhood a lot this week.

Do you have a real caddie this week or am I on the bag again?

MVS: Didn’t I mail you a pink slip? I’ve got Paul Ferrier, a Scot who lives in the Tampa area and is a good player himself, on the bag. He played college golf at UNC-Charlotte and has had PGA Tour Canada status. Our hands are still ringing from our high-five last year after I chipped in for birdie on the 72nd hole and finished two shots inside the cutline.

What’s your schedule after Q-school?

MVS: Hopefully, more Q-school—the last stage. I’m planning to stay in Florida and avoid what happened last year when I flew home for Thanksgiving, couldn’t practice in the cold weather and then caught a bad flu bug on the flight back to Florida and was bedridden for a couple of days before Q-school. Like I said before, you have to learn from your mistakes and adapt.

MVS: Augusta. A lot of golfers would say it’s also the capital of Georgia.

I knew you knew, I just wanted to make sure you got one answer correct today.

MVS: Thanks. Where did you get these questions, Mr. Burgundy? The toilet store?