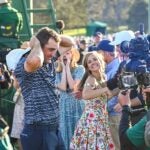 Where was the first place Scottie Scheffler went to celebrate his Masters win? Home Depot, of course.

How would you celebrate your life’s crowning achievement? With a party, perhaps? Or how about a multi-day rager in Vegas? Or maybe you’re the understated type — opting for a nice dinner with close family and friends.

Scottie Scheffler did none of the above. In fact, it’s up for debate whether he actually celebrated at all, as he explained in an interview with GOLF’s Sean Zak.

Instead, the 2022 Masters Champ marked his career-defining, expectation-defying victory with a trip … to Home Depot.

“The week after the Masters I went to Home Depot and got some lawn equipment and just cleaned the backyard for four days straight,” Scheffler said with a laugh, recounting his post-tournament week. “I love being outside, but I wasn’t going to come practice or do anything like that.”

So, rather than practice, the 25-year-old Texan set aside his green jacket and got to work on his green thumb.

It was a perfectly on-brand reaction for golf’s swashbuckling superstar — the same player who once admitted he’d never dreamt far enough to becoming the No. 1 player in the world.

Still, he wasn’t fully capable of avoiding the gravity of his Augusta National achievement.

“Meredith and I — there’s a few places we like to eat around our house,” Scheffler said. “They’re like two minutes from our house. And so when we come back from a tournament, we don’t have groceries or anything, so we can’t cook. So we go out and get breakfast and coffee and all that stuff. And we went to our usual spot and it was like alarming how many people were coming up. But it was because it just happened like 12 hours prior. People were surprised that we were back.”

But as Scheffler admits, even the attention from his Masters win didn’t last very long back in Texas.

“It was funny,” he said. “Meredith and I got home, were like, ‘Man, that was a lot. Like, that was weird.’ And then we did it again Tuesday and one person said hello. [Laughs] So it was right back to normal for us.”

To hear the rest of Scheffler’s interview with GOLF, check out the video above, or click the link here.