‘Who has ever 4-putted to win the Masters?’ Scottie Scheffler laughs about viral gaffe 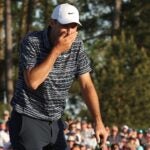 Scottie Scheffler covers his mouth after missing a short putt on the final hole of the 2022 Masters.

Scottie Scheffler can laugh about it now. Well, actually, he laughed about it then, too, when he was in the moment and it happened at Augusta National on Masters Sunday.

You probably know the story. Scheffler came to the 72nd hole with a five-shot lead and four-putted the 18th green for a double-bogey 6. He still won easily, but has anyone ever won a major golf tournament by four-putting the final green? Good question.

In his post-win press conference, Scheffler didn’t talk much about the four-putt (and why would he, he just won the Masters), but did say, “I tried to keep my head down and just keep doing what I was doing because I didn’t want to break my concentration. The minute I did was on 18 green when I finally got on there and I had a five-shot lead and was like, alright, now I can enjoy this. And you saw the results of that.” [Laughs]

Speaking to GOLF in a recent sit-down interview, Scheffler said he found the good in the viral blunder.

“I told [my wife] Meredith after the round, we were walking off. I was like, ‘Man, I’m actually kind of glad I four-putted because if I would have made the second putt or made the first one, I would have been an emotional wreck,'” Scheffler said.

“I think just because I would have gone from being so in the zone — like everybody’s cheering, my family is there, Meredith’s family’s there — to where it’s like it was in Austin [when I won the match play]. Suddenly, Oh my gosh. I just won the Masters. This is insane. I would have just been a wreck. But since I four-putted you’re able to kind of laugh at it like that was really funny. Who has ever four-putted to win the Masters?” [Laughs]

“You got to be able to laugh at yourself,” Scheffler added.

This week Scheffler has another big tournament on his schedule, the PGA Championship. He’s among the favorites to win in Tulsa, Okla., when the action gets underway on Thursday.

You can check out the entire interview with Scheffler here.