With a style all his own, Sandy Lyle (probably) says goodbye to the Open 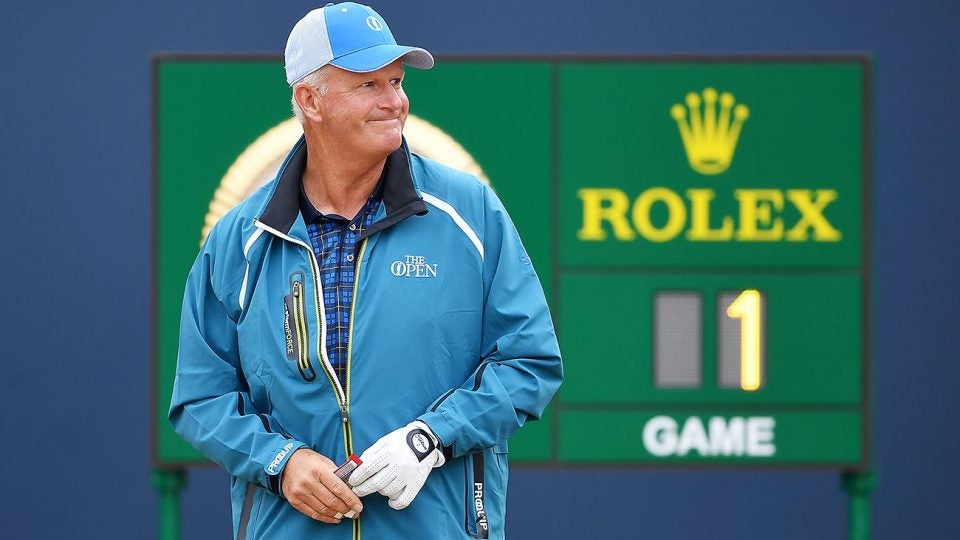 CARNOUSTIE, Scotland — I’ve always had a soft spot for Sandy Lyle. My first British Open was in 1985, the year he won. I had caddied for a player who did not make the cut and watched Sandy up-close through the final nine holes on Sunday. About five years later, I found myself in the cottage home of Alex Lyle, Sandy’s father, then a retired golf professional who had one main swing mantra for his son: “Make it pretty.” Another of his phrases was “tempo, not temper.” It was another era in the game, of course, and it’s curious to think that Lyle was, in his day, a certifiable power player. In the Lyle-Faldo-Seve-Woosnam-Langer gang, all born in 1957 and 1958, Lyle was the smash-it guy. Ballesteros and Woosie were long, but not like Lyle. Sandy kept it simple, overthought nothing, never said a mean word about anybody, was passed over as a Ryder Cup captain because he was too nice and too old-fashioned, and played his way into the Hall of Fame. He played big amiable golf all his life. Ian Woosnam became Ian Woosnam by trying all his life, from boyhood on, to beat Sandy. Harold Woosnam, Ian’s father, once told me that Ian’s boyhood cry was, “I’ll get you one day, Sandy Lyle!” You could fit two Woosie’s in Sandy’s big-boned Scottish frame.

On Friday, Lyle likely played in his final Open. It was his 43rd. Past champions age out now at 60. It used to be 65. That’s how Gary Player got to 47. Lyle could still get in a future Open if he wins a Senior British Open, and he’s playing in one next week, at St. Andrews. He could get in through the 36-hole one day final qualifier, held in early July. Lyle, after his round on Friday, didn’t rule it out, if he’s living in Scotland, if the qualifier is nearby, if he’s feeling and playing well. Chances are, he’s played his last. He shot 75-76. Damn good golf. He still plays in the Masters as a former champ. His win at Augusta in 1988 came off a Sunday birdie on 18, in the last group. Check this: 1-iron into the fairway bunker, 7-iron out of it to 10 feet, made the putt to win by a shot over Calc. His father said, “If I go tomorrow, I’ll be a happy man.” He died in 1996.

Lyle talked for a few minutes about how he and his gang spurred each other on, “no different than Jordan Spieth, Justin Thomas, Rickie Fowler and the rest do today,” he said. It’s not every athlete who can acknowledge the excellence of the succeeding generation, but Sandy has always had the giving gene. He was never wound tight, even if his swing was decidedly inflexible.

He made about a 20-footer on the last on Friday for a birdie to end his day and likely his run. It was an odd, tricky left-to-right putt that was faster than it looked. Big Jack made a mini-bomb for his last moment in the Open, at St. Andrews. He was upset, because he missed the cut by two shots. When Lyle’s putt when in, he was elated. Different guy.

I asked Sandy what Seve would have said about his final putt.

“He would have said, `That’s the way to finish!'” And then he made that right-handed uppercut that was the hallmark of the Seve celebration, without the speed or the verve but with a sincere manner that was and is all his own.