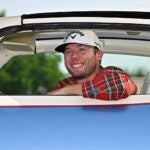 Sam Burns rode away from the Charles Schwab Challenge in style.

Welcome back to the Monday Finish, where we’re desperate to join the friend group of Sam Burns and Scottie Scheffler, just hoping some sort of golf talent would wear off. Let’s get to the news!

For a moment, Mito Pereira was the talk of the golfing world. He stood on the tee of the 72nd hole at the PGA Championship with a one-shot lead. Six strokes later he walked off that green one shot outside a playoff. The golfing world ached at his heartbreaking finish. He spoke to reporters, opening up on the moment. And then that same golfing world moved on — to the Justin Thomas-Will Zalatoris playoff, and then to the Charles Schwab Challenge, and soon to the Memorial and LIV Golf announcements and various other shiny bits coming across our news feeds.

But how would Pereira respond? That was far less clear. It’s impossible to leave something like that immediately behind — right? I was particularly curious in his next move because I spent PGA week trailing Pereira (for this story) and was amazed how, at the end, he had to clean out his locker and pack for a flight and get ready to head to the next stop. The circus goes on.

Pereira spoke to Golf Channel ahead of the Charles Schwab, but his most meaningful response would ultimately come on the course. He opened with a steady 70, went low on Friday with 66, played his way into the edge of contention with a Saturday 68 and hung tough on Sunday with a round of one-over 71 in demanding conditions. He made nine consecutive pars to finish, including a 22-footer to save his 4 on No. 18.

He didn’t speak to reporters after the round (I wasn’t there but I don’t think anyone requested him) but he didn’t need to. His T7 finish spoke for itself. And the way he did it — methodically, patiently, leaning on superior ball-striking — suggests this isn’t the last we’ll see him.

Pereira hit the ball well enough to win, in fact. He gained 4.15 strokes off the tee, No. 1 in the field. He was third in strokes gained from tee to green. If his putter had gotten hot (he was 51st in SG: Putting, losing 0.71 strokes) it’s easy to imagine he’d have been on the edge of another playoff. His consolation prize? More points, more money, more confidence. He’s up to No. 44 in the world, a lock for the U.S. Open and well on his way into the Tour’s upper echelon.

Sam Burns shot five-under 65 on a crispy, windy final day at the Charles Schwab Challenge, where he held on tight to the clubhouse lead of nine under par, where he waited for some 90 minutes as his competition dropped like flies. Eventually they’d all bogeyed and doubled and tripled their way out of contention save for Scottie Scheffler, who joined Burns in a playoff. That didn’t last long, however: Burns buried a 38-footer for the win on the very first extra hole.

Eun-Hee Ji played 111 holes over five days to claim the LPGA’s Bank of Hope Match Play in Las Vegas. With a 3 and 2 win over Ayaka Furue in the final, Ji punched her ticket to this week’s U.S. Women’s Open at Pine Needles — a particularly meaningful accomplishment since she won the 2009 event. At 36, Ji is the oldest South Korean winner in LPGA Tour history.

Victor Perez won the Dutch Open on the DP World Tour in particularly dramatic fashion when he holed a week’s worth of putts on his final six holes, first a 35-footer for birdie at 17 and then three bombs in the playoff against New Zealand’s Ryan Fox, who’d been in control of his destiny until he made double bogey at No. 18.

So close, and yet…

Five different pros reached double digits under par on Sunday at Colonial. None of them finished their round there. It was bizarre to see PGA Tour players moving backwards in such significant fashion for the second consecutive week, but battering winds and crispy greens meant for challenging ballstriking and even tougher putting as the afternoon went on. Birdies proved nearly impossible on the way in; the final five pairings combined for just three birdies on the last six holes of the day.

Sam Burns was at 10 under until he bogeyed No. 12 — but steadied the ship with six pars to finish before his playoff heroics.

Brendon Todd got to 11 under with birdies at No. 1 and No. 2 on Sunday but faded with bogeys at 11 and 12. He finished solo third, one shot outside the playoff.

Davis Riley reached 11 under, too, holding the lead by himself with just six holes left. But he missed a three-footer for par at No. 13 and blew his tee shot out of bounds on 14 en route to a T4 finish at seven under par.

Harold Varner III had the most dramatic drop of all. He was 10 under and T1 on the 12th green, putting for par. But he missed that putt and then missed two consecutive three-footers before tapping in for triple bogey. He found the water and made double bogey on the next hole, too, and made it the dreaded Boeing (7-5-7) with an OB ball at No. 14. You can see the rest for yourself but Varner’s back nine turned into a house of horrors, shooting 10-over 45 to finish T27.

And then there was Scottie Scheffler, who began the day at 11 under par and seemed destined to outlast the competition and win for the fifth time in 2022. Instead he played an interesting birdie-free round of two-over 72, notching bogeys at No. 6 and No. 12 and pars everywhere else.

The U.S. Presidents Cup team is going to look different this year.

There has been a familiar core around which recent U.S. teams have been built. Thus far, this year’s team is promising to introduce some fresh faces. Burns was already essentially a lock before Sunday’s win. But other names including Max Homa, Tom Hoge, Will Zalatoris and Talor Gooch are threatening to make their first teams, too. The team will be comprised of the top six qualifiers and six captain’s picks.

There are still two majors and plenty of big-time events left to shake up the standings, but it’s notable that as of now familiar team members like Tony Finau (14th) Patrick Reed (17th), Dustin Johnson (18th), Bryson DeChambeau (25th) and Brooks Koepka (27th) are on the outside looking in.

Patrick Reed working his way out of a familiar trap.

It seems as though every time a top pro finds himself slumping he gets caught in a familiar trap: Overthinking and overanalyzing. Enter Patrick Reed, who threw down a T7 at Colonial for his first top 25 since the 35-player Tournament of Champions.

Playing positions in the swing. This is another way of Reed saying that he was playing golf swing instead of just playing golf.

It’s tough to parse out cause and effect in these situations, because when someone isn’t swinging the club well it’s not as though you can just wave a wand, tell them to stop thinking about anything and all problems will go away. But it’s clear that the diagnostic process can have some nasty side effects. Justin Thomas talked about how frustrated he was on the driving range the week of his PGA win. He also credited his victory to letting that frustration go, trusting his abilities and focusing on hitting the shots in front of him. Reed’s words suggest something similar.

“You can be as technical as you want on the driving range and in practice, but once you step on the golf course you’ve got to be a player. You’re not out there trying to figure out a golf swing,” he said. Still, the process appears to be easier said than done. We’ll see if Reed’s progress proves linear.

1. Comings and goings at the U.S. Women’s Open

Nelly Korda returns to competition at Pine Needles for the first time since February after undergoing surgery to remove a blood clot in her arm. Michelle Wie West, meanwhile, has announced she’s stepping away from the LPGA Tour after this week’s event.

The PGA Tour is putting on one of its flagship events at Muirfield Village this weekend with a star-studded field that includes Jon Rahm, Rory McIlroy and Jordan Spieth.

We still haven’t seen names for the first LIV event outside of London, scheduled for June 9-11. That means we’re likely to get some sort of field list announcement early this week — perhaps as early as Tuesday — which will finally make this all start to feel a bit more real.