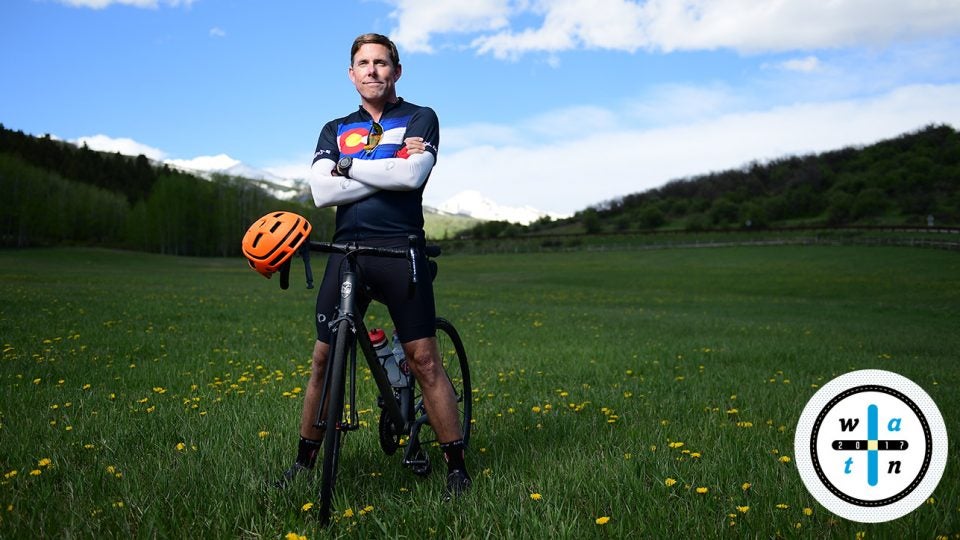 When you think of Aspen, you think of movie stars walking down the sidewalk with their little dogs on diamond leashes,” Justin Leonard said recently, artfully stereotyping the Colorado ski resort where he now makes his home. “But that’s not the people who live here year-round. We just share a love of the outdoors and a common interest in raising our families here.”

Leonard, a 45-year-old former golf star with PGA Tour career earnings of roughly $34 million, was walking his two white labs, Maggie and Blizzy, through Aspen’s woodsy West End. Big dogs, it goes without saying, roaming off-leash and diamond-free in an upscale neighborhood lacking curbs or sidewalks. Completing the social profile, he added, “I see more people wearing cowboy hats here than I ever did in Dallas.”

Justifying his Aspen residency and Twitter handle (@jlmountainman) has become routine for Leonard. Two years ago he confounded his Texas neighbors and relatives—not to mention anyone who plays pasture pool for a living—by selling his big house in Dallas and moving his wife and four kids to an elevation (7,908 feet) inhospitable to the year-round practice of golf. Once there, the 1997 British Open champ and ’99 Ryder Cup hero grew a shaggy beard. No big deal, but considering that flatland Leonard had been the kind of guy who sent his golf towels to the dry cleaners, the move was suggestive of a mid-life crisis.

Leonard concedes the point—”I hadn’t been playing as well for a couple of years, and I felt a little bit of stress”—but he couches his Rocky Mountain makeover as a mid-life opportunity. “I’m more relaxed here,” he said on a morning stroll through the grounds of the world-renowned Aspen Institute. “I think if we had stayed in Dallas, it would have been harder to make the transition.”

The transition Leonard had in mind was the one that most athletes face as their skills erode, with this difference: Golfers get a mulligan. The PGA Tour Champions, the circuit for touring pros age 50 and over, affords multimillion dollar opportunities for golf’s sunshine boys. Consequently, most of them play right through their 40s, expecting to be competitive again as they go gray. By 2014, however, Leonard had begun to question the “play till you drop” paradigm. He hadn’t won a tournament since ’08 and hadn’t topped a million dollars for a season since ’10.

“I could tell Justin wasn’t enjoying it as much,” says his wife, Amanda, who worked for CNN in Atlanta before moving to Dallas to wrangle streaming rights for billionaire Mark Cuban’s broadcast.com startup. “As the kids got older, we couldn’t join him on the road. Being alone and not playing well was wearing on him.”

Weighing his career options, Leonard looked for something that would keep him in the game without having to actually play. “Every professional golfer wants to design golf courses, but that market is nonexistent these days,” he says, alluding to the post-2008 golf recession. “But broadcasting was an exciting possibility.” Tommy Roy, NBC’s executive golf producer, auditioned Leonard at the 2015 Hero World Challenge and then gave him five on-air assignments for ’16. “I was nervous at first and trying too hard to be a ‘golf announcer,'” Leonard recalls, “but I learned that I just need to be myself, talking about a game that I’ve played all my life.” Impressed with his progress, Golf Channel/NBC signed Leonard to a two-year deal that has him working a dozen tournaments this year.

Flirting with television was one thing. Leaving Texas was another. Leonard learned the game on the fairways of Dallas’s Royal Oaks Country Club. He was a two-time All-America at Texas, achieving Longhorn-legend status by winning the U.S. Amateur in 1992 and the NCAA individual championship and the Haskins Award for top collegiate golfer in ’94. He turned pro that year and won enough prize money as a sponsor’s invitee to earn his PGA Tour card without having to go through Q school.

Never an intimidating golfer, Leonard nonetheless made a fortune through disciplined practice, shrewd course management and competitive grit. He won the 1996 Buick Open by five, the ’97 British Open at Royal Troon by three and the ’98 Players Championship by two. Most famously, he drained a 45-foot putt on the 17th hole at The Country Club, in Brookline, Mass., to seal the U.S. team’s comeback victory at the ’99 Ryder Cup—memorialized on SI’s cover as “The Putt Heard ‘Round the World.” “He’s a meticulous fellow who makes lists of lists, arranges his sock drawer by colors, sets at least two alarm clocks and looks like he visits Floyd the barber once a week,” wrote Scott Ostler in the San Francisco Chronicle in ’97.

Leonard was not a guy, in other words, to let go of relationships and routines developed over a lifetime. His parents lived just up the street in Dallas. His swing coach, Randy Smith, taught at Royal Oaks. As for precedents, Ben Hogan and Byron Nelson never left their Dallas–Fort Worth orbit; Harvey Penick, the legendary Austin Country Club pro, taught into his 90s, and his prize pupils, Ben Crenshaw and Tom Kite, live there still. Texas golfers stay put.

Nevertheless, the Leonards had a hankering to shake up their lives. The eureka moment came when Justin asked Amanda, “What if we take golf out of it?” And just like that, the possibilities multiplied. “We could kind of move anywhere,” he says, unconstrained by the need for year-round practice facilities, favorable tax rates and a first-class airport.

“We told the kids we were thinking about it in January of ’15,” Leonard says. Fairly quickly, they settled on two finalists: Florida’s Palm Beach County, where Amanda had grown up, and the Colorado Rockies, the family’s favorite vacation destination. Then came the omens that influenced their decision. “I was in the Phoenix airport, looking at houses on my iPad,” Justin says. “I called Amanda, and she was doing the same thing. And as we were talking, this guy stands up across the terminal, and his red T-shirt has the word ASPEN on it.” Amanda, meanwhile, went to a dinner in Dallas, and, despite having told no one about their plans, a friend said, “I think you’re going to be living in Colorado soon.” Says Justin, “It got to the point where I said, ‘I think we’re supposed to go to Aspen.'”

And so, to Aspen they went. Their new house, surrounded by aspens and pines on a corner near the Roaring Forks River, is a hub of incessant activity, its two-car garage crammed with skis, snowboards, mountain bikes, hiking boots, lacrosse sticks, soccer balls and tennis rackets. The Leonard kids, Reese, 13; Avery, 12; Luke, 10; and Skylar, 7, are clearly into sports, but mom and dad put them to shame with a daily regimen of trail biking, lap swimming, running, weight training and yoga. Amanda, who has run five marathons, including New York City, is training for October’s half-distance Ironman 70.3 Arizona triathlon in Tempe. “I’ve gotten roped into the training,” says Justin, who plans to join his wife for a late-June duathlon (run, bike, run) and an August triathlon (swim, mountain bike, trail run). “It’s been a blast, and I’m in the best shape I’ve ever been in.”

His golf game, however, is gathering rust. Leonard played 13 tournaments in 2016, his best finish being a tie for 16th at the Northern Trust Open. This year, he’s played just once, making a sentimental journey to San Antonio for the Valero Texas Open. To prepare, he practiced at Aspen’s Maroon Creek Club, where a Tour pro stands out like a sore thumb among the billionaire couples sweating on treadmills and elliptical trainers. “It’s funny,” he says, “but my mind started going to where it used to go, which was, O.K., what do I need to do on that golf course? How do I hit such and such tee shot?” Standing on the driving range, he had laughed out loud. “It was like, ‘What am I thinking? I’m just going to try to find the clubface and have some fun.'”

Leonard finished T58 in San Antonio—and had fun—but he doesn’t yearn for his old life. “It was great to go back,” he says, “but I’m learning that my game doesn’t translate very well any more. It’s shocking how far most of these guys hit the ball now.” He recognizes, as well, that the mountains afford him a serenity that he never enjoyed on Tour, where he was a tight-jawed, dour performer. “People from my playing days think I have no sense of humor,” he says. “And I was pretty serious.”

Amanda is no less grateful for the respite. “The Tour is a pressure cooker,” she said in May, watching her still-fastidious husband hand-wash the dinner dishes before putting them in the dishwasher. “It’s stressful when you’re not playing well, and it’s even more stressful when you are playing well, because everybody’s eyes are on you.” Even on the weeks that Justin was home, she recalled, “he never really left the game. Only half of him was present to what we were doing. But here, in Aspen, he’s totally present. He’s free to explore other hobbies and share all the little moments with his children. They love having their dad around, present and engaged.” She summed up: “When your soul and your heart are alive, it’s a beautiful thing.”

The only thing @jlmountainman seems to have lost since moving is the beard, which succumbed to the razor last fall. (“I needed to look the part for TV,” Justin explains, stroking his golf-analyst cheeks.) From time to time, he reflects upon his playing career, as befits a champion, but he doesn’t romanticize it. “It was always work,” he said in the shadow of Aspen Mountain, putting his dogs on their leashes for the walk home. “It was a job.”

Leonard’s smile said he’d found something better: A life. And only now is he reaching his peak.