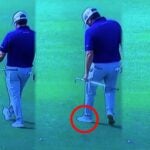 Ryan Palmer after hitting a heavy chip in the third round of the Sentry Tournament of Champions.

Ryan Palmer found himself tied for the lead as he walked off the Plantation Course at Kapalua Bay on Saturday at the Sentry Tournament of Champions. A few minutes later, he found himself answering questions about a rules situation he was unaware could even be an issue.

Palmer, who closed out his third round at 21-under in Maui, was heading into the scoring tent to certify a Saturday 64 when he was approached by PGA Tour rules official John Mutch. Mutch was concerned about a situation that occurred on the par-5 9th hole, coincidentally the only non-birdie par-5 for Palmer on Saturday thanks to a chunked chip shot.

“When I walked in there, I saw Mutch with a book out and I was like, ‘What’s this about?’ And I started going through my mind on the day,” Palmer said after his round. “Then when he said, ‘We have a situation on 9,’ and I immediately was like, let’s see, I hit a good 3-wood, fluffed a chip, told [caddie James Edmondson] I hit the wrong club, and then went to where I was ended up chipping again, I still had no idea.”

As Mutch explained, a Golf Channel feed picked up video of Palmer’s chunked chip, which appeared to show the 44-year-old kick away a divot as his ball rolled back toward him.

If Palmer intended to clear out the divot from the path of his ball, it would prove a violation of Rule 11.3 of the Rules of Golf, which states, “while a ball is in motion, you must not deliberately alter physical conditions or lift or move a loose impediment or movable obstruction to affect where the ball might come to rest.”

For Palmer, the discussion surrounded trying to assess intent. If he moved the divot away with the intent of keeping it out of the ball’s path, it would be a violation of the rule and a two-stroke general penalty. If there was no intent to improve his lie, Palmer was in the clear.

“There was no intention of me trying to help my ball because there was no way my ball was even close to where I was at,” he said. “I was just discussing with James I hit the wrong wedge on the chip shot, in disgust, and then when I got there, I just kind of did the old kick the divot, p—-d off motion and the ball stopped five feet away from me.”

Fortunately for Palmer, footage of the incident seemed to defend his argument. His ball veered away from him and to the left as it rolled down the false front, a safe distance from the location of the divot. After a brief discussion, Palmer avoided a penalty (if not some confusion).

“After that it was, based on the Rules of Golf, there was no intention of me trying to abuse the rule,” he said. “There was no way, because that ball wasn’t even going to be close to where I was at…Now, if I would have ran three feet further to the right and kicked a divot where the ball ended up, okay, now, I see the issue. But from where I watched and where I was standing, there was no way of me improving my lie whatsoever.”

Believe it or not, we are becoming smarter golf fans

'There's an art to it': Butch Harmon offers club-throwing tips in hysterical video