Course Rater Confidential: What makes Royal Portrush so good? And what are Northern Ireland’s other must-plays?

GOLF’s Top 100 course panelists are among the most respected and well-traveled course evaluators in the game. They’re also keen to share their opinions. In this GOLF.com series, we grant them anonymity and turn to them for their unvarnished views on all questions course-related. The goal is not only to entertain you but also to give you a better understanding of how GOLF’s panelists assess courses. In this edition, with a nod to the Open Championship, we’ve asked our experts to peel back the layers on Royal Portrush, and also to identify the other must-plays on a Northern Ireland golf trip.

For our readers who may never have visited, or possibly even heard of, Royal Portrush, what makes the course of historical and architectural interest? Is there anything that sets it vividly apart from other courses in the U.K. and Ireland?

Panelist 1: A great grandeur to the sand hills. They are like the Himalayas to the Alps when it comes to size. The tumbling terrain is perhaps only matched by Ballybunion for heaving drama and scale.

Panelist 2: Great dunesland, for sure, and a course that will most likely test every club in your bag. Probably Harry Colt’s pure links “masterpiece.” It is actually my own personal favorite links course in the world.

Panelist 3: Royal Portrush is rugged and heaving, and yet subtly refined. It doesn’t rely on trickery or even quirk to impress any curious golfer.

Panelist 4: Since its foundation in 1888, Royal Portrush has undergone a transformation in more ways than one. It was originally a nine-hole course, known as the County Club. The following year it was extended to 18 holes. The biggest transformation came along when Harry Colt redesigned the course in 1932. The Dunluce links is named after the ruined Dunluce castle that overlooks the course. It was the venue for the first professional golf tournament in Ireland, won by Sandy Herd in 1895. The Open Championship has been held outside of Scotland and England only once; that occasion was at Royal Portrush in 1951 when Max Faulkner triumphed. The significance of the 2019 Open Championship just further separates the club’s status among all other Irish clubs. The place is special for all the reasons above — just special. Plus, you not only have to use every club you also have to think about every shot.

Panelist 5: Links at its best and pure golf. Everything is right in front of you with no gimmickry. It’s a lot of golf course so one had better be on their game. What sets it apart from most other great links courses in the U.K. and Ireland is that it is truly set in the “wild.” The golfer feels more remote and at one with nature here than on any other course on the Open Rota. 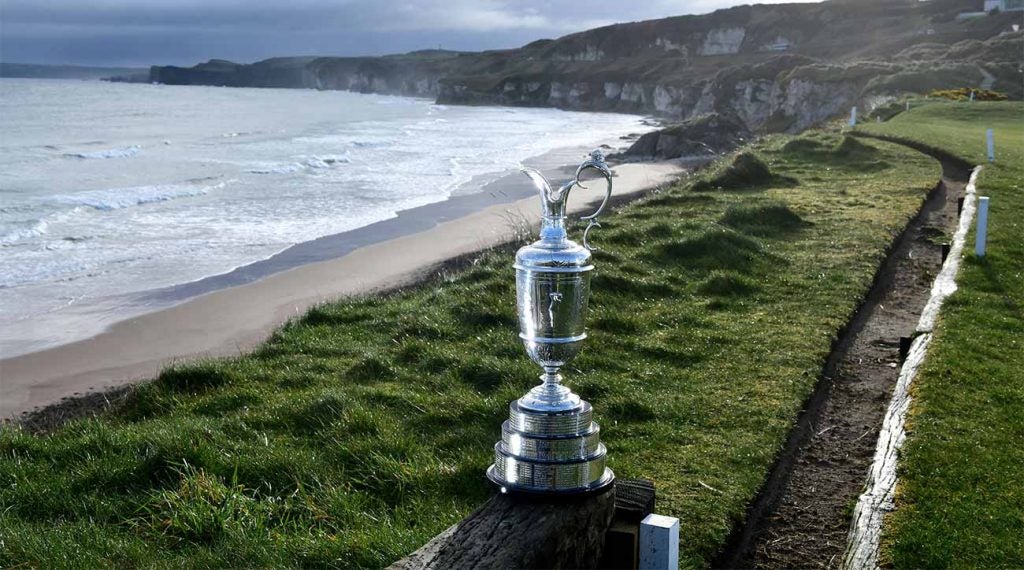 What are Royal Portrush’s greatest attributes?

Panelist 1: A great driving course where the fairway must be found in order to have a remote chance at scoring. Considering they have narrowed the course in recent years (from accounts), it may now be a tad penal. The routing also shows off the property. Greens have some of the toughest-to-read contours of any links making them a challenge and fun to play.

Panelist 2: I agree that it is imperative to drive the ball on the fairways in order to score well (O.B. on the left and the right of the 1st hole will get your pulse racing from the get-go!). For the most part, the greens are large and undulating, so important to get both speed and lines correct to avoid taking too many putts. There’s also a great variety of par-3 holes from the shortish 3rd hole to the longer 6th and 13th holes and finally the famous jaw-dropping “Calamity Corner” 16th hole at 236 yards from the tips.

Panelist 3: There is no let up from tee to green and once upon the dance floor, it demands brains and finesse to find the hole. The routing’s orientation to any wind is exceptional and undeniably H. Colt’s masterpiece.

Panelist 4: Royal Portrush is certainly beautiful and it has one of the most dramatic layouts in this part of the world. The course is a classic seaside links, blessed with brilliant ocean views. The fairways nestle in natural valleys between towering sand dunes. The varied-size greens blend perfectly into the landscape, one of Colt’s greatest assets. The greens are generally protected by natural grassy hummocks rather than sand bunkers, further adding to the understatement.

Panelist 5: Royal Portrush requires you to hit it straight or hit it often. The par-3s are especially strong and varied. They could be a big factor in determining the Champion Golfer of the Year. 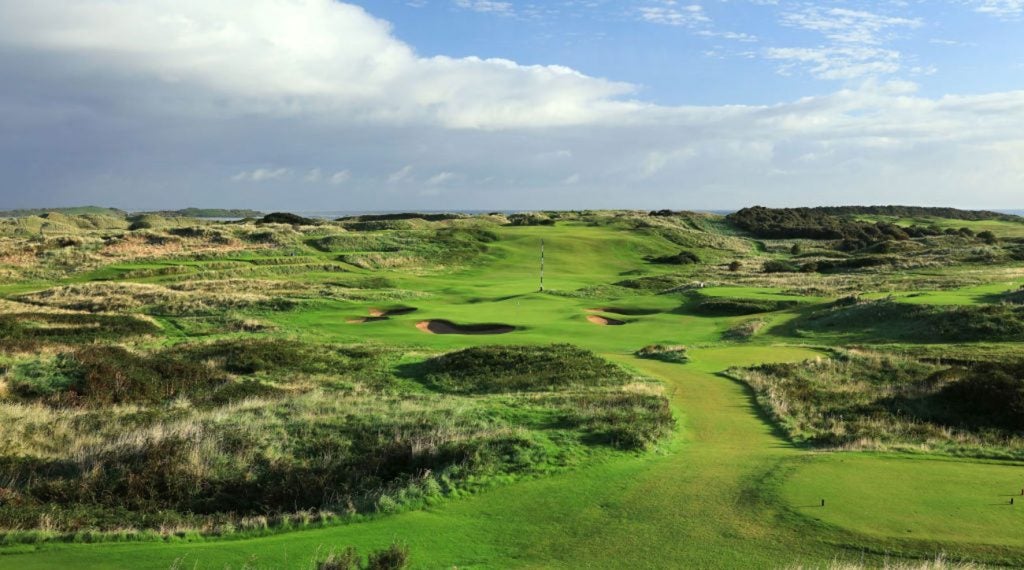 Panelist 1: A few prosaic holes here and there.

Panelist 2: Following the introduction of the new 7th and 8th holes, I believe there are no real weaknesses at Royal Portrush, as the former 17th and 18th holes have been eliminated and therefore no ending over flat terrain.

Panelist 3: Yes, not many weaknesses now that the new 7th and 8th holes have been introduced. Dense rough and fescue not far from fairways do somewhat limit recovery shot creativity. Some might find it exceedingly narrow in certain spots.

Panelist 4: A course this superb doesn’t have any glaring weaknesses. The old anticlimactic 17th and 18th holes are gone and have been bulldozed flat, which essentially eliminated the courses biggest weaknesses. The old 16th green is now the last green, which is a bit of a walk from the clubhouse and some may question its location given that you must cross over the 1st hole to get back to the clubhouse, but it’s still a fabulous finishing hole.

Panelist 5: Tough to think of any weaknesses on a course this great. Perhaps too difficult for the average player in windy conditions.

In preparation for the Open, Royal Portrush underwent renovations. Assuming that you’ve seen or played the course since those changes, what do you make of them? For the better? Worse? Why?

[Ed. note: Only one panelist has seen the renovations.]

Panelist 4: The 7th and 8th holes are mighty additions and have been perfectly integrated into the routing. The new par-5 7th plays 600-plus yards uphill and pays tribute to the Big Nelly bunker which existed on the old 17th hole. The new par-4 8th hole is a dog-leg left playing across a ridge and into a deep green that directs you back toward the White Cliffs in the horizon. The two new holes make the front nine much longer, and it is a huge test of golf. The club also finalized a concealed tunnel walkway located near the 7th/9th/11th tee boxes to allow players to move seamlessly at that busy junction on the course.

After the two headliners — Portrush and Royal County Down — which two courses would fall next on your must-play in the North of Ireland across the province of Ulster?

Panelist 1: Only played Portstewart which is not far from Portrush. Great tumbling land and holes over the front nine. Definitely a must play.

Panelist 2: Portstewart for sure is the third-best course in Northern Ireland, with the first nine there as good a nine holes of pure “links” golf that you could ever find anywhere. My next favorite course in NI would be the Nick Faldo-designed Lough Erne, as it an excellent design with a great variety of holes, many of which take in spectacular views over Lough Erne. However, if you were traveling over from the U.S., I might not recommend it as a must-play as it is not a “links” course and would therefore consider Ardglass or Castlerock instead.

Panelist 3: Portstewart and Ardglass. The former’s front nine brilliance is second only to Royal County Down and the latter’s quirk, setting and routing is hearty recipe for pure linksland fun.

Panelist 4: Rosapenna (Sandy Hills). It’s a non-stop thrilling experience playing through the dunes, with no shortage of difficulty added by blind tee shots and approach shots. It’s a championship test like no other in the northwest, and in firm and fast conditions, this Donegal jewel will knock your socks off. The jaw-dropping surrounding scenery will take your breath away as will the routing that designer Pat Ruddy discovered in this idyllic setting. The quality continues the entire way through the back nine and I walked off the course wondering how on earth this course doesn’t get more awards.

Panelist 5: Also, Portstewart. Forget Machrihanish (I say that tongue in cheek), this golf course has the most dramatic and panoramic first tee shot in golf. My eyes were wide open staring around me from that elevated platform. The front nine is carved out of the largest dunes I’ve seen, and it feels like a Hollywood movie set. Each hole is a spectacular experience throughout an amphitheater of sand. While the back nine has a different personality, a trip to Portstewart is a terrific experience.