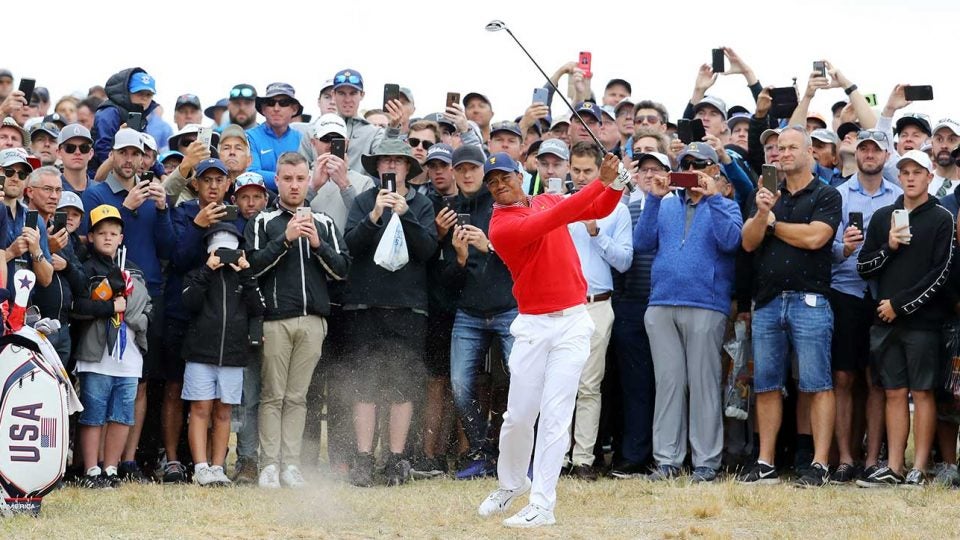 Tiger Woods hits an approach shot during the first session of the Presidents Cup on Thursday.
Getty Images

Every great artist needs a setting that inspires and captivates and allows their genius to be expressed. Monet had Giverny. Ansel Adams had Yosemite. And now Tiger Woods has Royal Melbourne, a vast canvas on which the American playing-captain produced a masterpiece during the first day at this Presidents Cup.

It took all of two swings for Woods to send a charge through the Sand Belt. Having sent himself out in the first match — alongside Justin Thomas versus nervous rookie Joaquin Niemann and homegrown hero Marc Leishman — Woods mashed a 339-yard drive off the first tee to the right edge of the fairway, leaving himself the perfect angle to a back-left pin on a short, dangerous par-4. From 57 yards out he clipped a little cut wedge into the sloping green, feeding his ball off a ridge and then letting it trickle to within three feet for a birdie that won the hole. It was a shot that took touch, imagination, nerve and an intuitive feel for how to play a course that is anything but the paint-by-the-numbers Woods sees every week on the PGA Tour.

News
Patrick Reed endured a villain’s reception at the Presidents Cup, but he’s given this event the juice it needed

The highlights just kept coming. On the 2nd hole, a twisty par-5, Woods played a 40-yard slice with a fairway wood to just in front of the green, setting up another birdie to win the hole. Just like that the Yanks were 2 up and Woods had made it quite clear that he didn’t fly around the world to be a ceremonial golfer. He had come to claim souls. On the par-3 5th hole he chipped in for birdie. Three-up. On the 11th hole Woods hit an otherworldly long bunker shot to win another hole. At the par-3 14th he carved a high cut that bounced and ran to within eight feet for another winning bird that restored the Americans’ lead to 3 up. The match ended on the next hole, a par-5, where Tiger produced two mighty clouts to set up his sixth birdie of the round, two more than Niemann and Leishman combined to make. The final tally was 4 and 3 but it never felt that close, even with Thomas largely a non-factor.

What makes Tiger Tiger is his incredible versatility. He is a master tactician, a plodding grinder and freewheeling artist, often accessing all the different skill sets within the same round. For Woods, Royal Melbourne is as stimulating as the Old Course or Augusta National, the two courses that have done more to burnish his legend than any others. Not coincidentally, Dr. Alister MacKenzie designed the latter based on the former. Woods won three of his first six Masters as a pro, back when the course was still a wide-open canvas. Then the Hootie-fication began, with new forests crowding the fairways, new tee boxes destroying old angles and unwelcome rough interrupting the run of play. MacKenzie’s Royal Melbourne is how Augusta National used to play, which is why it’s so fun to watch the reborn Woods access the genius that defined his youthful domination.

Of course, Tiger can’t win this Presidents Cup all on his own, as the 4-1 U.S. deficit attests. But it hardly matters. Something bigger is happening here. This is Dylan at Newport, Baryshnikov at the Bolshoi, Brando doing Streetcar on Broadway. A transcendent performer has found his ultimate stage. Sit back and enjoy the show.