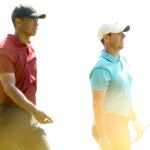 NEW PROVIDENCE, Bahamas — If you, dear golf reader, felt curious about Tiger Woods’ first public reappearance, take solace in knowing that other PGA Tour pros were keyed in too.

Dressed in a red shirt with a Nike swoosh (a sartorial coincidence, though an unintentional nod to the tournament host) Rory McIlroy addressed reporters after his Wednesday pro-am at the Hero World Challenge. The first question he faced was about his boyhood idol-turned-colleague, Woods, who spoke to reporters for the first time in nine months on Monday.

One takeaway that seemed to populate Tuesday’s headlines was that Woods was effectively done playing a PGA Tour schedule. But McIlroy didn’t think that particular bit was new and noteworthy.

“I mean, I don’t feel like he’s played full time on the PGA Tour since 2013 really, so I mean it shouldn’t be a surprise to anyone to hear that,” McIlroy said.

For his part, McIlroy doesn’t think Woods owes the golf world any more than he wants to give.

“He’s been through injuries and he’s, you know, he’s been through the wars. He’s put his body through a lot,” he said. “Yeah, I mean, I think if I were him at this point, I’d have no ambition to play a full-time schedule. You play the events you want to play, whatever gets your juices flowing. For him, that’s the majors and maybe a couple other events a year and that’s it. I think he said yesterday that’s what he feels like he can get himself ready for. I mean, it’s smart, it’s smart to do that.”

McIlroy was well-informed on the subject. Here’s what Woods had to say on his future playing prospects:

“To ramp up for a few events a year as I alluded to yesterday as [Ben] Hogan did, he did a pretty good job of it, and there’s no reason that I can’t do that and feel ready,” he said. “I may not be tournament-sharp in the sense I haven’t played tournaments, but I think if you practice correctly and you do it correctly, that I’ve come off surgeries before, I’ve come off long layoffs and I’ve won or come close to winning before. So I know the recipe for it, I’ve just got to get to a point where I feel comfortable enough where I can do that again.”

McIlroy and Woods live near each other in Jupiter, Fla. When Woods returned home after his crash, McIlroy went to see him ahead of the Masters.

“I spent a couple hours with him, which was nice.  It was good to see him,” McIlroy said at the time. He was encouraged by Woods’ condition, said he was in “decent spirits,” which was a good sight to see given the severity of the accident. “When you hear of these things and you look at the car and you see the crash, it’s like, you think he’s going to be in a hospital bed for six months,” McIlroy said. “But he was actually doing better than that.”

The visit was also notable because McIlroy, in his Tour of Woods’ domain, came away with an epic reminder of his host’s career success.

“In his family room he’s got his trophy cabinet and it’s his 15 major trophies. I said, ‘That’s really cool. Where are all the others?’ McIlroy said at the time.

The trophies in question were Woods’ 67 other non-major PGA Tour wins, plus dozens more victories around the globe. The moment understandably stuck with McIlroy.

“I was driving home, and I was thinking [those major trophies] are all he cared about. All he cared about. So how easy must that have felt for him to win all the others? That was just always in my mind. He talked about how these are the four weeks that matter. So the weeks that didn’t matter, you know, he racked them up at a pretty fast clip.

“But I’m just thinking to myself, how easy must that have felt for him if all he cared about were four weeks a year.  The other stuff must have been like practice. So that’s a cool perspective to have, right? Yeah — that’s all I could think about on the way home.”

He added something else, too: Just how much he thought Woods would like to be there for the 2022 Masters.

“Broken bones heal, and he’s just got to take it step by step,” McIlroy said. “But I know he’d love to be here, and I’m sure he’s going to put everything he has into trying to be ready to play here next year.”

Time will tell if McIlroy is proven prophetic; there’s a world in which Woods targets Augusta National as a place to stage his grand return. But he made it clear that although he’s working toward that very same goal, he has no expectations on timeline.

“I’ll put it to you this way: As far as playing at the Tour level, I don’t know when that’s going to happen,” he said.

McIlroy spoke for Woods’ many optimistic fans around the globe.

“It will just be nice to see him back on the golf course again whenever that is.”