Rory McIlroy is floored with Tiger Woods’ completing his comeback — especially after knowing just how far from competition he was two years ago. McIlroy recalled a 2017 lunch with Woods in his pre-tournament press conference on Wednesday at the Wells Fargo Championship.

“Yeah, I mean, I had lunch with him in Jupiter just over two years ago. It was March 2017, coming off the back of another surgery or whatever. All he was thinking about was quality of life, watching his kids grow up, being able to play soccer in the backyard. So his mind wasn’t even on golf, which sort of told me he’s sort of thinking about, ‘this could be it.'”

McIlroy clarified that this didn’t mean a low moment for Woods personally — merely that he wasn’t sure of his golf future. “Just maybe not playing competitive golf again,” he said. “So to think in two years of what’s happened, it’s incredible…I don’t think people quite appreciate what has went into it. But it just shows he’s gritty, he’s determined. It’s always been one of his best qualities and it was awesome to see.”

He added that Woods’ 2019 Masters win was good news for everyone involved with the game. 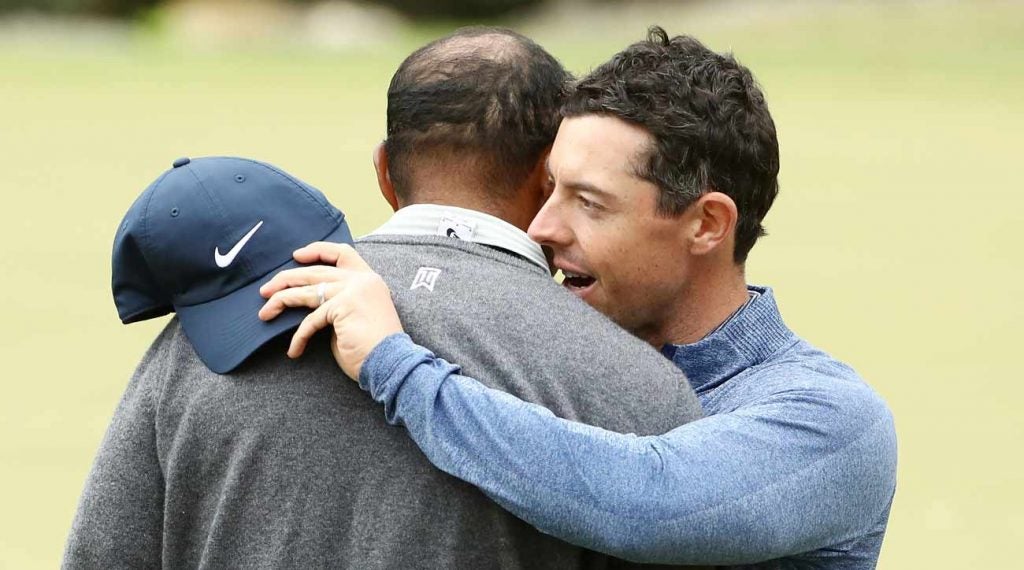 Rory McIlroy had lunch with Tiger Woods in Jupiter in 2017 and came away unsure of the legend's golf future.
Getty Images

McIlroy also entertained the possibility that Woods’ pursuit of Nicklaus’ 18 majors was back in play.

“I mean, I would certainly think so. It rejuvenates, reenergizes that narrative,” he said. “Like, Tiger could be competitive at Augusta for the next 10 years if his body holds up. So, I mean, yeah, yeah.”

He explained why Woods enjoys it so much at Augusta National.

“The Masters…only certain people are allowed inside the ropes. He doesn’t have to deal with what he has to deal with week in and week out. It’s almost like a little sanctuary for him, right? I think that obviously played into his hands there.”

McIlroy is the favorite at the Wells Fargo Championship at Quail Hollow in Charlotte, N.C. this week. He tees off alongside Sergio Garcia and Tony Finau at 12:50 p.m. on Thursday.