When Rory McIlroy talks, we all listen. He tends to shine a light on Tour culture much more than other elite pros. This week, with a newly-formatted Tour Championship, his opinions on the setup were sure to be insightful.

In addition to that — spoiler: he’s not sold on the format — we were given a peek behind the curtain of life with massive finances. In 2007, McIlroy was loving his new, professional life.

“I played the British Masters my first tournament as a pro; I finished 42nd and I won like 17,000 pounds,” McIlroy said. “Then then next week I went to the Dunhill and finished 3rd and won 230,000 pounds.

“I’m 18 at the time. Didn’t really know about taxes … Then I played in Madrid the next week, finished 4th, won another 50 grand or whatever. I got home and went to get money out of the ATM. 18 years old, I had a debit card. Put it in the ATM and it’s like, ‘Would you like to check your balance.’ I checked my balance and was like, ‘Oh! Wow.’ I went straight to the jewelry store and bought myself a watch.”

Fast forward just eight years, McIlroy had become an international star after winning four majors, and was selected for press conferences at every tournament he’d play. Money, it was clear, didn’t have the same effect on him anymore, and when he sincerely acknowledged that, he was vilified. Back at the Tour Championship in 2015, when asked how he’d spend what was then a $10 million top prize, McIlroy said, “No. Luckily, that amount of money doesn’t sort of mean much to me anymore,” before admitting he’d probably put it in the bank. 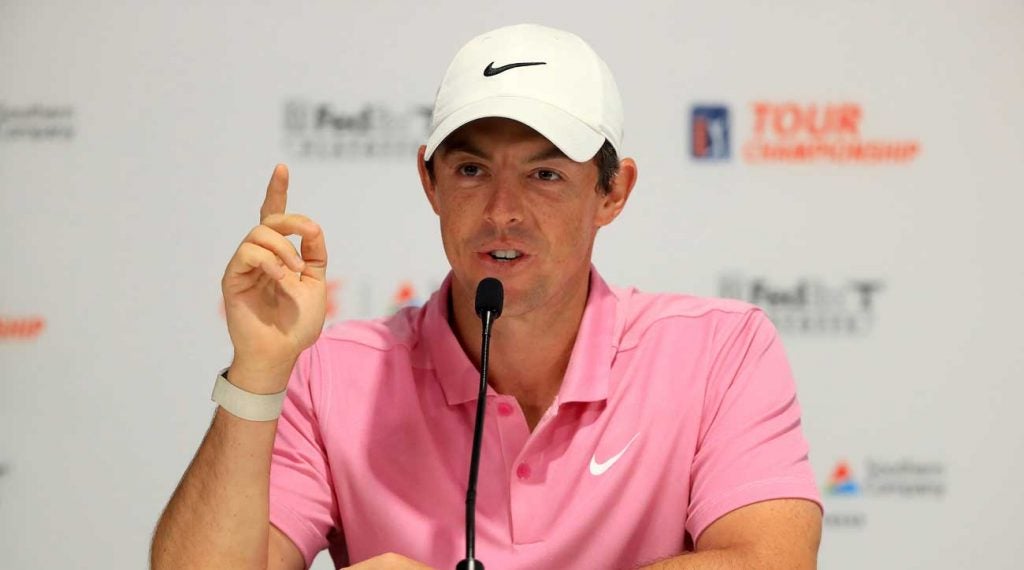 Which brings us to Wednesday at the Tour Championship, where money is forever one of the leading topics, and even more so this year with a $15 million top prize. Where most pros shy away from discussions on money, McIlroy continues answering candidly.

“At this point in my career, [money is] not my most motivating factor or driving factor,” McIlroy said. “If I were to end my career and sacrifice maybe some commercial opportunities to say that I had won a few more tournaments, I’d probably make that sacrifice because that’d give me more satisfaction than money that’s in the bank or in an investment portfolio that I’m never going to see or never going to use.”

That bank or investment portfolio is already hefty. McIlroy has made more than $48 million dollars in his career on the PGA Tour alone. Though there is overlap in events, McIlroy has made 36 million pounds on the European Tour. His sponsorship contract with Nike is reportedly worth $300 million over 10 years and his contract with TaylorMade worth a reported $100 million more.

McIlroy detailed how he’s given some money to charities special to him, but his future outlook on cash earnings revolves around more than himself. He once gave his then-caddie J.P. Fitzgerald a hefty bonus after he won the FedEx Cup in 2016. The gift of giving gives McIlroy plenty of pleasure himself. Gaining in order to give, share, etc. is where McIlroy’s monetary focus tends to exist at the moment.

”I was listening to music on the way here. It was a J. Cole song called ‘Middle Child,’” McIlroy said. “It talks in the lyrics about him having money, but what does it mean if you can’t — it talks about flying first class but what does it mean if you can’t have the people you want with you flying the same way…That’s one of the luxuries of money is you can help others you want or you can share it around. It doesn’t all have to be about you. That’s the cool thing.”

You can listen to the J. Cole song by clicking here, but read the lyrics McIlroy is citing below.

I roll with some fiends
I love ’em to death
I got a few mil’
But not all of them rich
What good is the bread if my n—–s is broke?
What good is first class if my n—–s can’t sit?
That’s my next mission
That’s why I can’t quit
Just like LeBron
Get my n—–s more chips

Here in 2019, we have perhaps the most introspective McIlroy we’ve ever seen. He talks about his money. He talks about meditating, the books he’s reading, successes and failure. We all continue to understand this game (and his game) much better as a result.