The Open 2019: Is the opening-hole O.B. that wrecked Rory’s round unfair?

PORTRUSH, Northern Ireland — Rory McIlroy’s nightmare start at Royal Portrush began with a tee shot that sailed out of bounds, which flanks both sides of the first hole — and he isn’t the only player who has started his Open Championship with a penalty thus far.

Is the inclusion of internal out of bounds on the par-4 first hole unfair? Our resident staffers Jessica Marksbury, Dylan Dethier, Luke Kerr-Dineen and Alan Shipnuck debate.

Rory wishes he had this one back. pic.twitter.com/zjzaBpIm1f

Jessica Marksbury: While I really feel for Rory, and I generally don’t like internal O.B. as a rule, in this instance I think it’s fine. The R&A explained yesterday that the O.B. operates more as a symbolic line, because the club hasn’t always owned the adjacent land. The members play the course this way, and the players have had all week to prepare with the OB in mind. I’m not buying into the upset.

Dylan Dethier: It’s terrible! It’s very bad and not good and should never have happened. The club hasn’t always owned the adjacent land, but they do own it now, symbolism be damned. No tee shot should have O.B. both left AND right. That’s target golf and it’s antithetical to the entire ethos of links golf and of Royal Portrush, which are both pure and spectacular. Yes, McIlroy hit a horrific shot. But there’s no reason that should be O.B. rather than a bad lie and a bogey start. 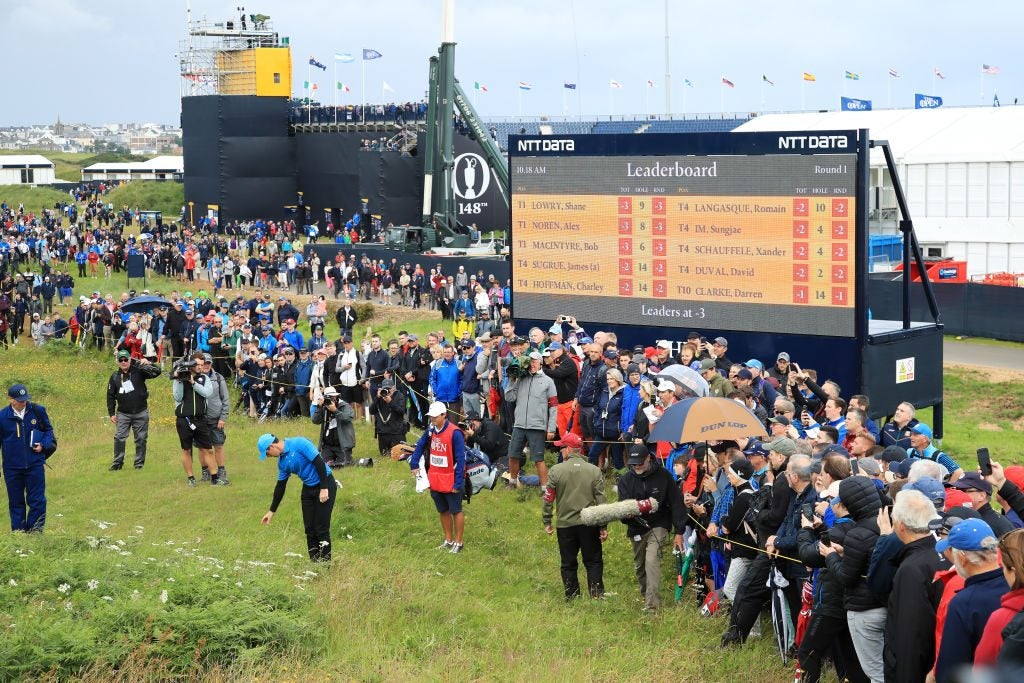 Rory McIlroy takes a penalty drop on the first hole during the first round of the 148th Open Championship.
Getty Images

Dethier: I’m trying to adjust to your U.K. quirkiness here, LKD, I am! But fish pie luncheon is one thing. Rows and rows of white stakes on both sides of the first hole is a whole other beast.

LKD: The fish pie was fine, and so is the O.B. If there was water there nobody would complain at all.

Blomin’ Darren Clarke piped a driver down the middle for the first and nobody mentioned it then. Rory hit an atrocious golf shot; a roping 50-yard hook that couldn’t have gotten more than 40 feet off the ground — with an iron. It was exactly the kind of shot that deserved to be punished severely, not be rewarded with a decent angle into the green and a trampled-down lie in the spectator rough. You can’t have it both ways, golf fans. You can’t complain that golf has become too much about power, then cry foul when one of the world’s best players can’t hit an iron within two posts 100 yards apart.

Marksbury: Well said, Luke. Dylan, I hear you too. Are white stakes antithetical to links golf? It’s definitely a weird look. I do agree on that point. But I think we’re having an extra-emotional response to this because of what happened to Rory. It seemed like his Open dream died within 10 seconds of starting his round. It’s a letdown for everyone. But at the end of the day, these guys are all professionals and should be able to hit an iron in the fairway, wind or no wind.

Alan Shipnuck: I have no opinion about fish pie but the O.B. left stinks. Having it down the right is defensible because there are corporate boxes hard against the fairway. But there is plenty of good linksland left of the fairway that is arbitrarily out-of-bounds, mere steps from a firm, fast fairway. With the wind howling off the right the O.B. is in play for every ball with a little hook spin. The penalty is far too high for one bad swing on the jittery opening tee ball.