PORTRUSH, Northern Ireland — At a small seaside park across the water from Royal Portrush, two teens on bicycles gazed across at the water, monitoring distant signs of the Open Championship, then stealing looks at their phones, checking the leaderboard.

“He had an awful bad day yesterday, but he’s doing better today,” one said knowingly.

“Way better,” the other chimed in. “He’s putting for eagle right now!”

A roar traveled over the water, the type of roar that, in this part of the world, could only accompany one player. Something good had happened to Rory McIlroy.

McIlroy, a 30-year-old who grew up an hour from here, had been the story of the day on Thursday, when he began with an 8 and finished with a 7 and shot an 8-over 79 that inspired endless analysis that included words like “choking.” That was hardly the way Northern Ireland had planned this tournament for its favorite son, the betting favorite. Hardly the way McIlroy had planned it, either. 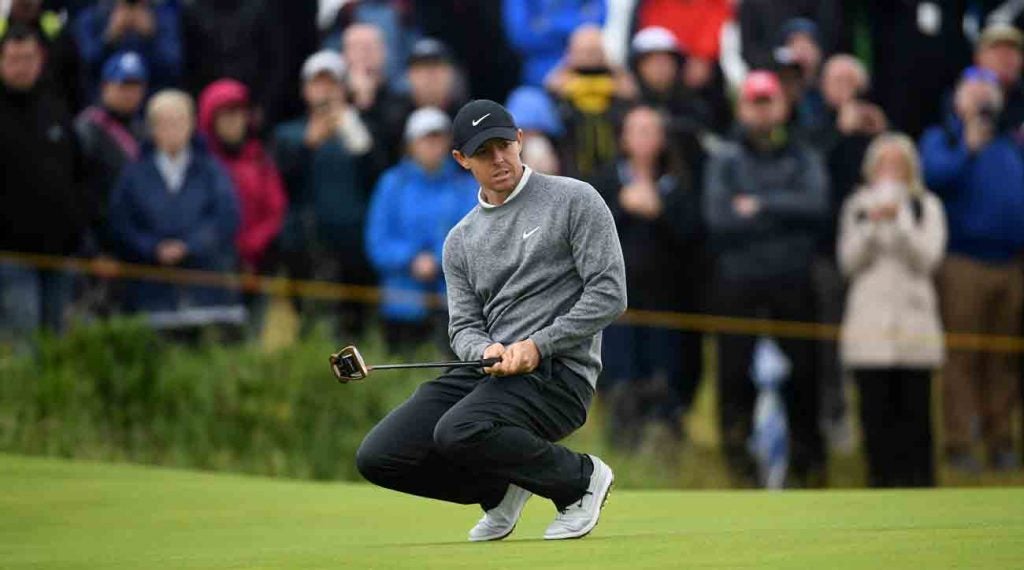 McIlroy teed off early on Thursday and late on Friday. After plenty of waiting, his second round began far better than his first. Birdie at 3. Birdie at 7. It was a good start, but it hardly made him a threat to play the weekend. Still, a satisfying development.

.@McIlroyRory rolls in his second birdie of the day to move to +6 #TheOpen

Then came something more. A birdie at 10. Another at 11. McIlroy was emotive on the course, fully engaged, wholly invested. At the par-5 12th, he roped the type of tee shot that served as a reminder he’s better at that one thing than just about anybody on the planet.

A short iron in gave him a look at eagle, which he two-putted for a third consecutive birdie. The cut line hovered at +1, with a chance that it could get to +2. In the drizzle, crowds that had been three deep were suddenly four, then five, then more.

The patrons at the Kiwi Bar in downtown Portrush (“up the town,” in the local parlance) shouted at their TVs. Eventually, it got so tense they said nothing at all.

“Rory’s not going to do it,” one resigned patron said.

His friend interjected. “Why did you even f—- come here, mate?!”

McIlroy found a bunker at 13 and made bogey, which seemed to spell the end of things. But he came right back with a birdie at 14, then another, even more improbable, at 16. No. 14 and No. 16 played as two of the three hardest holes on Friday.

Can @McIlroyRory make the cut?

He just missed birdie at 17. Then he missed the green at 18. Some fans at the Kiwi clung to their barstools. Others paced about. McIlroy was on the screen, and he studied the pitch from every angle. Finally, he addressed the ball, and there were shushing, calls for silence. The pitch kicked up, pin-high, but missed left. There was a loud, collective sigh, on site and in the pub. But then one patron started clapping, and others soon joined him, cheering the bid.

“It’s a valiant effort,” the SkySports commentator said as McIlroy’s pitch on 18 missed the hole. That talking head was right: it really was something to see. 79-65 is a hell of a thing.

McIlroy came onto the SkySports broadcast. “It’s going to hurt for a little bit,” McIlroy said. He was choking back tears. He’d felt it. How could he not? McIlroy has always been a spectacular golfer; he’s also always been definitively human.

A Portrush local watched McIlroy intently, empathetically, taking it all in. “He was trying too hard,” he said. “But he did his best.”