Rory McIlroy has no interest in a Ryder Cup without fans 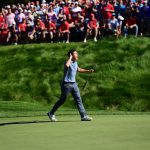 Rory McIlroy is one of the greatest talents currently playing on the PGA Tour, and arguably of all-time. He’s also one of the most honest and open pro golfers around. On Wednesday, he put that reputation on display by sharing his strong opinions about a potential fan-less Ryder Cup.

When golf’s governing bodies released a revised schedule for the remainder of the year with plans to resume play in June, they also announced that the 2020 Ryder Cup at Whistling Straits would go ahead as planned with its original dates of September 21-27.

The plan calls for the U.S. Open to be played the week before. But one wrinkle in the announcement allows for all of these tournaments to be played without fans in attendance, if necessary, to prevent the spread of the coronavirus. Not having fans in the galleries is one thing for a regular Tour event, but it’s a whole different story for the Ryder Cup.

On Tuesday, McIlroy conducted an Instagram live stream sponsored by TaylorMade, where he revealed his thoughts about competing at Whistling Straits without fans. And he’s clearly not thrilled with the idea.

“If it came to whether they had to choose between not playing the Ryder Cup of playing it without fans,” McIlroy said on Tuesday, “I would say just delay it a year.”

He also noted that while not having fans could be an advantage for the European team, it wouldn’t be worth it in the end.

“Obviously it would be better for Europeans to play without fans because we wouldn’t deal with some of the stuff that you have to put up with, but at the same time, it wouldn’t be a great spectacle. There would be no atmosphere, ” McIlroy said.

Earlier this week, PGA of America CEO Seth Waugh, whose organization runs the Ryder Cup, agreed that the experience would be dramatically altered without spectators, but he also admitted that a fan-less event could happen.

“[Ryder Cups] are pretty unique, and the fans are the Ryder Cup to a certain degree,” Waugh said on the “Talking Golf with Ann Liguori” WFAN radio show. “It is hard to image one without fans. We have begun to talk about whether you can create some virtual fan experience, and we are going to try and be as creative as we can.

“To be determined, frankly, whether you’d hold it without fans or not,” he continued. “For the Ryder Cup it’s particularly important, so we will be very careful about that. It’s a very unique thing, and I think if we can pull it off this year it will be an amazing exclamation point to the year.”

We’ll have to wait and see if McIlroy’s publicly-stated opinion has any influence on the PGA’s final decision.