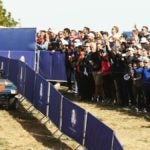 And now, people, the exciting conclusion to our three-part miniseries: Being Seth Waugh in the Age of Covid. (Here’s Part I, and here’s Part II.) In this episode, Waugh discusses his expectations for the Ryder Cup, scheduled for Whistling Straits, in rural Wisconsin, Sept. 25-27.

On Sunday, I asked Waugh about the prospect of a Ryder Cup without fans.

“That’s one of our big decisions, is the Ryder Cup the Ryder Cup if you have it without fans,” he said. “If you don’t have fans, the question becomes, ‘Is that a true Ryder Cup or not?’”

He mentioned his conversations with Steve Stricker, the U.S. Ryder Cup captain.

Waugh talked about how Jay Monahan from the PGA Tour, Keith Pelley from the European Tour and other golf officials, Waugh among them, have been working together to create a schedule, one that includes the Ryder Cup.

“Jay has been amazing about it,” Waugh said. “Every time he gives up a day it costs him money. To his season, to his FedEx Cup. Golf is a company. We run the business of golf. We’re the board of directors. So how do we act in the interest of all the stakeholders? The bodies of golf have come together to act in the best interests of the game.”

McIlroy is not only one of the most thoughtful players in the game, he’s also a two-time PGA Championship winner, so his voice is particularly well-heard in the virtual (for now) hallways of the PGA of America. Plus, McIlroy’s wife, Erica, is a former PGA of America employee.

But McIlroy could also have one of the great autumns in golf history: In late September, playing for captain Padraig Harrington, he could help the Europeans win another road-game Ryder Cup, as they last did in 2012, at Medinah, where McIlroy met Erica Stoll. She helped McIlroy get to his Sunday tee time under stressful circumstances.

Then, in mid-November at Augusta, McIroy could become the sixth man to complete the career Grand Slam. All he needs to do is win.

Seth Waugh would surely be happy with half of the scenario. In the meantime, he’s hoping for inexpensive, fast and easy Covid-19 testing, “a return to normal,” and a Ryder Cup with Rory McIlroy, with fans — and ending with the cup staying Stateside.

Michael Bamberger welcomes your comments and suggestions at Michael_Bamberger@GOLF.com.