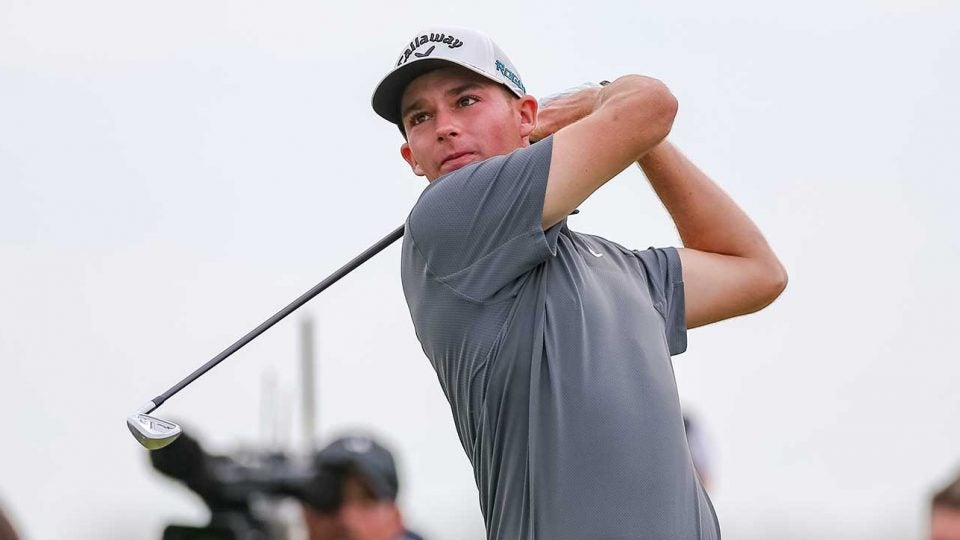 DALLAS (AP) — Aaron Wise strolled up the 18th fairway in the fading twilight, lifting his hat over his head a couple of times as the thinned-out crowd cheered what would soon be his first PGA Tour victory at the AT&T Byron Nelson.

The 21-year-old rookie pulled away from Marc Leishman at the turn after a four-hour rain delay to start the final round at the new Trinity Forest course Sunday. Then it was just a race to finish before nightfall so he wouldn’t have to wait at least another 12 hours to celebrate.

Wise shattered the Nelson record at 23 under, shooting a 6-under 65 to beat Leishman by three strokes as both became the first to finish the Nelson at 20 under or better. Leishman, who shared the third-round lead with Wise after leading the first two days, shot 68.

The treeless links-style par-71 layout, a few miles south of downtown Dallas, was defenseless with softer fairways and greens and no wind once the morning storms passed.

The Nelson celebrated its 50th anniversary with a return to Dallas after 35 years at the TPC Four Seasons in suburban Irving. Rory Sabbatini set the previous record on that par-70 layout at 19-under 261 in 2009.

“It’s everything I’ve dreamed of,” said Wise, who won once each on the Web.com and Canadian tours. “I felt like when it rained today I was really going to tear the course up just because it allowed me to hit driver, which is my strength. I got a lot of short irons in my hand and was able to make a lot birdies.”

Branden Grace matched his career-best 62 from last year’s British Open — which was the lowest round ever in a major — and finished at 19 under with J.J. Spaun and Keith Mitchell, who had matching 63s.

Hometown star Jordan Spieth again couldn’t improve on his best Nelson finish from his first start as a 16-year-old amateur in 2010. The three-time major winner, and highest-ranked player in the field at No. 3, shot 67 to finish at 11 under. Spieth tied for 21st.

Instead, Spieth has been joined by another 21-and-under winner, with Wise cruising a month shy of his 22nd birthday and two weeks after the 2016 NCAA individual champion at Oregon tied for second at the Wells Fargo Championship, two shots behind Jason Day.

Spieth doesn’t have a top 10 finish in eight Nelson appearances, the most of any tournament for him.

“Felt like I played better than I scored,” Spieth said. “Typically when you say that, it just means putts didn’t go in.”

Mitchell, also a rookie seeking his first win, and Ryan Blaum had matching 30s on the front nine, with both playing the last six holes on that side in 5 under. But Wise had five birdies over those six holes, and added one on the 10th while Leishman bogeyed.

His lead suddenly at four shots, Wise cruised from there without another par — and didn’t need one. Blaum’s run of five straight birdies ended with a bogey at 10, one of three on the back nine for him. He shot 66 and finished at 16 under with Kevin Na (68) and Jimmy Walker (67).

Leishman set a 36-hole Nelson record that was previously shared by Tiger Woods because of calm wind the first two rounds. A blustery Saturday brought scores up, but Trinity Forest was even more benign for the final round than it was the first two without its firm fairways and greens.

“Springtime in Texas, this is very rare to have three days with no wind,” Spieth said. “This course typically plays like (Saturday). That’s what you’re looking at normally three out of the four days here.”

Adam Scott shot 65 to finish tied for ninth at 15 under but was projected to finish just outside the top 60 needed to avoid sectional qualifying for the U.S. Open. The 2013 Masters champion hasn’t missed a major since 2001.