Roars, tears and a coronation for the ages: Behind the scenes of a win many believed would never happen

ATLANTA — Tiger Woods called it a stampede. It felt more like the bulls running through the streets of Pamplona. As Woods marched downhill to the 18th green on the verge of his 80th PGA Tour title, the ropes opened behind him and a tidal wave of booze-fueled humanity rushed past troopers and knocked over volunteer marshals.

There was still the formality of getting out of a greenside bunker at 18, but for the Tiger faithful at East Lake, their man had already done it: He’d made Sundays great again.

They exhorted as if at a religious revival, breaking into spontaneous chants of “U-S-A” and “Ti-ger, Ti-ger.”

For fans of Tiger, this marked the second (third? fourth?) coming of golf’s savior. The latest Comeback Tour is now complete after Woods underwent a fourth back surgery in April 2017 that fused a vertebrae. It has been nothing short of miraculous and his loyalists showed their enthusiasm for the 14-time major champion from the moment he arrived at the course with a three-stroke lead over Rory McIlroy and Justin Rose.

Woods walked through the corridor of roped-off spectators to the 1st tee showing no emotion but fully aware of what was at stake. He shook hands with McIlroy, then belted a baby-cut that split the fairway. After their tee shots, he and McIlroy strolled side by side down the fairway. Woods drilled a mid-iron to the elevated green. When the crowd roared its approval, he knew it was good.

It was only the 1st hole but when Woods’s 10-foot birdie putt rattled in, it was like a roundhouse right that floored McIlroy, who would go on to post a feeble 74.

The cheers of the crowd engulfed Woods. “A couple of guys thought someone holed out on the 1st hole,” he said. “It was just me making a putt.”

Woods has struggled to find fairways even in the best of times, but he hit nine of 14 Sunday, while McIlroy hit just three and Rose managed only four. East Lake’s wiry rough is difficult to overcome, especially when spotting golf’s greatest closer a three-stroke lead.

Woods led by five at the turn, but gave a stroke back at No. 10. Not too worry. As the 2017-18 season unfolded, something amazing happened: the galleries adopted Woods as the underdog. Sunday was more of the same. Crowds lined tee boxes and fairways elbow to elbow, 10-, 15-deep. Loving superlatives fluttered around the fairways like confetti. “It’s your time,” a woman yelped. “You’ve got this, Tiger,” a man screamed. The crowd swelled as Woods grew closer to victory. Fans climbed trees and dads placed daughters on their shoulders for a better vantage point. Woods took note.

“I guess it’s different now because the clapping is gone, right?” he mused. “You can’t clap when you’ve got a cell phone in your hand.”

When Woods rapped in a 13-foot birdie putt at the 13th hole, the crowd circling the green exploded. Moments later, a second eruption of cheers emerged from the Grey Goose 19th hole and other hospitality tents as the TV delay showed the putt drop. The lead grew to five.

What looked to be a certain victory parade, though, became a more taut affair as Horschel closed in 66 and took the clubhouse lead at nine under and Woods began leaking oil.

Woods barely cleared the water at the par-3 15th and made bogey, then tugged his tee shot at 16 and had to wedge out back to the fairway. Another bogey and his lead was trimmed to two. When he drove into the left rough and flew his approach at 17 long, Woods knew he was in danger of going to the 18th tee with only a one-stroke cushion. As he stood over his pitch, a spectator broke his concentration. Woods rubbed his hands together, reset, then popped his sand wedge under the ball, letting it release to 4 feet. 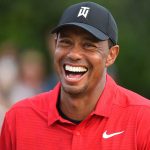 You may also like Tour Confidential: Was Tiger’s win the greatest comeback in sports history?

“I had to try to play for a little heater there,” Woods said. “And it came out a little bit warm, which was great, and rolled down next to the hole. But that was a big hole for me.”

With a two-stroke lead on 18, Woods found another fairway and knocked his approach into the right greenside bunker. Victory appeared to be a forgone conclusion as long as he wasn’t trampled in the swarm of fans that broke through the ropes. It was the culmination of an incredible celebration, and it reminded Woods of his rookie year in 1997 when he came down the last hole at the Western Open in Chicago.

“That was a little bit like that, but not this fevered pitch,” Woods said.

What was going through the mind of the greatest golfer of his generation as he closed in on career win No. 80?

“When I was hitting that bunker shot, just like every weekend hacker, just whatever you do, don’t blade this thing out of bounds,” Woods said. “Just went for a little chunk and run.”

He leaped out of the bunker and high-fived caddie Joe LaCava. As McIlroy cleaned up on the green, Woods realized what he was about to achieve. His eyed welled up. He took a moment to collect himself and after four jittery holes, he’d come home in 37 (and a 72 overall), good enough for a two-stroke victory over Billy Horschel. His tap-in for bogey didn’t result in his trademark uppercut. Instead, he lifted both arms to the sky.

Several of his fellow competitors including Rickie Fowler, Davis Love III, Zach Johnson, and Matt Kuchar — who wasn’t even in the field at East Lake — waited by the scoring area to congratulate him. After PGA Tour Commissioner Jay Monahan gave Woods the Calamity Jane replica putter that serves as the trophy awarded to the Tour Championship winner, Woods stood on the 18th green late on a sunny afternoon, basking in the glow of a victory that many said would never come.

“Did you ever see a scene like that?” NBC’s Dan Hicks said.

Never before, and likely never again.