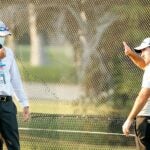 Nick Taylor and a rules official go over Taylor's options on Friday on the 9th hole at Waialae Country Club.

Nick Taylor, as he did on his previous 125 shots through two rounds at the Sony Open, hit his 126th from his natural right-handed swing.

Thanks to his left-handed one.

On the 503-yard, par-5 9th at Waialae Country Club on Friday, Taylor hit his drive left and off the tall netting that separates the driving range from the hole, and his ball dropped inches outside of out-of-bounds fence posts below. Taylor could not swing righty due to the fence. Taylor, after talking with a rules official, could not swing lefty, either, due to the net.

Taylor, wisely, was applying the rule for temporary immovable obstructions, which says:

“The additional relief provided by this Local Rule includes the ability for a player to take relief when the TIO is located on the straight line between his or her ball and the hole (known as “line of sight relief”) by moving sideways, keeping the same distance from the hole, so that the TIO is no longer between the player’s ball and the hole (also known as moving along the “equidistant arc”).

“When a player takes relief from a TIO, whether under this Local Rule or the relief procedures in Rule 16, the player is guaranteed complete relief from physical interference.”

Taylor took a drop to the right and hit his second shot — right-handed — to within about 50 feet of the hole. From there, he pitched to about 3 feet and rolled in the birdie putt, and after two rounds, Taylor led by two.

“So the lower part of the fence, the chain-link fence, is the actual boundary that defines the out of bounds, that separates the 9th hole from the driving range,” analyst Justin Leonard said on the Golf Channel broadcast. “The netting above the chain-link fence, the protective netting, is a temporary immovable obstruction. I wasn’t sure he was going to get relief here because he really didn’t have a swing due to the chain-link fence, but he’s going to give it to him because it’s between his ball and the 9th green, so that’s what he’s getting relief from.

“I think what he was saying was, he would have played it left-handed, and if he did that, that T.I.O. would have been in his line to the target,” added analyst Mark Rolfing.

Taylor, after his round, said he had “a hunch” he would get relief. Why’s that, Nick?

“I had been there in the past and got a drop,” he said. “I called an official just to double-check. It was a fortunate break to get that job. Easily could have probably gone under the fence, but to bounce off and get a drop was a break, and it was nice to take advantage of it.”