How Rickie Fowler might have figured out social distancing 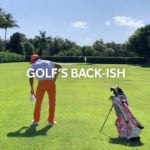 The Centers for Disease Control and Prevention has said that proper social distancing during the coronavirus pandemic is 6 feet. The PGA Tour has suggested that length in its Health and Safety Plan in advance of its return to play. Sunday’s TaylorMade Driving Relief skins game, between the team of Rickie Fowler and Matthew Wolff, and the team of Rory McIlroy and Dustin Johnson, will abide by the 2 yards.

Fowler and Wolff did that mark about 50 times better.

In a Farmers Insurance ad posted to Fowler’s social media feeds this week, Fowler looks off into the distance before raising a pair of binoculars to his eyes and holding them there for a few seconds. He’s made out his guy on the green and he’s made out his guy’s golf shot on the green before lowering the binoculars and picking up a bullhorn that’s sitting to his left.

Fowler congratulates Wolff from about 100 yards away.

“Nice shot, Wolff!” he says into the bullhorn.

Fowler lowers the megaphone as “Golf’s Back” appears on the screen. It eventually changes to “Golf’s Back-ish.”

“Just because @matthew_wolff5 and I will be social distancing on the course doesn’t mean we can’t cheer each other on,” Fowler wrote on social media.

Fowler’s answer to social distancing follows his answer to the absence of fans, both for Sunday’s event and at least the four events on the PGA Tour. In another Farmers Insurance ad, Fowler drops a putt, but without a gallery, the cheers are also dropped. Until he turns on a nearby speaker.

“No live crowds, no problem,” Fowler wrote under the ad shared on his social feeds.