Remembering golf photographer Leonard Kamsler, who changed how we see the game 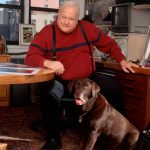 Leonard Kamsler, who died Tuesday, was as innovative as he was prolific.

Leonard Kamsler, a ground-breaking golf photographer who for decades shot for GOLF Magazine and earlier this year received the inaugural PGA of America Lifetime Achievement Award in Photojournalism, died Tuesday. He was 85.

Kamsler’s library of images exceeded 200,000. He covered 40 consecutive Masters, 22 U.S. Opens and 17 PGA Championships; at Augusta National, he was the first photographer to position remote-controlled cameras behind the 12th and 15th holes.

Kamsler’s innovate style also extended to how he shot players’ swings. Pushing the limits of a Hulcher camera in the 1970s, he devised a way to shoot more than 200 images per second, capturing swings as they’d never been seen before. His archive of more than 400 swing sequences includes virtually every player of note, including Sam Snead, Arnold Palmer, Jack Nicklaus, Mickey Wright and Tiger Woods.

Kamsler had many strengths, but his vast range was near the top of the list.

“Leonard did it all, from portrait and course photography to live action stills from the Tour and instruction pics,” said David DeNunzio, GOLF’s editor in chief. “His innovations in high-speed film and flash basically created the ‘swing sequence,’ which to its credit provided the most intimate glimpse in technique and swing dynamics in its day, fueling both readers’ and instructors’ passion for improvement. Before there was Trackman, there was Leonard, his lens, and the desire to continually push the envelope.”

Kamsler shot all the greats, even the famously camera-shy Ben Hogan — well, sort of. According to one story Kamsler liked to tell, he was assigned to snap a swing sequence of Hogan in Texas. “Hogan would never, ever permit anyone to photograph him,” Dave Allen, a former GOLF Magazine instruction editor, wrote in a text message on Tuesday. “So Hogan was out on this one hole with a shag bag to hit balls. Leonard tried to camouflage himself as a bush and sneak up on Hogan. He went through some great pains to do this, hauling his heavy camera out there and then covering himself with some green plant life he gathered along the way. Well, there’s a reason they called Hogan The Hawk — he spotted Leonard nearly right away, picked up his bag of balls and moved on.”

Kamsler, who grew up in North Carolina, had an interest in photography from a young age; his father gave him a movie camera when he was 12, igniting Leonard’s passion for visual arts. Years later, as an undergraduate at Duke University, Kamsler took an art appreciation class that had a lasting impact on him.

“The PGA of America is deeply saddened by the passing of Leonard Kamsler, a pioneering photojournalist whose talented eye entertained and inspired generations of all who love the game of golf.” — PGA President Jim Richerson pic.twitter.com/7dTVtnCtLv

“I was in a class led by Professor W.K. (Bill) Stars,” Kamsler told Bob Denney of the PGA of America. “He said to ‘exhaust the possibilities of whatever you do, take it all the way.’ I didn’t know at the time that I was finding the greatest thing that could happen to me. Professor Stars had a poster over his door with words I have never forgotten: ‘Will I Be a Teacher They Will Always Remember?’”

The PGA of America awarded its Lifetime Achievement Award in Photojournalism to Kamsler in January.

“His legacy extends beyond talent and an eye for capturing the best in golf,” then-PGA of America President Suzy Whaley said in a statement at the time. “His impact upon his profession extends for generations by the photographers that he took under his wing to give encouragement and guidance.”