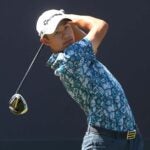 Collin Morikawa pictured during the final round of the 2021 Open Championship.

Collin Morikawa, at 24 years old, won his second-career major championship on Sunday at the 149th Open Championship at Royal St. George’s Golf Club in England. Ahead of this week’s event, Morikawa made a number of impactful changes to his almost-all-TaylorMade equipment setup.

As GOLF’s Managing Editor for Equipment Jonathan Wall highlighted earlier this week, Morikawa changed out his previous TaylorMade P730 short irons (7-9) for the company’s P-7MC irons. Morikawa found the sole geometry of the P-7MC irons, which have a slightly sharper leading edge, to move through the turf better and help him find the center of the face more often. They also helped him dial in his spin to increase distance control.

“It was interesting, as he was warming up, the sound off P730 was not Collin-like,” Rietveld said. “It’s unique to say this, but it was just fractionally different to what I’m used to hearing. Then he goes into the MC and you can hear the strike come back.”

Aside from just the irons, Morikawa also made a slight putter change to deal with the slower greens this week, adding 10 grams of weight to his TaylorMade TP Juno putter. To achieve the weight change, he switched out his two 2.5-gram sole weights for two 7.5-gram sole weights.

Morikawa’s equipment changes may seem small, but his extra attention to detail helped him get dialed in for the week, and ultimately win the 2021 Open Championship. Below, we dive into Morikawa’s full bag setup.