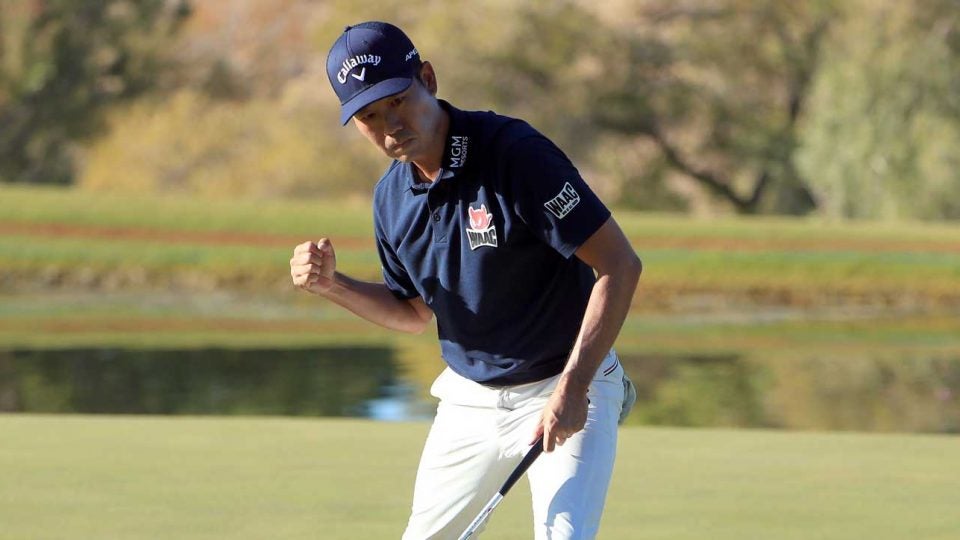 Kevin Na followed up his 62 with a 61 Saturday.
Getty Images

TPC Summerlin and the Shriners Hospitals for Children Open are seeing some incredibly low scores this week, led by Kevin Na’s Saturday 61.

Na made 10 birdies and no bogeys to take a two-shot lead over Patrick Cantlay in Las Vegas. Na has used back-to-back rounds of 62 and 61 to vault to 22 under, which is a three-round scoring record.

Na was far from alone. Cantlay shot a 63 of his own while Pat Perez and Tony Finau shot a pair of 62s. There were eight rounds of 65 and seven rounds of 66. The third round scoring average was an incredible 67.75. It was the lowest weekend round at the event in its 37-year history.

His 10th birdie of the day to shoot 6️⃣1️⃣. He leads at -22. 💪#LiveUnderPar pic.twitter.com/ewCxqCgla9

In the last five years, only three events have featured a full-field weekend round with a lower scoring average. That’s how rare the showing of low scores was with the Saturday setup at Summerlin.

Na and Cantlay will form the final pairing Sunday afternoon, with Perez and Sam Ryder out ahead of them. A similar set up could find any number of players winning.

Even with such a seemingly easy setup, Phil Mickelson was one of a few players who struggled to get anything going. Mickelson made three birdies, but offset them with six bogeys, dropping him 48 places on the leaderboard. Mickelson is ranked 45th in the world after struggling for the last eight months, and is playing the Vegas event for the first time since 2005.