A housing shortage in Fanling, Hong Kong, has birthed a dispute between local golfers and Labour Party advocates that turned violent on Friday.

According to a report by the South China Morning Post, a recent government report suggested one of the best ways to solve Fanling’s housing issues was to develop the land currently occupied by the golf course, which is leased by Hong Kong Golf Club. The course has enough land to support 13,000 housing units if it were to be developed. 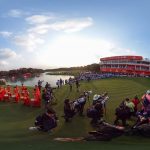 The local Labour Party organized a protest at the course on Friday. While the protest was peaceful, demonstrators eventually opened an entrance gate that had been protected by security officers. When that happened, one golfer took the situation into his own hands, literally, when he grabbed a trespasser by the throat and threw him to the ground. The assailant, surnamed Tong and a member of the Hong Kong Professional Golfers’ Association, was arrested when he reported the incident to the police, according the South China Morning Post, while Oscar Lo, a 28-year-old Labour Party member was left with “red marks on his neck after the scuffle.”

The protest coincided with a press conference announcing the formation of the Hong Kong Alliance of Golfers, an organization that will lobby on behalf of the golf course. 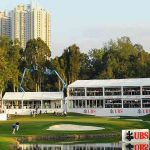 You may also like China Closes 111 Courses in Attempt to Conserve Water, Land

Golf in China is fraught with complications. While golf course construction has been banned since 2004, more and more courses and golf resorts are built every year for wealthy Chinese golfers and tourists. Further complicating the situation in Fanling is the fact that Hong Kong has a semi-autonomous government under the “one country, two systems” rule.