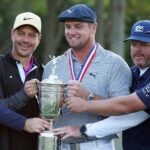 Bryson DeChambeau smiles for the cameras after his U.S. Open win at Winged Foot.

Bryson DeChambeau stormed to victory on Sunday to capture the first U.S. Open and first major title of his career in impressive style on Winged Foot’s treacherous West Course. It was a culmination of a lifetime of commitment and hard work, particularly in the last year when he transformed his body to improve his game.

Some of his fellow PGA Tour pros took to Twitter after his win to acknowledge as much, and to offer much-deserved congratulations for a hard-fought victory. Zach Johnson, a two-time major champion himself, was one of the first to toast Bryson.

“Brutal yet fun week at Winged Foot. Hats off to @b_dechambeau for the “W”, his first major, and winning the 40 and under division,” Johnson tweeted, before adding a joke at his own expense, “I’ll take my medalist in the 40 and older. Finding the positives.”

On Monday morning Bryson replied to Johnson’s tweet, thanking him for sticking around and greeting him when he walked of the 18th green, a scene captured on the NBC final round broadcast.

Bubba Watson, who was in contention himself for a time and finished T31, also gave Bryson his due, as did Francesco Molinari, Ross Fisher, Lanto Griffin and Colt Knost.

Others congratulated DeChambeau while also acknowledging the criticism he receives for the unique way he plays the game, even during and after his major-winning performance this week. Among them was Luke Donald, who included this helpful reminder, “Remember what the goal is everyone – golf is a game with a score and the lowest score wins – it’s not subjective – get the ball in the hole in less strokes than your competitors.”

Ian Poulter took it one step further, saying that Bryson “isn’t my cup of tea,” before admitting, “what he is is a Major champion and I have huge respect for winning the @usopengolf. Changed his swing and body to try and over power golf courses. Done it his way.”