This proposal would REALLY solve the slow play problem in golf 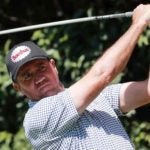 Scott Hend tees off during the World Golf Championships-Mexico Championship earlier this year.

Should a professional golfer play slow, European Tour player Scott Hend says, it would quickly cost them. First money. Then a stroke. And no warning.

“I think it should be money. Like, straight up, bang, money,” Hend said on a video on his Twitter account this week, later suggesting the fine would be $5,000.

“Not a warning. Bang, money. And then second, bang, shots. Give them shots.”

The PGA Tour has agreed – but not to that severity. At the start of the season, it said the 10 slowest players on tour would be placed on a 60-second shot clock and be potentially given stroke penalties, and that players who would take more than 120 seconds to hit a shot would be given a warning, followed by a $10,000 fine.

Slow players, Hend said, care about only one thing.

“Don’t ever tell me the guy’s a nice guy, but he’s slow. There’s no such thing. A slow player is a guy who thinks about himself and himself only,” he said. “He doesn’t care about the other two guys in the group, because I’ve played with guys that are slow and they take advantage of two guys that are quick. It’s all about themselves, and no one can convince me any other way.”

Hend did offer a solution for slow players.

Slow players could also watch Hend. Just do so quietly. And don’t eat.

“All I expect is my 40 to 45 seconds. That’s all I want,” he said. “Don’t rip your glove. Don’t drop your club. Don’t talk to your caddie about where your ball went. Don’t talk about your yardage and don’t talk about what you had for dinner. Let me have my shot, and you can talk about it after that, it doesn’t matter.

‘What I do for you on the golf course is what I expect back, and it’s not much. I don’t move around, I don’t talk to my caddie. I don’t pull out bags of muesli bars and open them up in the middle of your backswing.”

Hend later tweeted that he was talking strictly about professionals.

Apparently, the golfers at a course in his home country of Australia are slow for other reasons.

“When I play with the boys at Nudgee they usually have beers and a radio on….Different levels of enjoyment,” he said.