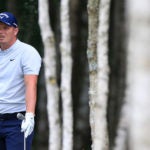 The European Tour is playing the Forest of Arden Marriott Hotel & Country Club this week. The first three words are not decorative. The course in Birmingham, England, is in an actual forest. Trees, according to the course’s website, “neatly line the fairways.”

Callum Shinkwin would argue that adverb.

During Saturday’s third round of the Hero Open, Shinkwin’s drive ended up at the base of a tree on the 563-yard, par-5 3rd hole. He asked an official if he could get a drop. He was denied. Shinkwin could hit only a punch-out.

His contact is square. Both club to ball. And club to tree.

After hitting the ball, Shinkwin’s iron hits the tree, snapping it at a 90-degree angle in the middle. After the swing, he pulls the club back and looks down at it, the top half dangling. It doesn’t make it.

Shinkwin looks to see where his ball rolled to. He walks away with the top half in his left hand and the bottom half in his right hand. Shinkwin manages a smile.

“I thought this was going to one way – it’s going to go straight round it,” he said after the round. “And there’s picture evidence as well.”

Shinkwin would par the hole and finish the round with an even-par 72. He is tied for 24th after opening the tournament with a 68 and a 69.

He is also out one club.

Phil Mickelson shoots even par, but never in his career like this