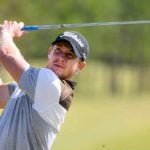 Victor Lange tied for 51st in his last event on the PGA Tour Latinoamerica.

On a Sunday morning, over his cup of coffee, in his family’s home, Victor Lange read one word.

Victor Lange was the only known PGA Tour golfer to test positive for Covid-19.

“It was a pretty good cup of coffee,” he said.

He told his girlfriend, Gabriella Van Niekerk. He had been originally tested only because of her. She hurt her toe while the two were vacationing in South Africa after he had returned home from a PGA Tour Latinoamerica tournament, and before entering the emergency room, Lange received a test.

He told his parents, Suzette and Richard. They had watched their son quarantine himself in their home after he had received news of the positive test in mid-March. Victor has been asymptomatic throughout, and he has wondered his parents’ fate if he had come home without a test.

“That was always my concern – my parents’ health,” he said. “If I went out into the world and contracted a disease and became ill, so be it. That’s kind of the risks of life – there are so many diseases and bacteria out there that that’s just the reality of life.

“But I would be extremely upset if I actually came home with a disease that I was asymptomatic to – that I had shown no symptoms of – and then infected my parents and they got seriously ill. That would be the worst thing.”

Lange then told his fellow players. And the players, in turn, have reached out to him. Lange’s last tournament, the Estrella del Mar Open in early March in Mexico, was also the PGA Tour Latinoamerica’s last before it went on its current hiatus. How is Lange feeling? How was he feeling? How do you know whether a sick feeling is maybe something more? He’s their expert.

“It’s almost like people are on high alert these days,” Lange said. “You could give a little cough, and all of a sudden, a lot of eyebrows are raised. Basically all I’ve been communicating is just keep a cool head, keep positive and do the best you can in whatever situation.”

Which is also how he believes professional golf should proceed.

“The game could look a little differently than it used to. I think it is going to be challenging, but I think it’s doable to get past all these things and make it happen.”

Which is also how he believes professional golf travel should proceed.

Lange lives in South Africa. The PGA Tour Latinoamerica’s tournaments have stretched across North America and South America. Three continents of airports, airplanes, hotels and transportation. Lange will be there.

On March 8, Lange made a par at the Estrella del Mar Golf & Beach in Mexico, and he hasn’t touched a golf club since. He’s tested positive – luckily – for the virus that has caused a pandemic. He’s quarantined. He’s been worried about the people he cares about. He’s refreshed an app on his phone to tell him he’s negative.

He said he’s been mentally ready for all of it.