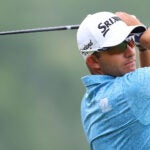 Dean Burmester ranks second on the European Tour in driving distance this season. He hits his tee shots, on average, 329.20 yards.

His other shots are far from short.

During Friday’s second round of the South African Open, Burmester hit a 2-iron off the tee on the 11th hole at Gary Player Country Club in Sun City, South Africa. He hit a 2-iron to within about 4 feet of the hole on his second shot. The 11th hole? It’s a 569-yard par-5. Burmester covered nearly 600 yards in two shots without using a driver or a wood.

“Burmester, iron off the tee, and he’s absolutely nailed that,” an announcer on the broadcast said after Burmester’s second shot.

“Has he got the legs? Has he ever got the legs,” the announcer said as the ball landed. “I mean, that is a serious par-5. He’s just hit iron, iron to four and a half feet.”

“Great shot, Dean,” a person in the background said.

“Thanks,” he said again.

Burmester would make the eagle putt, and he’s two strokes behind leader Jamie Donaldson. This week, he’s also been as good short as he’s been good long. Through the two rounds of the Open, he’s ranked first in Strokes Gained: Putting.

After his round, Burmester retweeted the European Tour’s video of his second shot.

A commenter, fittingly, left a gif of Dwayne “The Rock” Johnson flexing.