Pro nearly DQ’d after being stuck in elevator, miraculously makes the cut 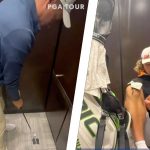 The elevator getting stuck was funny for a few minutes. And then it wasn't.

The first 15 minutes of being stuck in an elevator were not a big deal. It was the next 30 minutes where things started to get dicey for Korn Ferry Tour player Nick Voke. His tee time was approaching.

The 26-year-old and his caddie Leondard Powell had entered the lift at 6:13 a.m. with plenty of time to make it to the golf course Saturday morning. Due to a suspension of play the night before, they had just one and a half holes to complete, and even worse, they were sitting on the cutline at the Veritex Bank Championship.

But suddenly, the elevator shut down with them stuck between floors. Making the cut started to seem even more unlikely, as did simply arriving to the course in time to try.

“It was funny for like five minutes,” Powell said. “We were just sitting there on our phones, putting it on Instagram. Then it was like, ‘Ooh, this isn’t actually moving.’”

As you can see in the video below, the pair had a little fun with it. Voke rapped a one-foot putt into the elevator wall. A few minutes later, the reality began to set in, especially when Tour representatives said if they arrived late, there was nothing they could do. Disqualification would be the result.

“We were standing up, we were honking everything, jamming on the door.” Voke said. “ We were trying to pry the thing open and no luck.”

At one point, apparently, Voke even discussed climbing out of the elevator as it was stuck between floors. Powell, much less willing to take the risk, resigned himself to the fact that Voke might need another caddie for the 1.5 holes without him.

Eventually, after 46 minutes, they were freed from the chamber and rushed to the course for an abbreviated, 10-20 minute warmup and a nervy wedge into the 17th green.

“The morning was such a whirlwind, so we didn’t know what to expect,” Voke said. “Caught it a little thin, didn’t fly as far, kicked a little further and we made a birdie.”

After a gritty par on the 18th, they had made the cut and earned a nap before heading out for the third round. Voke proceeded to make eight birdies in the afternoon and card a third-round 65, even with a double bogey. Though he wasn’t able to make good on that with a solid fourth round, it was quite the lesson in patience and resilience against things out of your control. At least largely out of your control. Powell did make clear they’d have one motto moving forward:

“We’ll be taking the stairs now.”

'I want to hear it': What Justin Thomas needs from his swing-coach father