Best of 2019: The Presidents Cup proved golf is in a really good place 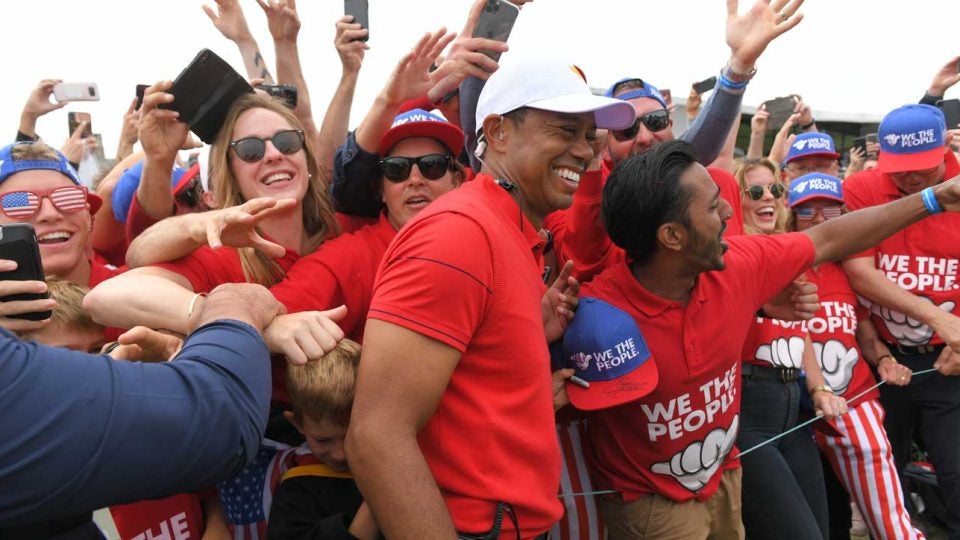 There had to be at least one sober person on the victory ride: the bus driver, seated right in front of the winning captain and the event’s best player, Tiger Woods. The whole bus, the players and their significant others, were all singing the immortal Queen football anthem, “We are the Champions.” That song, when sung by heavyweights defeating flyweights, is unseemly, but this was not that. The Americans, after winning the Presidents Cup, could go all Freddie Mercury because, over the course of first three days of the four-day competition, they had turned themselves into the underdogs. Then, in the Sunday finale, they eked out a 16-14 victory with superior top-to-bottom play in the Sunday singles. No time for losers, whatever that means.

When you wake up and remember you won the #PresidentsCup

It was a long strange trip for the Americans, in this 13th playing of the Presidents Cup. The event was held for the third time on a large swatch of buggy linksland in suburban Melbourne, the composite course of the Royal Melbourne Golf Club, in the sandy southeastern corner of Australia. The event’s format and structure has changed over the years and this year there were two 12-man teams, the Americans playing the Internationals, with 30 points up for grabs. The Sunday lineups were telling. In each of the 12 matches, starting with Tiger Woods of the United States of America facing Abraham Ancer of Mexico, the American player had a higher world ranking than his opponent.

That it was close at all helps make the case that the MVC (most valuable captain) was Ernie Els, who ran the International team. Everybody praised Woods’ captaincy, but it surely looked better after the Americans won. Just by keeping it close, Big E, often seen in reading glasses, did more with far less.

Both captains, each of whom helped define the other over the course of their long careers, played against type. Els, in his Hall-of-Fame prime, was a true feel player who would practice by hitting sand wedges just to groove the rhythm that was already in him. (His theme song is “I’ve Got the Music in Me”) But as the International captain he went all Money Ball, bringing in all your better metrics and personality analysis. Woods, surely a golfing artist but more than anything a golfing engineer, reprised Ben Crenshaw, his first Ryder Cup captain. Crenshaw’s “I got a good feeling” (1999) Woods turned into “I trust my players” 20 years later.

Someday, we will really understand the depth of what Woods did with his time, aside from his play. He played in three matches, twice with Justin Thomas and then in the Sunday singles, and went 3-0. He sat himself for two matches on Day III. For him to get ready for a round of golf is a three-hour ordeal, and even in summer, Down Under days have 24 hours.

As captain, Woods had a tricky task that required immense diplomacy: managing Patrick Reed. Yes, Reed was picked for the team by Woods, after not making it on points, so you could say Woods brought this upon himself. But back on Nov. 7, when Woods picked Reed, the man who helped Woods into his fifth green jacket, Woods couldn’t of course know what was going to happen one month later. Reed brought an immense distraction to the U.S. team with a blatant rules violation in Woods’ own early-December event the week before the Presidents Cup. Reed made things more complicated by his response to getting caught improving his lie and things became even more complicated by Reed’s caddie’s response to a heckling fan. That is, his brother-in-law, Kessler Karain. Woods, showing the stubborn streak that is at the core of his greatness, paired Reed with Webb Simpson for three straight sessions. They lost three times. Had the U.S. not pulled out a victory on the event’s last day, Reed, his two practice swings in a Bahamian waste bunker and his play in Australia would have been the first, second and third story out of Royal Melbourne.

But let’s not let Reed’s immaturity and petulance be the final stamp on this remarkable Presidents Cup, which was as entertaining and exciting and interesting as any Ryder Cup. To see these 24 players on that golf course — even when TV turned it into a pancake — was so much fun and a reminder that you do not need water and rough and fertilizer to make a course challenging and interesting. In golf, as in life, less is often more. What a golf course needs most is angles, and charm. A golf course you love has charm.

But there was something even more elemental to rejoice at the Presidents Cup. We Stateside golf fans know the American team. Patrick Cantlay contended at the Masters. Bryson DeChambeau is the biggest, slowest and smartest man in golf. Tony Finau is the most delightful. Rickie Fowler, married and now 31, remains such an impish talent. Dustin Johnson might still take his talents to the NBA. Matt Kuchar is going to smile his way to the Hall of Fame, if he can keep this going for another 10 years. Patrick Reed, enough said. Xander Schauffele is even more talented than he is modest, which is so unusual these days. Webb Simpson and Gary Woodland were U.S. Open winners in California, and when you win a U.S. Open in California, that’s forever. (Fleck, Tiger, etc.) Justin Thomas is probably the best player in the game right now. Unless it’s Tiger Woods.

We’re not here to celebrate them, because they had their bus ride and everything else to celebrate themselves. The 2019 Presidents Cup, before, during and after, was and is an opportunity to get to know some of the players we don’t know as well. Ben An! Honest Abe Ancer! Adam Hadwin, straight out of Canada and well-bearded. Sungjae Im was absolutely enchanting, and he went 3-1-1 most amiably. King Louie and Adam Scott we all know. Marc Leishman we kind of know. But how about that C.T. Pan? Would anybody be shocked to see Cameron Smith on a leaderboard at a major in the new year?