The Players Championship never found its rhythm … until it did 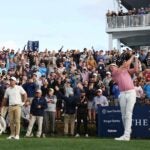 On Monday, the Players Championship finally found its rhythm.

PONTE VEDRA BEACH, Fla. — The chance of rain on Monday afternoon at the Players Championship was almost zero. Officially, the oddsmakers held it at eight percent, though there were braggarts in the gallery who said they’d seen five, and suckers who were coaxed into believing it was actually 10.

Given the way the rest of the tournament went, it’s a wonder anyone bothered to check the forecast at all.

Soon it was 4 p.m., and right on cue, the heavens opened. Big, soaking globs of water fell from the sky; rain that rivaled any rain this week. The few fans who’d bothered to show up for the first Players Championship Monday finish in 15 years sprinted for cover. The players sighed, then opened umbrellas.

“It’ll only be a few minutes,” one stubborn fan said as the rain shifted from falling to teaming near the 11th green.

Before long, he’d followed the rest of his companions in search of shelter, only to find there were no unoccupied spaces. He rounded the corner toward the stadium on No. 17 when suddenly, a voice yelled from a bush.

On Monday, the “tournament that wasn’t” found itself abandoned by some of its few remaining supporters … in favor of a dry bush.

The Players Championship was madness. Beautiful, ridiculous madness, right up until the very end. But it was not kind, and it was not normal — not for a long while, at least.

Those who endured the slog of four rounds at TPC Sawgrass this weekend deserve a medal. Many of them will get a very nice paycheck instead. But if there were ever a week pros earned the whole of their salary, it was this one.

First came Thursday’s rain, which was followed by Friday’s rain. Friday’s rain was blown away by Saturday’s winds, which also ushered in Sunday’s cold front. The origin of Monday’s rain is anyone’s guess, including the weathermen, but at least it only fell for a handful of minutes.

For the players, all that weather amounted to a tournament week from hell. Three on-again, off-again days were replaced by two marathons, the second of which came on a Monday afternoon. There wasn’t ample practice time, range time, rest time or even daytime (tournament organizers scrambled to ensure a Monday evening finish, which they snuck under the tag). Players and caddies rose early and worked until dark.

The work wasn’t easy, either. Conditions at TPC Sawgrass were gettable for a whopping total of five hours this week, time split between Thursday evening and Monday morning. For the remaining 60 or so hours of eligible tournament play, they ranged from “cruel” to “questionably fair.”

“[It was] near impossible, but that’s kind of what we do,” Paul Casey, the tournament’s third-place finisher, said. “Very strange having the two days off, but clearly I got the good side of the draw, so that helped. The rhythm, I think the last two days have taken their toll. It’s just tough playing 27 holes each day. I don’t particularly enjoy it.”

The “rhythm” to which Mr. Casey refers is perhaps better described as a lack thereof. Nobody hit their groove at TPC Sawgrass, not the players, not the fans, not even the eventual winner, Cameron Smith, who nearly handed the tournament away when he pumped his drive into the pine straw on the 72nd hole and then hit his approach into the water.

“For most of the week I didn’t know what day it was,” Max Homa, who finished T13, posted on Twitter. His feelings were shared by Patton Kizzire, who flashed a smile on his way into the locker room.

Some of it can be attributed to a case of the Mondays, the first at the Players since 2005. At the first tee on Monday morning, PGA Tour commissioner Jay Monahan opted out of his normal suit and tie in favor of an unbuttoned collared shirt, slacks, sneakers and a pair of wire-rimmed glasses. As his Tour’s biggest event launched its final round, he maintained a polite distance from the crowd, chatted quietly for a few minutes, then disappeared unnoticed into the clubhouse behind him.

Like the commissioner, the tournament’s final day began quietly. What few fans were in attendance in the morning disappeared into the golf course, which was empty. But then morning flipped to afternoon, and clouds grumbled into the sky.

By 4 p.m., rain fell for the final time at this Players Championship, and the tournament came back to life with it.

As the downpour commenced, a glut of players screamed into contention. Smith’s two-stroke lead evaporated into a four-way tie with a group including Viktor Hovland, who’d played his previous 19 holes at nine under. Hovland chunked his chip on the 15th, undoing his own tournament chances in the process. At almost the same time, Tom Hoge chipped in for eagle, briefly fluttering within a stroke of the lead. But Hoge’s story was quickly overshadowed by Keegan Bradley, who somehow found himself tied atop the leaderboard despite a disastrous, two-stroke rules gaffe earlier in the week.

Behind all of them, though, Smith was fighting for his life. On the driveable par-4 12th, Smith blasted his tee shot into a wad of thick rough well right of the green. His next chip shot traveled what looked to be 10 yards too far, but proved perfect, nestling down less than a foot from the flagstick. He made birdie, taking back the lead for the final time.

When the sun finally returned, the Players had flipped to quintessential form. Smith and the leaders turned for the home stretch at the Stadium Course just as a sizeable gallery formed around them. After narrowly surviving a dead-pull into the trees off the tee on No. 16, Smith finally made his way to the famed island green. Fans enveloped the area, dropping into a hushed silence as he addressed his tee shot.

As Players champions frequently do, Smith barely flinched, flushing his approach shot onto the green’s tucked, back-right shelf. When Smith eventually did make his way to the 18th green a few minutes later, he found Monahan standing in a crisp grey suit, just as he always does. And when Monahan introduced him as the Players champion, the grounds crew raised the flag of his native Australia just a few hundred feet away, as they always do.

“I’ve never been one to expect much of myself,” Smith said afterward. “My expectations are I wake up, go to the gym, practice as hard as I can for a couple hours, and then go and have a good time. That’s it basically every day. My expectation is to prepare well and then kind of let everything fall into place.”

It was fitting then that Smith, the Jacksonville resident via Queensland, would be the person to survive this exceedingly bizarre week. It was a week without sense, and certainly without expectation.

And it produced a tournament that wasn’t, then suddenly was.