Tour Confidential: Should the Players Championship continue amid coronavirus fears? 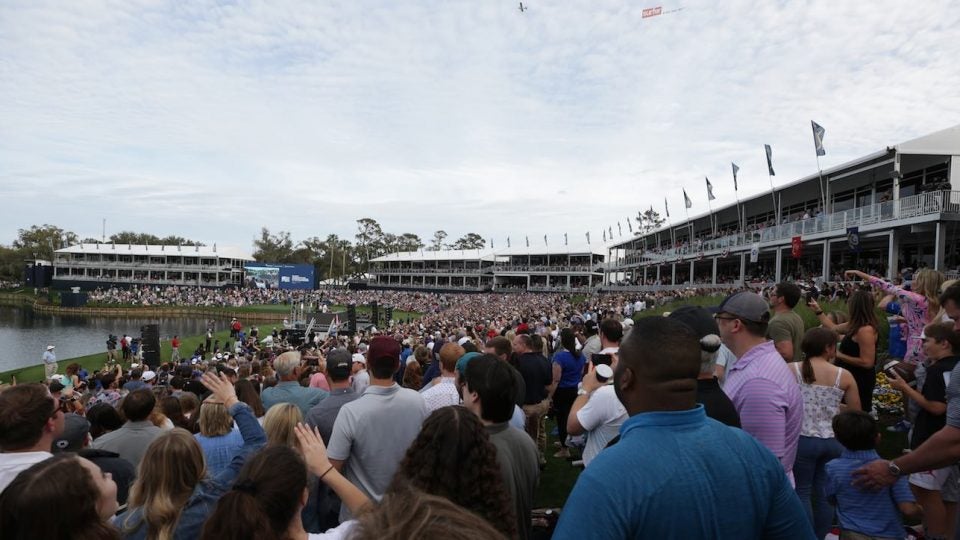 Check in every week for the unfiltered opinions of our writers and editors as they break down the hottest topics in the sport, and join the conversation by tweeting us @golf_com. Following a series of big announcements relating to the coronavirus, we’re launching an emergency Tour Confidential to break down the ramifications. UPDATE: The PGA Tour released a statement overnight saying it was aware of the rapidly changing developments regarding COVID-19 and continuing with the tournament as scheduled, and offering fans no longer wanting to attend an opportunity for an exchange or refund. The Tour said it would provide an additional update at 12 p.m. ET on Thursday.

1. With the threat of the coronavirus intensifying on Wednesday, President Trump suspended travel to and from Europe for 30 days, the NBA suspended its season until further notice and the NCAA announced it would conduct the NCAA basketball tournament without fans. But as of Wednesday evening, the PGA Tour is still moving forward with the Players Championship. Right move?

Dylan Dethier, senior writer (@dylan_dethier): Since I’m writing this from a restaurant in Jacksonville Beach, let’s start with the event that begins in 9 hours. The Players can’t reasonably let fans in given the context of everything else going on — right?! For reference, I saw Patrick Reed sign probably 200 autographs today. I saw boatloads of retirees there today. Golf courses have major advantages over basketball stadiums, for sure. But imagine the scene by 17! Maybe the tournament should go on, but hard to imagine fans attending. Right?

Zephyr Melton, assistant editor (@zmelton13): The fact that the Tour hasn’t taken a firm stance on this matter yet is concerning. Other major sports leagues are proceeding without fans. The Tour is … holding Chainsmokers concerts? Golf tours around the world have been quick in postponing and cancelling events. What’s going on in Ponte Vedra? The coronavirus pandemic is evolving rapidly. The Tour better take some decisive action, even if it is at the expense of their crown jewel at Sawgrass.

Luke Kerr-Dineen, managing editor (@lukekerrdineen): Golf exists in a bubble. That’s not news to anyone, but this week has been a reminder of how truly divorced from reality our game currently is. Every major sports league in the world — and now even the President of the United States — has recognized this as the pandemic that it is, and made wide-scale changes accordingly. Golf has proceeded like it’s business as usual, not fully appreciating the fact of how uniquely exposed it is. Players, coaches, caddies, fans, the equipment itself players use, travel from all over the globe, every week. It’s too late for golf to lead the sports world on this matter, but there’s still time to follow suit. Proceeding with the Players this week without fans seems the safe, smart call based on how other leagues are handling their respective situations.

Nick Piastowski, senior editor (@nickpia): My question would be, what is there to be gained by playing on? Listen, you and I are all golf fans, and we love to see the game go on and history to be made and champions crowned. And I wholeheartedly believe that the Tour has done its due diligence. But why play with ANY fire? Play it when it’s right and folks are safe. What’s the possible answer when fan X sits on No. 17 on Thursday at TPC Sawgrass, comes in contact with fan Y with coronavirus, and fan X gives it to someone susceptible, if they aren’t themselves? The definite answer is you are proactive. If the NBA is doing something, if the NCAA is doing something, sports institutions who you would think have vetted this properly, what is stopping the Tour?

James Colgan, assistant editor (@jamescolgan26): Yesterday, I described the PGA Tour’s approach toward coronavirus at the Players as “vigilant stoicism.” Now, “vigilant stoicism” appears as oxymoronic as it is. It bears noting that the NBA cancellations were largely driven by Rudy Gobert (a player who contracted the virus), while other leagues like the NHL are maintaining the status quo…for now. But still, it seems the Tour finally has to pick a lane — the night before 50,000 are expected to descend upon TPC Sawgrass. I’ll tell you this: I’m happy I’m not the one getting paid to make that call.

Alan Bastable, executive editor (@alan_bastable): These are scary, uncertain times that have left even contagious disease experts mystified. Who knows what the right call is? (Heck, I’m still questioning my decision to ride New Jersey Transit this morning.) Jay Monahan said earlier in the week that decisions around whether to proceed with events will be made “market to market.” In this case, the Tour is conducting its flagship event on its flagship course. Pulling the plug would be an agonizing move, especially on the eve of the tournament. Public pressure undoubtedly will be INTENSE tomorrow, Friday, through the weekend, but at this point hard to fathom the show not going on. 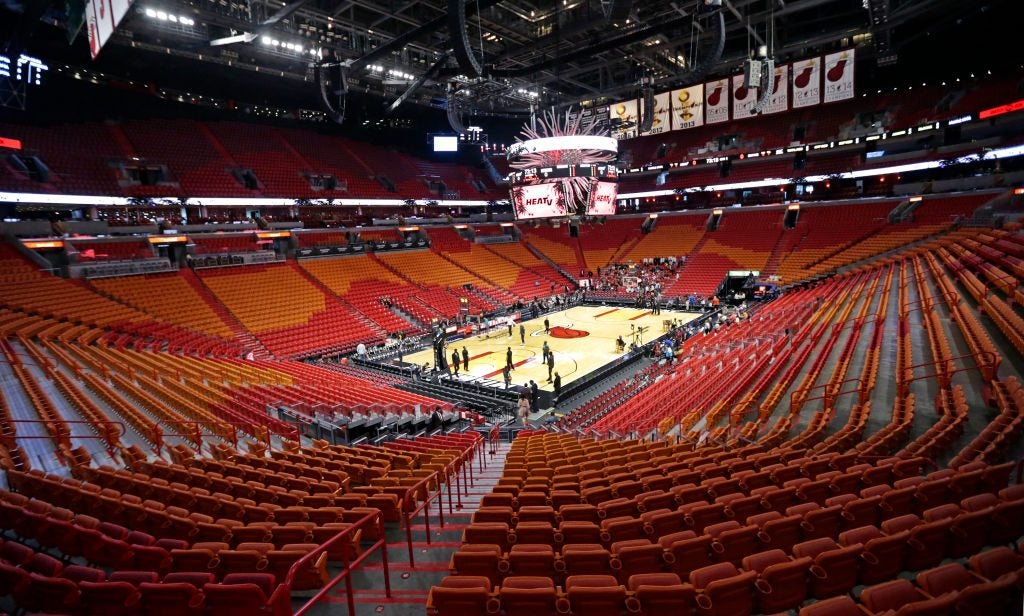 The NBA announced Wednesday that it is suspending its season due to the coronavirus.
Getty Images

2. Impactful decisions like the NBA’s tend to have a domino effect. How, if at all, do you see this move from a major sports league impacting the PGA Tour calendar, at least in the near term?

Dethier: Again, given the demographics of the PGA Tour’s fans, I’d say the Tour is headed the way of the NCAA and I’d lean toward us NOT seeing fans at Tour events for the foreseeable future.

Melton: If nothing else, the decisions from the other major sports leagues should put some pressure on the PGA Tour to, at the very least, contest the next month or so of competition in the absence of fans. Will it hurt their bottom line? Certainly. But there are few industries in the world that won’t be harmed by this pandemic. Maybe this is wishful thinking on my part, but it feels inevitable that the NBA’s decision will have an effect on the Tour.

LKD: The NBA’s decision is in large part the byproduct of one of their players testing positive for the coronavirus. It needed to take strong action accordingly, and it did. Golf is not in that situation, but it’ll still feel the ramifications of it. Hosting events behind closed doors has become the default setting in sports, and golf adopting a play-tournaments-but-without-fans position would mirror that of the NCAA, Premier League and other leagues.

Piastowski: I could potentially see the “no-fan” decision. The NCAA has taken that step, and golf is an outdoor sport played over wide spaces, possibly making it “harder” to catch the virus. But do players quarantine themselves after every round? As mentioned above, what’s there to be gained by doing so? Take everyone at the Tour who plans the events, take everyone in the cities where tournaments are played, and be on top of when it’s safe for ALL, and play it then. And seriously, WHEN it’s safe again, how fun will that first tournament be?

Colgan: Obviously, the big fish here is the PGA Championship, which is currently scheduled for May 11-17 at TPC Harding Park in San Francisco. While conspiracies are abound of moving the second major to Sawgrass, it still feels WAY too premature to speculate (or even assume) a tournament of that stature could be moved. What’s far more likely to happen, in my opinion, comes in two weeks. IF the PGA Tour decides to shift the schedule, the Dell Match Play in Austin (where the South By Southwest mega-festival was canceled last week) seems likely to be the first domino to fall. But that’s a big IF.

Bastable: The cancellation that really caught my eye, in relation to golf, was that of the Indian Wells tennis tournament. It’s a big-time event — tennis’s “fifth major” — that attracts 500,000 fans over two weeks. Given the outdoor setting, a tennis tournament is a closer parallel to a golf event. That decision — paired with all the European Tour cancellations — is what most got me thinking that the PGA Tour would soon follow suit. Early next week (if not sooner), I suspect we might hear about some PGA Tour sked shakeups. 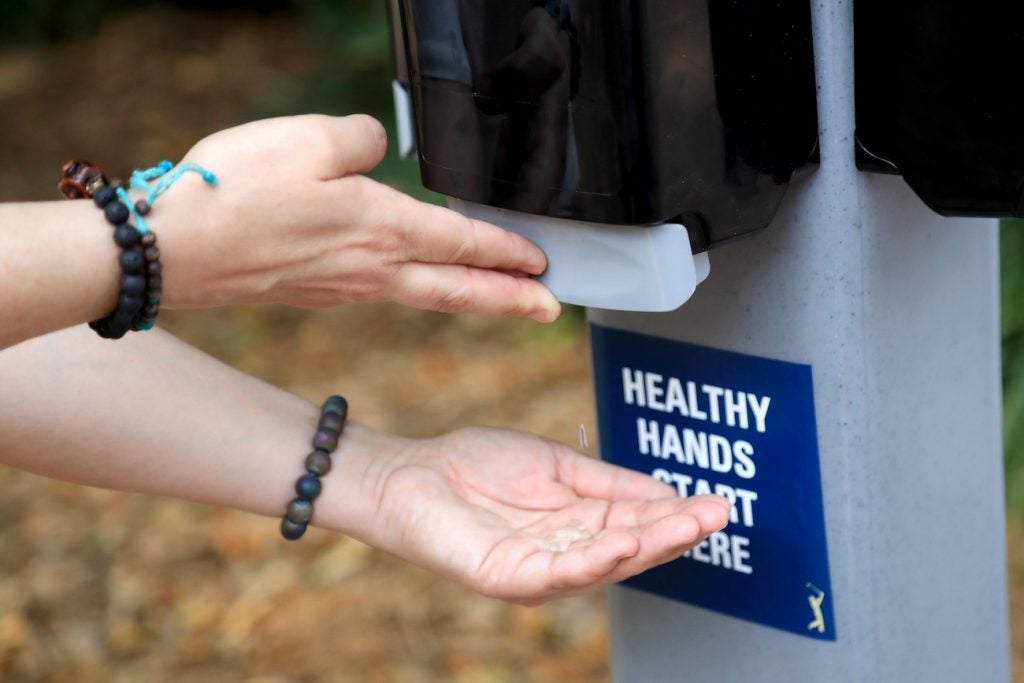 A fan uses hand sanitizer during a practice round at the Players Championship.
Getty Images

3. The first major of the season, the Masters, is less than a month away. Any chance the tournament takes a similar tact to the NCAA and conducts the event without fans?

Dethier: I just don’t think we know enough to say. In other words: Yes, there’s a chance! There’s a chance the tournament doesn’t happen. There’s also a chance of some middle ground, I suppose. None of us are doctors and we’re all at serious risk of being prisoners of the current moment — but it feels at least 50/50 that there won’t be fans there, right?

Melton: It’d be hard to imagine April coming without the Masters proceeding as planned, but a week ago it seemed outrageous to think a major sports league in the U.S. would be suspended because of the coronavirus, so who knows? A fan-less Masters would definitely be preferable to no Masters at all — which hasn’t happened since the World War II cancellations in the 1940s. The bottom line is, we don’t know what tomorrow is going to bring, let alone a month from now. The situation is very fluid. Here’s to hoping those in charge put public safety above all, even the allure of the azaleas of Augusta National.

LKD: Unlike the NBA, the PGA Tour and other sports leagues, Augusta National doesn’t have to worry about running events week-in, week-out, so they’re afforded more time to make a decision where others aren’t. It wouldn’t surprise me to see them forgo fans for the tournament because that’s become the mainstream position among the governing bodies, but they don’t have to make that — or any other — call just yet.

Bastable: We might have found the one problem that even Augusta National can’t solve. Remember, though, fan-less events aren’t without precedent. Just last fall, in the wake of a typhoon, the second round of the Zozo event in Japan was conducted sans spectators. Weird scene. Would be weirder still at ANGC. Instead of birds, they’ll have to pipe in roars.

Piastowski: I could see this move, of course, as mentioned above. But here’s my proposition for the powers-that-be at Augusta: Take the reins on this and be the first U.S.-based golf tournament to say we are playing when it’s safe. When they do it, you know the dominoes will fall, from players, to other tournaments, to the Tour, to sponsors, to TV. I like the idea that sports are relief from the madness and that play should go on. But I can watch some replays, or pop in a movie. And, hey, absence makes the heart grow fonder, right? We’ll get our stroll down Magnolia Lane soon enough. Just not now.

Colgan: Does it seem likelier now to happen than it did, say, two weeks ago? Absolutely. Hell, it seems more likely to happen now than it did even an hour ago. But I’m still erring on the side of caution. The biggest factor in this situation is what we don’t know, and right now, there’s a heck of a lot we don’t know. Let’s not forget that a month ago, this disease was still largely restricted to mainland China. Relative to this situation, a month is a very long time.