‘I can’t believe I’m going to do this’: The inside story behind Phil’s viral dance video 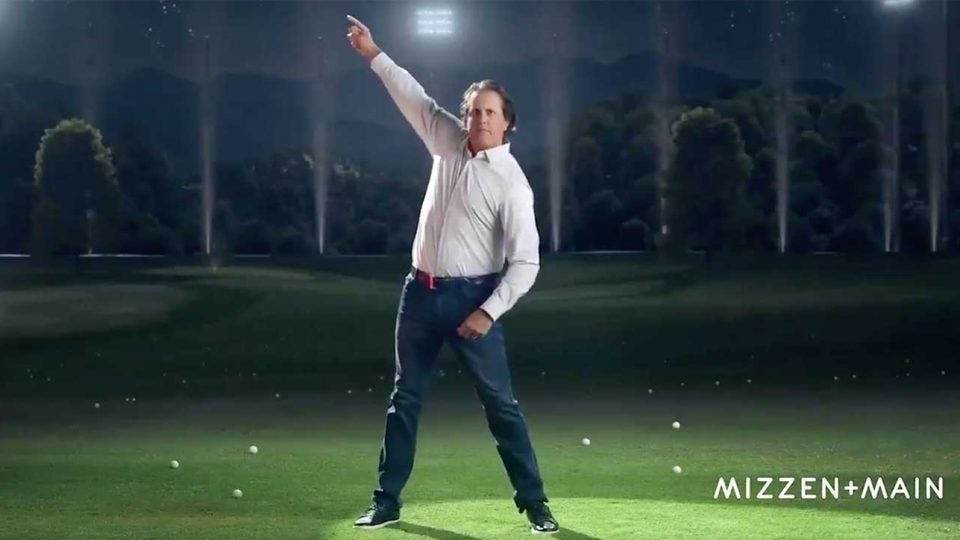 Phil Mickelson caught the golf world's attention on Thursday, but not for what he did on the course.
Mizzen+Main

A few months ago Kevin Lavelle showed up at Phil Mickelson’s Rancho Sante Fe, Calif., home with an idea.

He wanted Phil to dance.

Lavelle is the founder and CEO of the apparel company Mizzen+Main, of which Mickelson holds an ownership stake. The two were still newbie business partners at that point, but Lavelle and his team were already brainstorming ideas for how to use Mickelson to bring buzz to the brand.

Lavelle’s creative director, Richard Ross, dreamed up a video concept that all agreed would rip through social channels like a Kim K selfie. To show off the stretchiness of Mizzen+Main’s dress shirts — the same ones that Mickelson has been wearing at Tour events this year — Ross wanted Mickelson to stand in the line of fire on a driving range, bobbing, weaving and, yes, dancing to avoid the incoming balls. The routine would be choreographed to “Vibrate,” an electro-funk tune by the Austin-based band, Ghostland Observatory.

Lavelle was charged with bringing the pitch to Mickelson.

“I’m not going to lie — it was one of the most uncomfortable moments of my life,” he said Thursday from his Dallas office. “He was either going to go, ‘You’re an idiot and I can’t believe I’m working with you,’ or ‘I love it and I think it’s hysterical.’ There’s really no middle ground for this concept.”

Also in the room when Lavelle presented the idea were Mickelson’s agent, Steve Loy, and wife, Amy.

“At that moment,” Lavellle said, “it was, ‘Oh my god we’re actually going to make this happen.’”

Weeks later Lavelle’s production crew met Mickelson at a warehouse in Southern California. The team set up a 30-foot green screen and brought in 2,000 square feet of turf.

The shoot took all of 90 minutes but Mickelson was anxious at first.

“He looked at me and said, ‘I can’t believe I’m actually going to have to do this,’” Lavelle said. “There was definitely a level of discomfort at first.”

But with each take Mickelson grew looser, literally — grooving and shimming and leg-kicking his way through what would ultimately become a 37-second video that all but melted golf Twitter when it was released Thursday.

Oh, and that stunning moment where Mickelson swings his leg over his head? No special effects required. “Everything you see Phil doing is exactly what we filmed,” Lavelle said.

The only piece of the video that required computer-generated imagery were the balls whizzing past Mickelson. “I would not want to take responsibility for a ball actually hitting him,” Lavelle said.

Needless to say, the video accomplished its mission as far as the folks at Mizzen+Main were concerned. Despite the avalanche of shocked-face emojis and dad-dance jokes on social media, the response to Mickelson’s moves has been overwhelming positive, Lavelle said.

“When we first announced we were working with him in May, the buzz was enormous,” Lavelle. “This blows all of that away.”

How would he sum up the public’s reaction?

“Most people seemed to be saying, ‘I’m not sure what I just watched but I can never unsee it.’”