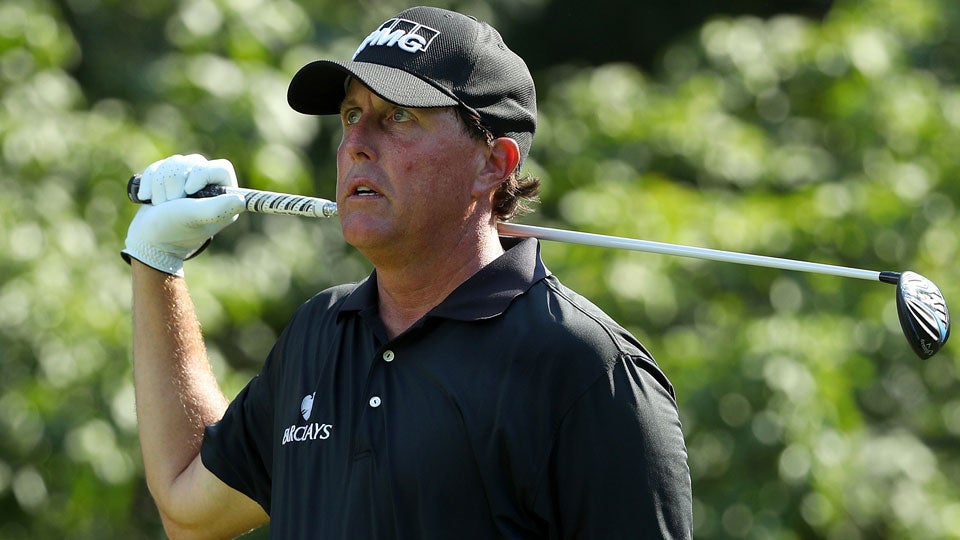 One shot back of McIlroy with two holes to play, Mickelson hit two wedges into the water on the par-5 eighth and took a quadruple-bogey 9. His 71 dropped him to T28.
Getty Images

Phil Mickelson has lived large and played large all his life. It’s why millions of us love the guy. What has Phil done except make our lives more interesting by aligning ours with his? All those heartbreaking losses and Phil-the-Thrill wins. The beautiful wife. The crazy-big tips. The feuds with Tim Finchem. The many hours on the autograph line. The glassy-eyed quotes. From the U.S. Open at Winged Foot, after making a mess out of the 72nd hole: “I’m such an idiot.”

If only we could sweep Phil’s recent out-of-Billions debacle under the clubhouse rug. You know: his alleged debts to the gambler Billy Walters; the money Phil made (and eventually forfeited) in his too-good-to-be-true stock trading.

Can’t be done. You know the phrase “Don’t make a federal case out of it”? This is one. Prosecutors have been after Walters for decades (five indictments), and if he goes to trial on this case, the “professional golfer Philip A. Mickelson,” as the SEC refers to Lefty in its complaint, will likely be a reluctant witness for the government.

Meanwhile, Phil is preparing to take over the old Bob Hope tournament while lawyers, armchair and otherwise, are studying the Tour’s Conduct of Players code. It calls for a minimum two-year suspension for a player who associates “with persons whose activities, including gambling, might reflect adversely upon the integrity of the game of golf.” Billy Walters has done a courtroom dance four times but walked out a free man each time. Still, Phil and Bill hanging in the desert is not exactly Arnie and Ike.

Under cross-examination, Phil’s gambling and debts may be exposed in ways that would leave Commissioner Finchem pining for his old problems: John Daly’s drinking, Tiger Woods’s serial adultery, Dustin Johnson’s failed drug tests. The SEC alleges that Mickelson made nearly $1 million by acting on a 2012 stock tip about Dean Foods given to him by Walters, who was allegedly sharing, and trading on, “material nonpublic information.” Mickelson, according to the SEC, then used his ill-gotten gains to “partly” repay his gambling debts to Walters. Five experts I talked to all said the same thing: Mickelson was lucky not to be charged himself. A new wrinkle in the law saved him.

One of the five was John Dowd, a Washington lawyer and the lead investigator for Major League Baseball’s investigation into the Pete Rose gambling fiasco of the late 1980s. “When you owe a large sum of money to someone like Billy Walters,” Dowd told me, “he owns you.” When Bart Giamatti, the late baseball commissioner, banished Rose from baseball in 1989, he urged him to “reconstitute his life.” For his sake, and the game’s. Gambling is baseball’s only cardinal sin, because it has the capacity to undermine the public’s faith in the scoreboard totals. It would be nice to remember Pete Rose only as the great “Charlie Hustle.” But he was also an arrogant, lying criminal and a compulsive gambler.

Why do we—we the people—go down the hero-worship road again and again? Now is a good time for us to stand up to the PGA Tour hard-sell, which shoves “These guys are good” down our throats so hard, trying to make us think that every last Tour player is Zach Johnson. Some of them are Zach Johnson. And some are just like millions of other people, looking to break the monotony of life through drinking, drugs, sex, gambling, fast cars—high living. But the Tour, completely dependent on its relationship with charitable organizations, tournament volunteers and corporate America, tries to spin us like a roulette wheel and turn the players into saints. They’re just guys.

Baseball has investigators who monitor player behavior, with one eye on gambling. I don’t know if the PGA Tour has anything like that. I sent Finchem an e-mail asking if he would talk about either the Mickelson matter or the broader issue of gambling. Finchem, through his (actual title) chief marketing officer, passed on the former and ignored the latter. How odd. Now is the time to reassure your public, if you can.

I have spent time with Phil—who declined to talk for this story—and have thoroughly enjoyed it. Is he calculating and complicated and not as smart as he thinks? Yes. He’s also generous, engaging, funny and bright. He’s big.

Mickelson has never hid his love for a little action. But the SEC complaint makes you wonder: Is gambling a hobby for him, or a problem? If the SEC allegations are true, it becomes difficult to understand why he would make such red-flag trades. Here are two leading candidates: greed and recklessness. You hope, for his sake, desperation doesn’t also belong on the list.

This matter is not over. My view—worth nothing more than a free roll with unmarked dice—is that a full accounting here would only help Phil and golf. The candor he showed that Sunday night at Winged Foot is what makes Phil Phil.

The question posed in his old Ford spots now has new urgency: What will Phil do next?

This column originally appeared in the August issue of GOLF.