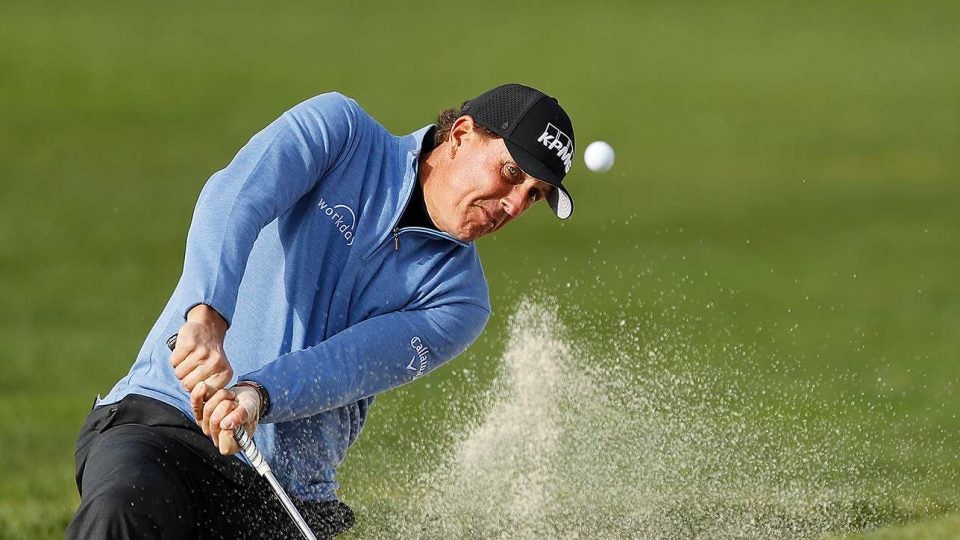 For all the talk of distance in the golf world in the last week, Phil Mickelson’s round Saturday was defined by the opposite. Lefty’s short game was off-the-charts during his third-round 67 at Pebble, pushing him to 16 under for the tournament and one back of the leader, Canadian Nick Taylor.

Phil started off the day dialed in scrambling, making up for erratic play off the tee through the first six holes (two missed fairways, plus a missed green on the par-3 fifth) to start the day three under.

But it was Pebble’s iconic, 110-yard par-3 seventh hole that served as the backdrop for the round to come. Plugged in the back-left bunker after attacking a back-left pin location, Mickelson dropped a perfect bunker shot to two feet and tapped in for par. The brilliant play saved what could’ve been a cataclysmic hole with Taylor, Jason Day and others going low early at Spyglass Hill.

Some par saves rank higher than others.@PhilMickelson said this one is in his top 5.#QuickHits pic.twitter.com/6Kvjkaiyg2

Later, another par-3, this time the monster, 195-yard 12th, threatened to be his undoing. Mickelson blocked his tee shot into the left bunker short of the green, forcing another impossible sand shot—this one from almost 25 yards out—to save par. With no choice but to play it safe, Lefty took an easy two-putt for bogey, falling to 13 under, four back of Taylor.

Just when it seemed that maybe Phil’s early-week flash (including Friday’s 64 at Spyglass) would lead to a weekend fizzle, his round exploded.

The par-4 13th hole, Mickelson having hit consecutive shots into the hazard (first off the tee, then with a long iron from bunker to bunker), set up square in the greenside trap with his legs wide. He slapped the sand, sending the ball up over the steep lip of the rough, out onto the green and into the cup.

At the par-5 14th hole, Phil hit yet another wayward tee shot, this time with his approach checking up just short of the front edge of the tiny green and rolling back onto the false front. Lefty employed what CBS’s Dottie Pepper called a “back-foot sand shot” (and more than a hefty dose of good luck) to knock his ball onto the green, off the flagstick and into the hole. Had it gone anywhere else, he might have had an eight-footer coming back for par.

Mickelson would finish off his round with another up-and-down, this time a birdie on the par-5 18th to push him to 16 under, solo second-place and one back of Taylor heading into Sunday.

The stats were similarly rosy for Lefty—an absurd 4.26 strokes gained: around the green and 4.83 strokes gained: total despite losing nearly two strokes to the field on his approaches.

Of course, he enters Sunday at Pebble with added significance. Another win at the AT&T would give Mickelson six career victories at the event, the most all-time. Not to mention, it would mark his first win in any event since he claimed the AT&T a year ago.

It was all Phil at Pebble on Saturday, with Taylor and Jason Day (at 14 under and in solo third) playing the afternoon at Spyglass. All three return to Pebble tomorrow morning, setting the stage for a dramatic final round. Would you expect it any other way?