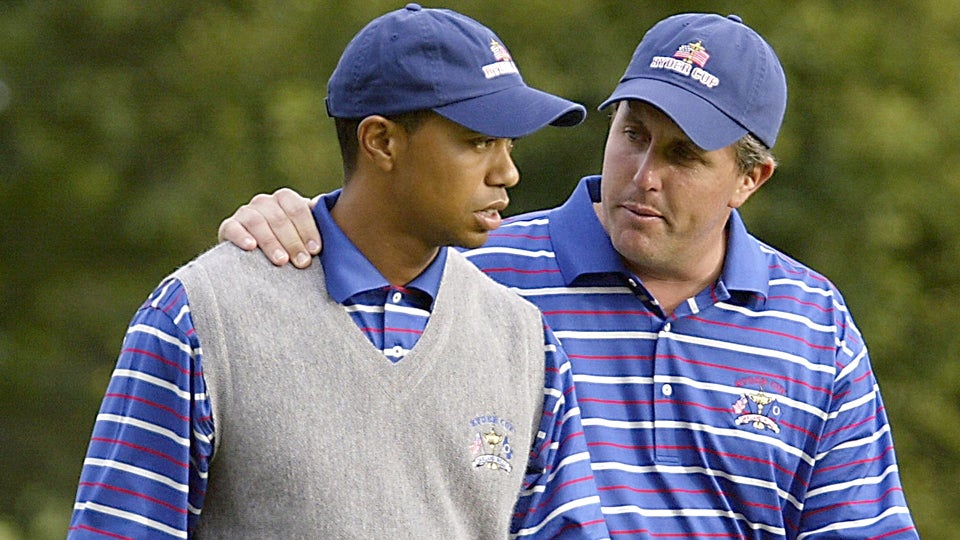 Phil Mickelson and Tiger Woods lost both of their 2004 Ryder Cup matches on the opening day.
TIMOTHY A. CLARY/AFP

CHASKA, Minn. — Phil Mickelson is in his element when he is asked to explain something. He considers himself a smart guy. He is a smart guy. Very smart. In another life, he’d probably be a scientist or maybe a professor. You’d enjoy learning from him.

So for 12 years, he’s been dying to explain what really happened when captain Hal Sutton paired him with Tiger Woods in the 2004 Ryder Cup matches at Oakland Hills. It was a well-known disaster, which Phil admitted readily Wednesday morning here on the eve of the 2016 edition at Hazeltine National.

But there was a story behind the failure—no, an explanation. Phil was asked a question about how important the Ryder Cup captain is. “It all starts with the captain,” he answered. “That’s the guy who has to bring 12 strong individuals together and bring out their best. That’s the whole foundation of the team. I hear, ‘Well, guys just need to play better or putt better.’ Absolutely you do. But you play how you prepare.”

He went on to explain his point in general terms and when he noticed the blank looks among the faces of the media, he offered an example. His pairing with Tiger, a great example from a learning point but an example that was bound to blow up the Internet in short order because he invoked Tiger’s name—instant headlines—and is sure to be misconstrued.

Phil’s issue was that he and Tiger were given only two days notice that they were going to be paired.

“That gave us no time to work together and prepare,” he said.

Phil and Tiger were fierce rivals then—cool at best, unfriendly at worst. The perception behind the scenes was that Tiger didn’t respect Phil or his game and that irritated Phil. The problem with their Ryder Cup pairing, Phil said, was the ball. In foursomes play then, you had to play the same model ball throughout the match. Now, to accommodate the players, teams can change the ball model on the tee of each hole.

“Tiger found out the year before when we played at the Presidents Cup in 2003 that the golf ball I was playing was not going to work for him,” Phil said. “He plays a very high-spin ball and I play a very low-spin ball, and we had to come up in two days with a solution.

“So I grabbed a couple dozen of his balls, I went off to the side, and tried to learn his golf ball in a four- or five-hour session on one of the other holes, trying to find out how far the ball goes. It forced me to stop my preparation for the tournament, to stop chipping and putting and sharpening my game in an effort to crash-course learn a whole different golf ball that we were going to be playing.

“And in the history of my career, I have never ball-tested two days prior to a major. I’ve never done it. Had we known a month in advance, we might have been able to make it work. I think we probably would have made it work. But we didn’t know until two days prior.

MORE: The U.S. Top Players Are to Blame for Recent Failure

“Now, I’m not trying to knock anybody here, because I actually loved how decisive captain Sutton was. I feel like that’s a sign of great leadership. Had we had time to prepare, I think we would have made it work. But that’s an example of starting with the captain, that put us in a position to fail and we failed monumentally, absolutely. To say, well, you just need to play better; that is so misinformed because you play how you prepare.”

When you listen to Phil, you usually think, Hmm, he’s got a point. He’s got one here. Although in the preparation department, he didn’t mention that he switched out his equipment the week before the Ryder Cup. That’s when he bolted to Callaway Golf, so in addition to trying to get a handle on Tiger’s Nike ball, he was also dealing with equipment changes that he chose to make.

The ball was only an issue in the foursomes match, of course. In bestball, Tiger and Phil played their regular golf balls. Phil’s point is that the time spent on adjusting to Tiger’s ball messed up his preparation for everything.

He and Tiger famously lost both matches the opening day and Europe’s rout was on.

Phil just wanted you to know the explanation.

He and Tiger are together again this week. Phil is playing in his 11th Ryder Cup. Nick Faldo is the only other player to appear in that many Cup competitions. Tiger is here as a non-playing vice captain. So they’re teammates again. In a funny moment Tuesday, Tiger was standing in the frame for a team photo—players only. He didn’t realize it or was there out of habit and had to be asked to step out of the picture. You know Tiger will be hearing about that in the team room all week.

“It’s been great,” Phil said of Tiger’s new role. “The last few weeks, we’ve been talking on the phone multiple times a day. It’s been really exciting for us because we’ve been on so many teams for so many years and to have this much input and involvement in the process, the way Davis has implemented everybody’s input, the way he’s brought everybody together and their ideas, has been truly an inclusive process and it’s been fun for Tiger and I to be a part of something like that.”

In the past, Phil hasn’t enjoyed not being in charge. It’s a curse of being smart. People can mistake being negative or selfish for being right. His decision two years ago to call into question captain Tom Watson’s decisions during the losing team’s press conference falls into that category. The timing was bad, it was in public and it was in Scotland, where the British papers feasted on what they saw as arrogant American in-fighting. The Brits loved that.

So a British writer repeated a comment that former European captain Paul McGinley made recently that Phil, because of those comments, is under more pressure this week than anyone else on the American side.

“I can understand why he would say that,” Phil said. “I don’t necessarily agree with that because what I feel is that this is the first time in my 22 years that we are actually involved in the decision-making process. And the decisions we are accountable for every single year, we now have involvement in those decisions and that gives us a whole platform to work forward.

“It’s very much like the model the Europeans have. They’ve had tremendous success in bringing out their best golf and I give them a lot of credit in their ability to lift each other and play their best golf in these events. We’ve seen that for decades from the European side. It’s exciting to be part of the groundwork and foundation of the U.S. side trying to do that now.”

The goal, he said, is just to get the American side in a position to play its best golf.

“I don’t know what that means, results-wise,” Mickelson said. “We are playing a very strong European team. But our best golf will come out this week.”

Notice he didn’t predict a victory? Phil is a smart guy. Very smart.