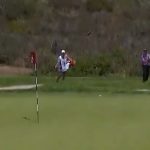 Kevin Na watches his second shot on the 16th hole at Torrey Pines on Thursday.

Na, on the 192-yard, par-3 16th at Torrey Pines, hit his tee shot about 10 yards right off the green and on an upslope during Thursday’s first round of the 2021 U.S. Open. The pin was about 20 feet left of the fringe. To hit his second shot close, he’d have to hit it high.

Four seconds later, his ball was four feet away.

“Yeah, ha!” Byrum said. “He was stuck on the side of that mound, Justin, and that was sort of Phil Mickelson-like.”

“That is what I am here for right there,” analyst Justin Leonard said.

Na’s shot traveled the 50 feet — and went maybe five times that in the air. It dropped just off the fringe and rolled the rest of the way. Na would make his par putt and finish with a six-over 77.

“That ball traveled about 100 yards in the air, but it only went about 20,” Leonard said on the Golf Channel broadcast.

“That was crazy,” Gannon said.

“Good job on our cameraman following this thing,” Byrum said. “There’s no way he expected this. Look at that. He had to go way high to pick it up. What a shot by Kevin Na.”