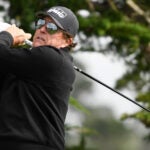 Phil Mickelson hits his drive on Friday on the 14th hole at Pebble Beach.

Phil Mickelson missed the 14-foot putt slightly left and slightly long, walked to the hole to clean up the remaining 11 inches and brushed it in. His round was done Friday at Pebble Beach, and his play was done at the AT&T Pebble Beach Pro-Am. All that really remained on the par-5 18th was to tell his playing partners his score.

But a nine just isn’t very Phil Mickelson, and neither is saying just “nine.”

Mickelson then looked up at Casey and laughed. His golf looked nothing like that of a five-time major champion. But he still sounded like Phil.

On Thursday, Mickelson shot a two-over 74 on Spyglass Hill. On Friday, at Pebble, he was six shots worse. Nine of the strokes came on 18.

Mickelson hit his tee shot down the middle. Good. The next seven strokes weren’t. From 265 out, he hit his second shot into the Pacific Ocean, which lines the left side of the hole. Mickelson dropped his left hand from the club on the follow-through, started to walk forward and exhaled deeply as he watched his ball bounce off some rocks before jumping into the water.

“That’s way out over the water and not hooking back,” an announcer on PGA Tour Live said.

After a drop, Mickelson again hit his ball left and into the ocean, and he again dropped his left hand from the club on the follow-through. This time, Mickelson also gently kicked his club. He took another drop, then hit his sixth shot into the left greenside bunker.

“Oh, this is most improved,” the PGA Tour Live said, tongue in cheek.

From the sand, Mickelson hit his seventh shot 14 feet past the hole. He’d take the two putts from there. His 10-over total was 11 strokes from the cut and better than just four players.

Then Mickelson told Casey his score.