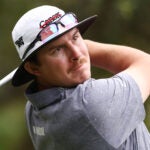 Joel Dahmen hits a drive on the 18th hole during Thursday's first round of the Zozo Championship.

Sherwood Country Club counts, or has counted, such entertainment luminaries as Sean Connery, Mel Gibson, Jack Nicholson, Will Smith and Sylvester Stallone among its members. Over the years, the homes behind the green on Sherwood’s 15th hole have, very likely, seen a celebrity or two. They’ve been entertained.

Dahmen hit his tee shot on the 186-yard par-3 within about 15 feet during Friday’s second round of the Zozo Championship. He rolled in the putt for birdie. He kept rolling.

As the putt dropped, a crowd of about 20, up a hill behind the green, began to cheer. Dahmen stood straight up and extended his arms out.

“Are you not entertained,” Dahmen screamed, waving his left hand with each syllable.

Just over 20 years ago, Russell Crowe asked that same question in the movie “Gladiator.” He was holding a sword when he did. He would win the Academy Award for best actor.

Just over 20 years later, Dahmen asked again. He was holding a putter when he did. He would finish his round in a tie for 40th.

Dahmen was enjoying himself after his round, too.

He tweeted a video of his “entertained.” Below a gif of Crowe’s.