Stories of 2021: Pro golf is at an inflection point. But what’s next? 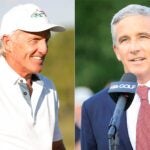 What stories dominated 2021? We’ll turn back the clock (and then look ahead) at five of the biggest talkers of the year.

For a half-century and then some, there was one tour on the mountaintop: the series of televised events, nearly all of them in the Lower 48, featuring the best players in the world playing four days of stroke-play competition, wrapping up on Sunday night. The PGA Tour.

Phil Mickelson and Tiger Woods, as kids in southern California in the 1970s and ‘80s and into the ‘90s, grew up on that tour. What other tour was there?

Now tournament golf is seemingly at an inflection point, with a vast amount of talk (and some definite action) about Middle Eastern oil money flooding ye olde shepherd’s game. It’s fascinating and revealing, but not surprising, to see how differently Woods and Mickelson view threats to the PGA Tour, real or imagined.

Asked earlier this month about his broad interest in any emerging international tour, Woods said, “I’ve decided for myself that I’m supporting the PGA Tour. That’s where my legacy is. I’ve been fortunate enough to have won 82 events on this tour and 15 major championships and been a part of the World Golf Championships, the start of them and the end of them. So I have allegiance to the PGA Tour.”

Imagine all the best players having to go global, what that would do for the game.

Months earlier, speaking about the notion of joining an upstart world golf tour that was then in the news, Mickelson said, “I think it’s very interesting. What’s interesting is the players would be giving up control of their schedule and then compete against each other 14 times or 15 times or whatever the final number is.

“Fans would love it and get to see the best guys play more often and there would be global events. Imagine all the best players having to go global, what that would do for the game.”

That was in May. Seven months later, there hasn’t been much clarity, in terms of how a new world order in golf could shake out. But some things are known.

The European Tour has been “rebranded” and is now the DP World Tour, named for a shipping logistics company, DP World, that is based on Dubai.

The Asian Tour is more prominent than it has ever been before. In about five weeks, the annual early-February tournament in Saudi Arabia, the Saudi International, now the so-called flagship event of the Asian Tour, will feature a significant number of the most prominent players in the world, including Mickelson.

In October, Greg Norman, a longtime proponent of a world golf tour, was named CEO of a new company called LIV Golf Investments that is a new backer of the Asian Tour. (LIV Golf Investments is funded by a Saudi investment fund with vast amounts of money called the Public Investment Fund. The fund’s chairman is Mohammed bin Salman, who was linked to the death of the Saudi critic Jamal Khashoggi.) LIV Golf has said it will back a series of 10 Asian Tour events over the next decade.

In recent weeks, LIV Golf has sent out a series of press releases that have announced various new LIV Golf employees, including Carlton “Slugger” White, the retired veteran PGA Tour rules official. But what LIV Golf has not revealed is what is getting the most attention.

A number of credible reports have said that LIV’s ultimate goal is to start a world tour that will feature simultaneous team and individual competitions featuring small fields and enormous purses.

Are you feeling overwhelmed yet?

Jay Monahan, the PGA Tour commissioner, is fighting fire with fire, for now. The Tour has announced that the total purse for all PGA Tour events in 2022 will be $60 million higher than it was in 2021, up to $427 million, from $367 million.

(The Tour did not say where the money is coming from, except to say it was in the Tour’s “reserves.”)

The pool of comically secretive PIP money will be go from $40 million to $50 million. This is the popularity contest performance pool that distributes money to the 10 players that are most engaged with fans, measured largely via internet traffic.

(If there is a god, Jim Herman will finish first, cash his check and tweet out how he will spend part of it at a family dinner at a strip-mall Italian restaurant near his Florida home.)

FedEx Cup playoff money is now $75 million, up from $60 million. Where the winner used to get $15 million, the winner will now get $18 million.

There’s another — new and improved and doubled! — $20 million bonus pool for the top-10 players in the FedEx Cup regular season standings in 2022.

If this sounds like a rat-race, it is. It’s grubby. It has nothing to do with why any of us are drawn to golf in the first place. But it’s also really nothing new. It just sounds different because of all these new “revenue streams.”

And here come the non-fungible tokens.

The only thing that’s actually new here is the language being used and the countries where these golf stories are unfolding.

Thirty and 40 and 50 years ago, when the leading “foreign” players felt like they were good enough, when they wanted good practice balls and low-mileage courtesy cars and the best competition — plus, most tellingly, the biggest purses in golf — they came to U.S.

That’s how Tony Jacklin (an Englishman) found his way here, as well as Isao Aoki (from Japan) and Seve Ballesteros (from Spain) and Bernhard Langer (from Germany) and Greg Norman (from Australia). It was, in golf, still the era of American hegemony.

Yes, of course, all these name players were in the field. It was Pebble Beach, golf’s most celebrated pro-am. You couldn’t make more money playing anywhere else that week, and you might get some good business advice along the way. They came because they were professional golfers. There aren’t many job titles that are preceded by an adjective, but professional golfer is one of them. Pro golfers have followed the money forever.

The international players in the field are similarly familiar names, including Abraham Ancer, Paul Casey, Ian Poulter and Lee Westwood.

The Saudi event will be on Golf Channel.

The AT&T event will be on CBS.

The AT&T event will feature one of the most beautiful courses in the world.

The Saudi event will feature golfers whose names and swings and histories you know.

So which one will you watch?

In professional golf, money always leads the way. We, the community of golf fans, pay all the bills. There’s nothing really new here.

But you could also make the case that a bomb will drop on professional golf before too long here. Because when it’s all said and done, golf is a niche sport with a small following and small supply of elite professional golfers. There’s just not that much supply to go around. How many active, male professional golfers are there in the world that ordinary fans have some kind of emotional investment in? Not more than 100 and likely not even close to that.

Tiger Woods likes to say that Father Time is undefeated. Supply and demand is, too.