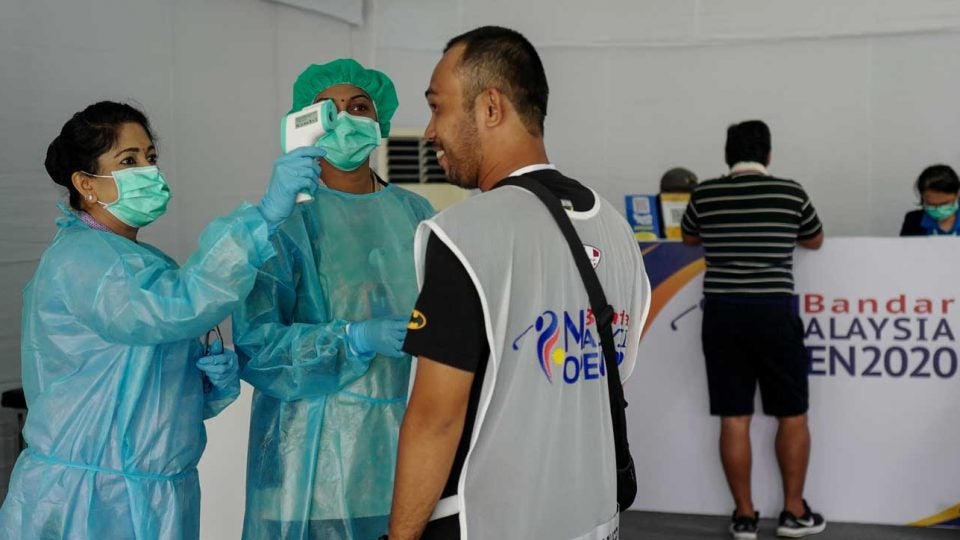 Medical personnel screening a photographer at a golf tournament in Malaysia earlier this month.
Getty Images

While some real-world problems don’t manifest themselves on the PGA Tour, the impact of the coronavirus undoubtedly will.

With the virus spreading across the United States (particularly on the coasts), all kinds of large gatherings and events have been canceled or postponed. From major music festivals to sporting events, there is an increasing public pressure to avoid congregating. So, what will golf and its governing bodies do with the upcoming schedule of events attended by tens of thousands, many of whom cram up against one another along gallery ropes and in grandstands?

For now, golf’s tournament-organizing bodies are proceeding with the status quo, but the pressure is increasing. Major U.S. sports leagues, including the NBA, MLB and NHL, are limiting media access to players and barring non-essential people from locker rooms. In the tennis world, organizers cancelled the prestigious Indian Wells tournament, the game’s so-called fifth major. When, if at all, will golf follow suit?

PGA Tour Commissioner Jay Monahan discussed as much in his Players Championship press conference Tuesday, saying simply, “It goes without saying that the health of everyone involved in our ecosystem is of the utmost importance. This is a market-to-market exercise.” (On Monday, Monahan appeared on CNBC’s Squawk Box to trumpet the Tour’s new TV deal and spent most of his time fielding difficult questions about the virus.)

The next six months of the Tour schedule includes events run and managed by various groups. It is indeed “market-to-market,” with four men’s majors, five women’s majors, an Olympic Games event and countless other tournaments. There are numerous voices, sponsors, host cities, host countries, etc., involved — and they’re all watching each other.

The R&A, which oversees the British Open, postponed the Women’s Amateur Asia-Pacific Championship in early February. As for its marquee championships in July, it said in a statement that it is “proceeding with our plans … [and] are continuing to monitor the situation…”

The PGA of America announced that it, too, was “monitoring the situation.” Its PGA Championship will be held in San Francisco in mid-May, at a municipal course. That distinguishing factor is important, as San Francisco recently recommended that large, non-essential gatherings be canceled or postponed. Is the PGA Championship essential? We weren’t asking that question a month ago.

The USGA, which conducts one of the most robust qualifying schedules in the world for the U.S. Open, said in a statement this week it has “no plans to alter the USGA Championship schedule,” but plans to “establish protocols as needed to promote the health and well-being of all participants involved.”

Could we see a U.S. Open without fans standing on the edge of the ropes? Grandstands empty? What would that look like at Winged Foot? New York just created a “containment zone” in New Rochelle, about four miles from the 2020 U.S. Open host site.

Just last week the European Tour canceled the Kenya Open. That organization co-manages the operations of the World Golf Championships, one of which takes place in Austin, Texas, in two weeks. About eight miles away, one of the largest music festivals in the world (attended annually by more than 100,000) has been nixed. Should a golf event attended by 50,000 be any different?

Market-by-market, to use Monahan’s terminology, could mean week-to-week. It also could mean one big market will decide for many of the others. The Masters is scheduled to take place in 30 days, but Augusta National Chairman Fred Ridley said last week that the tournament (and its preceding events) will go on despite the threat of the coronavirus.

Did he speak too soon?